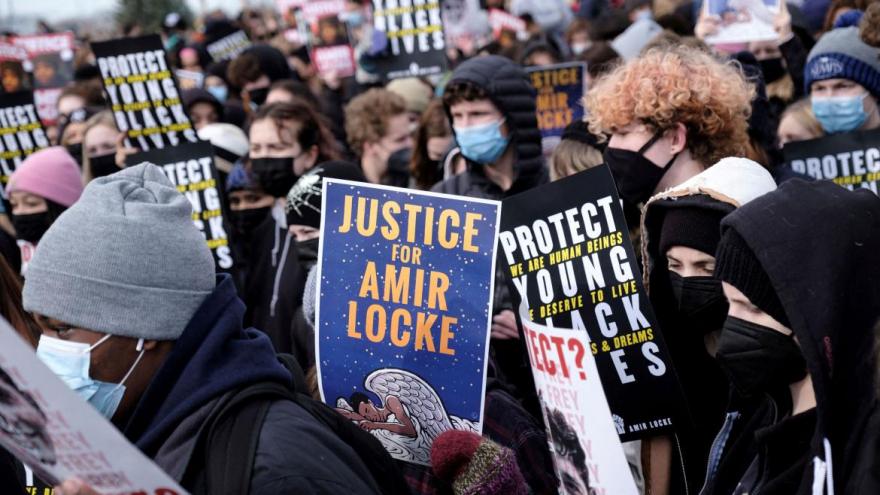 Students in Minnesota participate in a state-wide walkout demanding justice for Amir Locke.

(CNN) -- Members of the Minneapolis community gathered Thursday to honor the life of Amir Locke, a 22-year-old Black man whose killing at the hands of police during the execution of a no-knock warrant has reignited debate around the controversial practice.

Locke's mother, Karen Wells, reiterated her family's request to pass a law to do away with no-knock warrants in her eulogy at her son's funeral.

"At the end of the day you are going to pass the law of the no-knock warrants, ban it starting here in the Twin Cities where my son was born and raised," Wells said.

Ben Crump, an attorney for the Locke family, also called out Minneapolis Mayor Jacob Frey for not banning no-knock warrants.

"If you would have followed your ban on no-knock warrants like you said, let's be clear, Amir Locke would still be here," Crump said.

CNN reported in November that Jacob and then police chief Medaria Arradondo announced they were instituting a policy that required officers to announce their presence and purpose before entering a building, except in special circumstances.

At the end of the service, Amir's father, Andre Locke, said he was broken and called on Minneapolis police to "do what's right" and to stop "hiding behind the blue."

Police shot and killed Locke February 2 in a Minneapolis apartment while they executed a warrant in which he wasn't named, and that didn't require police to knock and give any occupant a chance to open the door.

A brief body camera video of Locke's shooting shows an officer quietly sliding a key into the apartment's door. After the door opens, a group of officers barge in, yelling commands. Locke, who appeared to be sleeping, gets up holding a gun his family said he legally owned. Police then opened fire.

Locke's parents have asked President Joe Biden to advocate for a national ban on such warrants in the name of their son.

This week, a division of Minneapolis' Civil Rights Department announced it is leading a "special review" of the police department's no-knock warrant policy.

The Office of Police Conduct Review will "focus on identifying and recommending specific changes and improvements to departmental policy and procedures," the city said in a news release.

"This important review will complement our engagement with external experts to provide needed clarity around the impacts of these policies for both community and officers," Minneapolis Mayor Jacob Frey said.

Meanwhile, the officer who shot Locke, Mark Hanneman, has been placed on routine administrative leave pending an ongoing state investigation.

During the raid that killed Locke, Minneapolis police were looking for suspects -- including Locke's teenage cousin -- and evidence connected to a homicide in neighboring St. Paul, according to warrant applications.

Locke was not named in the no-knock warrant, and his family says he acquired his firearm legally.

The video of Locke's shooting released by the city was 14 seconds long.

In it, officers are heard yelling, "Police! Search warrant!" during their morning entry into the apartment.

He begins to try and stand up, still wrapped in blankets, and is seen holding a gun, according to the footage. And then three gunshots are heard from officers.

The shooting death of Breonna Taylor during a no-knock warrant service in Louisville, Kentucky, in March 2020 and the murder of George Floyd by a Minneapolis police officer two months later were catalysts for a nationwide reckoning over police policies.

Days after Locke's shooting, Frey imposed an immediate moratorium on the request and execution of no-knock warrants. But his announcement highlighted such warrants can still be implemented if there is "an imminent threat of harm to an individual or the public and then the warrant must be approved by the Chief."

Examples of those circumstances include hostage situations and extreme domestic violence situations in which an officer may have to protect someone from the threat of severe bodily harm, he said.

"We have to challenge them not to put a Band-Aid over no-knock warrants," Locke family attorney Jeff Storms told CNN. "They need to take this step and completely ban no-knock warrants. It's not safe for either side of the door."