Families separated at the border could be reunited in US, Homeland Security secretary says 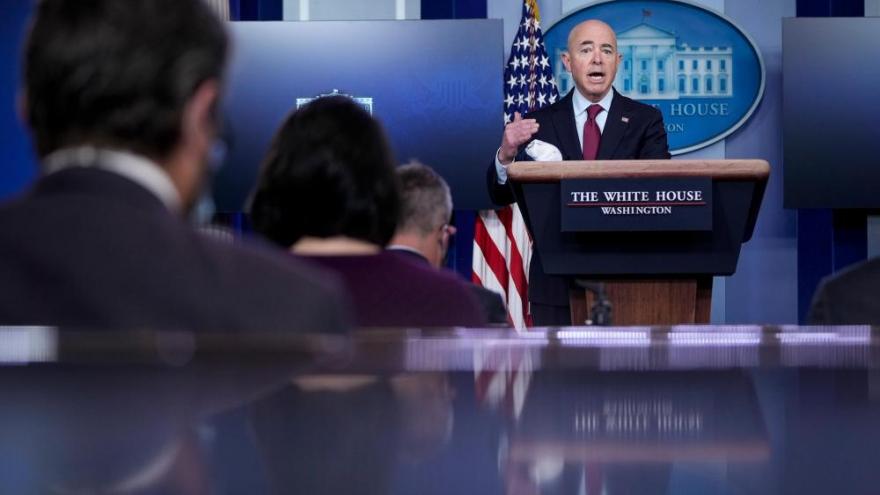 Mayorkas, who's leading the family reunification task force established by President Joe Biden, said the administration hopes to reunite separated families in the US or in their country of origin.

"We hope to be in a position to give them the election. And if in fact they seek to reunite here in the United States, we will explore lawful pathways for them to remain in the United States and address the family needs," he said at the White House press briefing.

"The prior administration dismantled our nation's immigration system in its entirety," Mayorkas said. "It takes time to rebuild an entire system and to process individuals at the border in a safe and just way."

The administration is working closely with counsel for separated families, along with other partners, to chart a path forward.

"We are doing it along with the countries of El Salvador, Guatemala, and Honduras ... We are doing it with non-governmental organizations. And we intend to and will shortly harness the capabilities, resources and desire of the private sector," Mayorkas added.

Lawyers are still trying to locate the parents of nearly 500 children who had been split from their families at the US-Mexico border by the Trump administration, according to attorneys -- down from a month ago, when attorneys were looking for the parents of 611 children.

'They need to wait'

Mayorkas reiterated the administration's message that migrants should not come to the US now, telling reporters Monday, the department is working to rebuild its asylum and humanitarian programs.

"They need to wait. It takes time to rebuild the system from scratch. If they come, if families come, if single adults come to the border, we are obligated to, in the service of public health, including the health of the very people who are thinking of coming, to impose to travel restrictions under the CDC's [Centers for Disease Control and Prevention] Title 42 authorities and return them to Mexico and we have done that," Mayorkas said. "We need individuals to wait."

Last year, as the pandemic gripped the country, the Trump administration invoked a public health law allowing border officials to turn away migrants apprehended at the border, including children, resulting in a low number of unaccompanied children being admitted to the US.

The Biden administration is no longer returning unaccompanied minors under the health law. However, families and single adults are subject to the policy.

Mayorkas said the goal is to rebuild a system "as quickly as possible" to enable potential migrants to access humanitarian relief from their countries of origin.

"We are not saying don't come, we are saying don't come now because we will be able to deliver a safe and orderly process to them as quickly as possible," he added when asked how long it will take to rebuild the department and processes.

When pressed by CNN's Jeff Zeleny on how specifically the administration is conveying that message to families that want to travel to the US, Mayorkas said, "We are flooding the space with that critical message."

He said the department is working with non-governmental agencies and others to communicate to migrants, along with Northern Triangle country governments of Honduras, El Salvador and Guatemala.

"It's very difficult to know those whom we have successfully deterred," he conceded, "but our understanding is that it does work to a degree."

Asked about plans to do Covid-19 testing for migrants, Mayorkas said the extraordinary weather in Texas created an "unexpected stress on our system."

As a matter of process, individuals and families are brought into Immigration and Customs Enforcement Custody and are tested in ICE custody, he said. But he did not address testing in US Border Patrol custody or testing for unaccompanied migrant children that don't go into Health and Human Services custody, not ICE.

'It's a stressful challenge'

Asked whether there's a border crisis, Mayorkas said no, calling it instead a "challenge."

"We are challenged at the border. The men and women of the Department of Homeland Security are meeting that challenge. It is a stressful challenge. That's why quite frankly we're working as hard as we are, not only in addressing the urgency of the challenge but also in building the capacity to manage it," he said.

He cast blame on the Trump administration for dismantling the nation's immigration system, repeatedly underscoring that the system was "gutted." He cited to plan to bring migrants in the "Remain in Mexico" program back to the US as one part of the strategy to rebuild the immigration system.

The department has expanded returns for people forced to wait in Mexico to three US ports of entry, with one that can manage 100 individuals a day, he said.