Families are 'self-separating' in Mexico after being expelled from the US, Border Patrol says 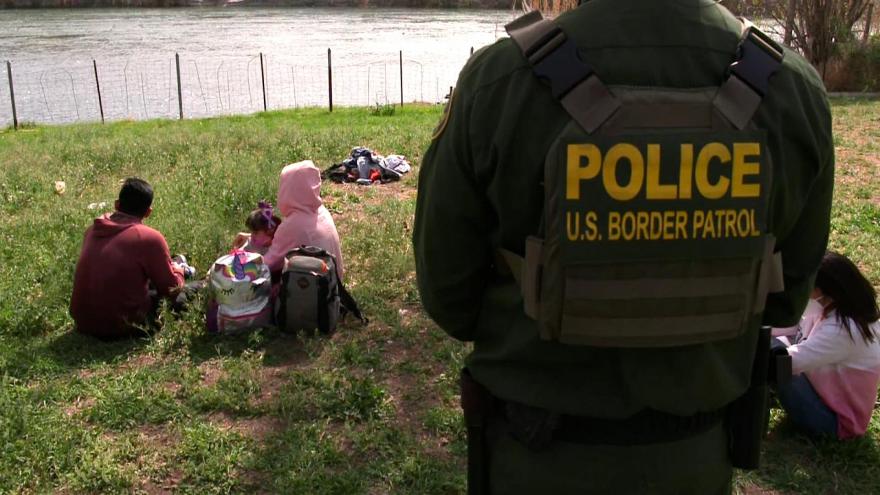 Migrant families are "self-separating" in Mexico, sending children alone to cross into the United States after first having been expelled, the US Border Patrol's chief patrol agent of the Rio Grande Valley sector told CNN.

(CNN) -- Migrant families are "self-separating" in Mexico, sending children alone to cross into the United States after first having been expelled, the US Border Patrol's chief patrol agent of the Rio Grande Valley sector told CNN.

"What we are seeing, more and more, is the families are self-separating in Mexico," Brian Hastings, who leads the busiest Border Patrol sector in the US, said in an interview Monday.

From February 24 to March 23, there were 435 incidents in the south Texas region where children were apprehended crossing the border alone after previously being expelled with their family as a part of the pandemic health order "Title 42," based on intelligence that Border Patrol gathered from unaccompanied children who entered their custody, according to Hastings.

The Biden administration has had to contend with a growing number of migrant arrivals that have overwhelmed resources and resulted in crowded conditions. The situation has also contributed to children spending prolonged periods in Border Patrol custody, beyond the 72-hour legal limit.

To underscore the concern over the danger associated with the increase in unaccompanied children, Hastings shared a video of a 10-year-old who he says was found alone in a field on the morning of April 1, after being left by the group he was traveling with.

"Can you help me?" the boy asks a Border Patrol agent after a farmer spotted the boy and alerted authorities. Video provided to CNN by the agency shows what appears to be Border Patrol initially encountering the boy who says he's afraid.

He had been traveling with about 80 other individuals, without parents, according to Hastings. The boy had been left for approximately four hours, said Hastings, adding "when he woke up, he didn't know where he was or where to go or what to do."

The full circumstances of the 10-year-old are unknown, including the how and why he came to the US. It is also unknown whether this is a case of self-separation.

These kinds of incidents are unfortunately becoming "commonplace," said Hastings, adding that children have been found on the riverbank with a phone number written on their on their garment, while others have been kicked out of rafts by smugglers.

In the Rio Grande Valley sector, there have been around 167,000 encounters since the start of the fiscal year in October, nearly 26,000 above the same timeframe in 2019, during the previous border influx.

"We just continue to see the numbers grow," he said.

More than 22,000 unaccompanied children have been taken into custody in the region this fiscal year. The number of families coming into the area is increasing "very rapidly," Hastings said, of the current demographics.

Amid the most recent influx at the border, the Biden administration has continued to rely on a Trump-era health law, known as Title 42, that allows federal officials to swiftly expel migrants during the pandemic, rather than go through immigration or asylum processes in the US.

But the administration has made an exception for children, who are transferred to US Health and Human Services. "The only people we're not going to let sitting there on the other side of the Rio Grande by themselves with no help are children," President Joe Biden said during a recent press conference.

That effort to spare children from waiting in Mexico may have had an unintended consequence as it appears some families have decided to make the heart-wrenching decision to send their children across the border without them.

The Border Patrol is encountering children who were previously apprehended with a family member and expelled under Title 42, and then re-entered the US alone, Hastings said, "knowing that they're going to be put into HHS custody."

Hastings said the agency is attempting to gather as much intelligence to determine the current trends and traffic patterns, but said, it's "very difficult when you have this many people" to interview everyone in custody, given the large volume of people.

Under the Trump administration, hundreds of children who had initially arrived to the US southern border with family later crossed alone after being subject to a policy that forced migrants to wait in Mexico until their US court date, often in dangerous conditions.

Last week, CNN reported that US Customs and Border Protection encountered a record number of unaccompanied minors in March, according to preliminary data, highlighting the concerning upward trend.

The Biden administration has scrambled to set up emergency sites to house migrant children, many of whom have been in overcrowded conditions. CBP is operating two large temporary tent facilities to help manage the influx of migrants crossing the US-Mexico border, including one in Donna, Texas, located in Hastings' area of responsibility.

Despite the new facilities, the administration has struggled to move children quickly out of border facilities and into more appropriate HHS care.

"We have been working very hard with our partners with HHS trying to get them to keep up with as high activity level," said Hastings. "But they need to step it up and they're working hard to do that."

Over 350 kids are apprehended on average per day in the region, Hastings said. "It's not keeping pace," said Hastings of the number of HHS facilities opening compared to the large number of children arriving.

The 10-year-old, found on Friday, is well, Hastings said, and was in CBP custody as of Monday. The agency was working with HHS to turn him over to HHS's care "as quickly as possible."

At the end of March, after calls for greater transparency, the administration allowed a few members of the media to tour a temporary CBP facility in Donna, Texas, a part of the sector Hastings oversees. Inside the cameras caught children lying side by side in plastic-lined pods, shelves stocked with supplies, and scores of people waiting to be processed by immigration authorities.

The facility remains well over capacity, with around 4,200 migrants, the majority children, at the facility Monday morning, despite a pandemic capacity of 250. It was built to hold only 1,500 people, regardless of pandemic guidelines.

Many families have also been allowed to remain in the US, since the State of Tamaulipas, Mexico, which is south of the Rio Grande Valley, will not accept certain family members for expulsion from the US. The influx of families, coupled with the large number of children, is straining resources and capacity, said Hastings.

To relieve pressure on the region's staff and facilities, some migrant families are bussed or flown to other regions of Texas, primarily Laredo and El Paso. In other cases, the agency will release families without a "notice to appear," saving hours in paperwork to speed up processing and get people out of government custody quicker.

The situation has been "overwhelming to agents," said Hastings, particularly of the Donna facility, where 500 people are crammed into plastic pods, which are meant to hold around 38 people.

"It's very difficult, very hard on folks who are husbands, fathers, grandfathers, grandmothers to see this amount of kids in our custody," he said, echoing something the administration has repeatedly said: "the Border Patrol facility is not the place for anybody to be, especially kids or families for a long term."