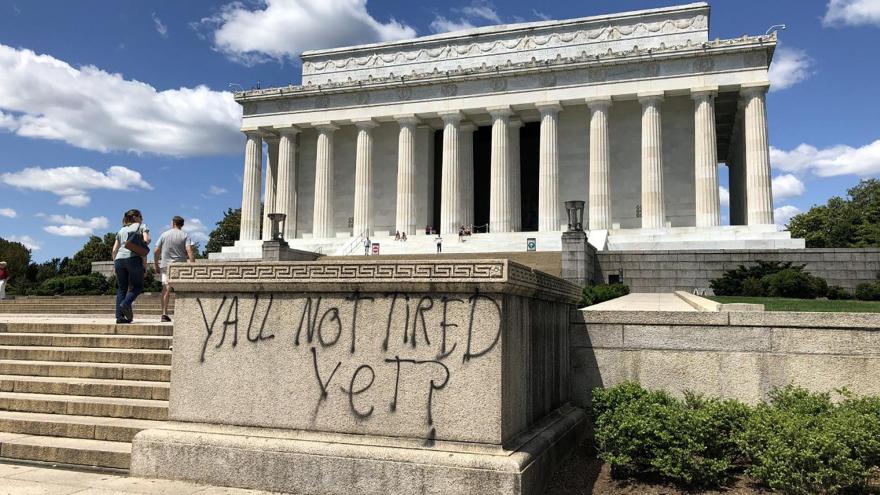 Graffiti from Saturday night protests on Lincoln Memorial in Washington.

(CNN) -- Popular landmarks across Washington, DC, were defaced with graffiti during the second consecutive night of protests in the nation's capital over the death of George Floyd, an unarmed black man in Minneapolis who was pinned down by police.

"For generations the Mall has been our nation's premier civic gathering space for non-violent demonstrations, and we ask individuals to carry on that tradition."

The vandalism appeared after skirmishes between groups of protesters and law enforcement flared across the city Saturday night.

Some protesters gathered in downtown Washington, DC, at Lafayette Square, which is across from the White House, into the evening, but additional protesters were not allowed in by police. At times there were attempts by some protesters to enter the park. They were met with pepper spray or other mechanisms pushing them back.

Separately, a group marched and then rallied at the Lincoln Memorial where the words "Yall not tired yet?" were spray-painted.

The question "Do black Vets count?" also appeared to be spray-painted across part of the National Mall World War II Memorial.

DC Chief of Police Peter Newsham said Sunday that the Metropolitan Police Department had arrested 17 people Saturday night and that 11 MPD officers were injured during the protests.

None of the officers sustained life-threatening injuries, though one officer is undergoing surgery for multiple compound fractures to his leg after a protester threw a rock at him.

Newsham said that of the 17 people arrested, eight either live in DC or have some ties to the area.

He said police expect to make more arrests, as the department is asking private businesses to review their security footage, and will ask the DC community to help identify those who were damaging property or hurting people.