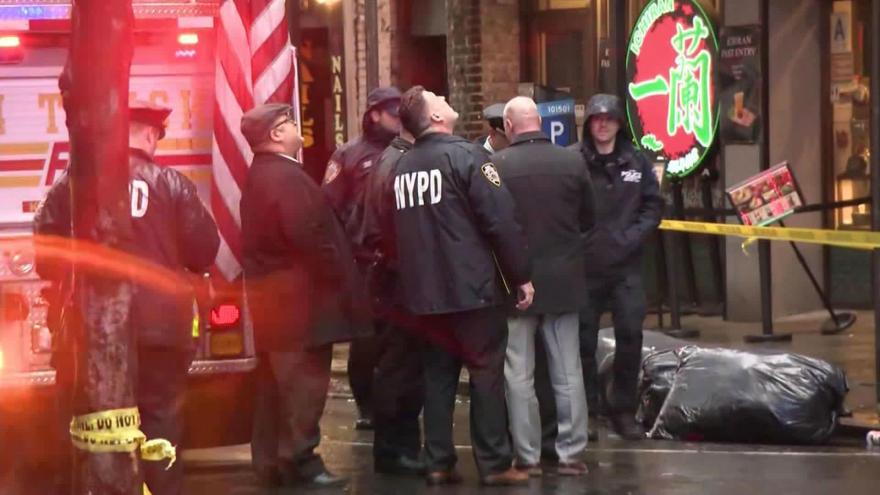 Authorities say the debris fell from a building at 729 7th Ave. in Manhattan.

(CNN) -- A 60-year-old woman was struck and killed by falling debris on a midtown Manhattan street Tuesday morning, according to New York police spokesman Ahmed Nasser.

The woman, identified by police as Erica Tishman, was pronounced dead at the scene by emergency services.

Tishman was a Manhattan architect and served on the Board of Directors for the Educational Alliance, CNN affiliate WABC reported.

"It is with great sadness that we write about the passing of Erica Tishman, an invaluable force and irreplaceable ally to our organization," Educational Alliance CEO and President Alan van Capelle said in a statement, according to the affiliate.

According to the firm's website, Tishman received her bachelor of arts from Princeton University and went on to receive a master's in architecture from Harvard Graduate School of Design.

There was "one word that encapsulates Erica: indefatigable," van Cappelle's statement said. "To every opportunity, meeting, or event, she always brought her full self. Her presence will always be felt in every corner of our organization."

'No pedestrian should be at risk from dangerous façade conditions'

Engineers will conduct a stability inspection of the building from which the debris fell "to ensure all New Yorkers are safe, and conduct a thorough investigation into the cause of this tragic incident," according to Department of Buildings spokeswoman Abigail Kunitz.

She could not confirm what the debris was or what caused it to fall.

"This is a tragedy, and the family and friends of the victim are in our thoughts," Kunitz said. "No pedestrian should be at risk from dangerous façade conditions."

The building was identified by the Department of Buildings and the New York City Fire Department, as 729 7th Ave., which houses Himmel + Meringoff Properties. The company manages the building.

According to city records, Department of Building inspectors issued a violation to the company in April because of a "failure to maintain exterior building façade."

The company paid a $1,250 fine in connection with the violation, which was listed as a Class 1 ticket, the highest level of severity, according to the department's website.

"We are saddened by this tragedy and our hearts go out to the family," Patrick Muncie, a spokesman for Himmel + Meringoff, told CNN. "The company will fully cooperate with the City in the ongoing matter."