Fact-checking the battle for credit over Pfizer's vaccine announcement 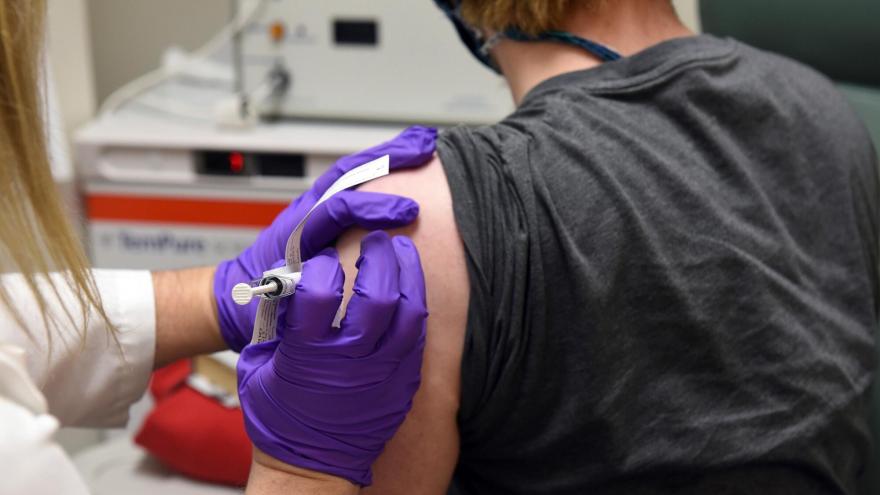 A patient enrolled in Pfizer's COVID-19 coronavirus vaccine clinical trial receives a shot at the University of Maryland School of Medicine in Baltimore.

(CNN) -- Pfizer sparked a stock market rally with its Monday announcement that early data shows its coronavirus vaccine is more than 90% effective. It also kicked off a battle over who deserves credit for the preliminary good news.

President Donald Trump's administration was quick to applaud itself.

"HUGE NEWS: Thanks to the public-private partnership forged by President @realDonaldTrump, @pfizer announced its Coronavirus Vaccine trial is EFFECTIVE, preventing infection in 90% of its volunteers," Vice President Mike Pence tweeted.

Others, however, pointed to the fact that Pfizer's senior vice president and head of vaccine research and development, Kathrin Jansen, publicly distanced the company from the Trump administration's Operation Warp Speed vaccine initiative. Jansen was quoted Monday by The New York Times as saying, "We were never part of the Warp Speed. We have never taken any money from the U.S. government, or from anyone."

Facts First: Pfizer's vaccine progress is certainly not solely attributable to the Trump administration's Operation Warp Speed public-private partnership program. But it was not accurate for Pfizer to suggest that it is operating entirely apart from Operation Warp Speed; the company has a major agreement to sell at least 100 million doses of its vaccine to the federal government, and Pfizer acknowledged in a Monday statement to CNN that it is in fact "participating" in Operation Warp Speed through this deal. Also, at least some independent experts say the Trump administration deserves partial credit for Pfizer's progress.

It's true that Pfizer, unlike some other pharmaceutical companies, did not accept federal money for research into a coronavirus vaccine. Pfizer, unlike these competitors, is not getting payments up front even before proving its effort has been successful.

However, the Trump administration agreed in July to buy at least $1.95 billion worth of a Pfizer vaccine, at least 100 million doses, if Pfizer does get a vaccine authorized by the Food and Drug Administration.

Three experts told CNN that this purchase promise may have played an important role in expediting Pfizer's vaccine development process. So after Pfizer's initial claim to the New York Times that it has never been part of Operation Warp Speed, CNN asked the company if there was any more nuance to the situation.

In response, Pfizer spokesperson Sharon Castillo provided a statement that said the company is indeed part of Operation Warp Speed.

"Pfizer is one of various vaccine manufacturers participating in Operation Warp Speed as a supplier of a potential COVID-19 vaccine," Castillo said in an email. "While Pfizer did reach an advanced purchase agreement with the U.S. government, the company did not accept (Biomedical Advanced Research and Development Authority) funding for the research and development process. All the investment for R&D was made by Pfizer at risk. Dr. Jansen was emphasizing that last point."

There is a lot we still don't know about the Pfizer vaccine. The company issued the Monday news via press release, and because it is interim data, not a final analysis, there is no peer-reviewed study yet available. Final, peer-reviewed data won't come until the company is ready to ask the FDA for emergency use authorization.

We also do not know exactly what happened behind the scenes at Pfizer, so we can't definitively pinpoint the extent of any influence the US government had on its development timeline. In addition, it's worth noting in response to Pence's tweet that Pfizer's partner on the coronavirus vaccine, German company BioNTech, received significant funding from the German government -- and that Pfizer and BioNTech have purchase agreements with other countries in addition to the US.

Still, three experts contacted by CNN said the US federal government likely played a significant role in the progress of the vaccine. (Another expert disagreed.)

Dr. Robert Wachter, professor and chair of medicine at the University of California, San Francisco, said that the federal government's advance guarantees to purchase large quantities of coronavirus vaccine from Pfizer and from its competitors "de-risked the enterprise, for Pfizer and others." Wachter said the development of previous vaccines has been slowed by the fact that "the payoff at the end is uncertain and the companies are very risk averse."

"One might argue that Pfizer, recognizing that they were working on the most important problem in the world, would have been willing to go full-steam ahead in any case, but I think the federal dollars (with the promise of far more) clearly tilted the playing field toward rapid action," he said in an email.

Dr. Paul Spearman, professor and director of infectious diseases at Cincinnati Children's Hospital Medical Center, said he too thinks "Operation Warp Speed had influence on the Pfizer vaccine development program." He said the government's advance purchase agreement helped -- as did the competitive "pressure" he said was put on Pfizer by the speed at which a vaccine candidate from rival company Moderna, which did take federal research funding, was "moved along by Operation Warp Speed." And Spearman said Pfizer "definitely went along with the same or similar trial designs and endpoints as the other manufacturers," in consultation with the Food and Drug Administration.

Dr. Peter Hotez, co-director of the Center for Vaccine Development at Texas Children's Hospital and dean of the National School of Tropical Medicine at the Baylor College of Medicine, said, "I think Operation Warp Speed helped with the clinical trial design and helped provide the financial incentive, knowing that there was going to be an advance purchase commitment for the vaccine. I think those were critical elements."

Not everyone agrees. Dr. Michael Mina, assistant professor of epidemiology at the Harvard T.H. Chan School of Public Health, said he would "put the role of the US government low on the list" of what has helped Pfizer get to this positive preliminary result.

"Pfizer is a large enough company that in this case it was not the promise of purchase that enabled this early result and rapid acceleration of a vaccine. The global demand is such that with or without any sort of agreement to purchase vaccines, Pfizer would have very likely had the same path," Mina said in an email.