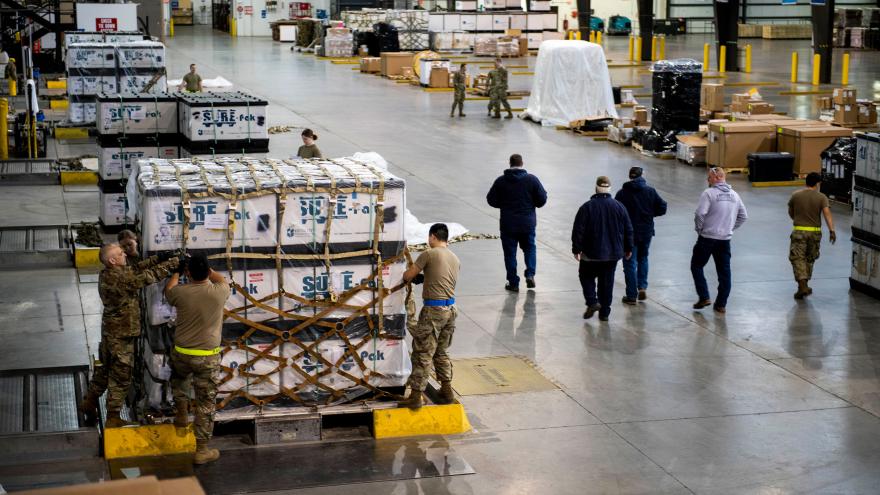 The last time Russia invaded Ukraine, then-President Petro Poroshenko also addressed a joint session of Congress and famously said in 2014 that "one cannot win the war with blankets," as part of an emotional plea for help arming his troops. In response, the Obama administration announced $46 million in security assistance to Ukraine, which included body armor and night vision goggles but no lethal aid.

Over the weekend, former President Donald Trump criticized the Obama-Biden aid efforts to Ukraine by saying, "They sent blankets. I sent Javelins."

Facts First:Trump's complicated history with aid to Ukraine aside, it's a misleading oversimplification for him to suggest his predecessor did not provide any military aid to Ukraine. While the Trump administration was the first willing to provide lethal weapons to Ukraine, the Obama administration did provide defense and military equipment. By March 2015, the US had pledged $75 million worth of equipment including UAVs, counter-mortar radars, night vision devices, medical supplies and 230 armored Humvee vehicles, according to the Pentagon's Defense Security Cooperation Agency.

As Biden contemplates what additional assistance to provide Ukraine in its latest fight with Russia, here's a look at the aid the US has previously provided Ukraine.

Since Russia first invaded Ukraine in 2014, the US has committed more than $3 billion in security assistance to Ukraine. These aid packages have included military equipment to "enhance Ukraine's defensive capabilities," according to a March 14 report from the Congressional Research Service.

Through the Presidential Drawdown Authority and the Department of Defense's Ukraine Security Assistance Initiative, the US has provided sniper rifles, grenade launchers, Javelins and small arms in addition to essential nonlethal equipment. The Biden administration in particular sent Stinger anti-aircraft weapons as part of the first PDA package of 2022 and has committed to redirect Mi-17 helicopters originally intended for Afghanistan through the Excess Defense Articles program.

Over the past year, the US has given more than $1 billion in total security assistance to Ukraine, according to a February 26 statement from Secretary of State Antony Blinken.

In 2021, Blinken authorized $260 million in military assistance to Ukraine and after the invasion began, he authorized an additional aid package of $350 million for "immediate support" for Ukraine.

Biden administration officials have said they are continuing to send security assistance to Ukraine, even as the Russian invasion continues. Just last week, Congress approved a $13.6 billion emergency aid package for Ukraine and lawmakers have indicated bipartisan support for more aid.

On Wednesday, Biden announced $800 million in new security assistance to Ukraine, which comes from the emergency aid Congress approved last week. According to the White House, the $800 million will provide Ukraine with 800 Stinger anti-aircraft systems, 100 drones, "over 20 million rounds of small arms ammunition and grenade launcher and mortar rounds," 25,000 sets of body armor, 25,000 helmets, 100 grenade launchers, 5,000 rifles, 1,000 pistols, 400 machine guns and 400 shotguns, in addition to "2,000 Javelin, 1,000 light anti-armor weapons, and 6,000 AT-4 anti-armor systems."