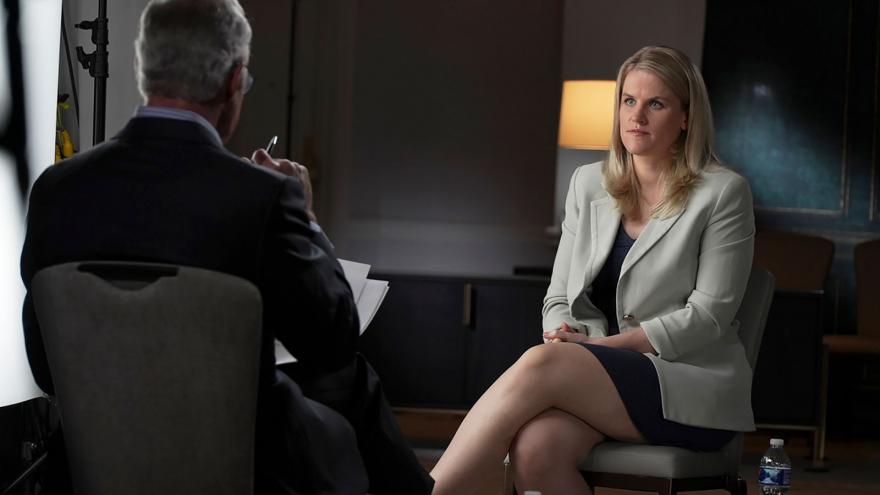 (CNN) -- The Facebook whistleblower who released tens of thousands of pages of internal research and documents indicating the company was aware of various problems caused by its apps, including Instagram's potential "toxic" effect on teen girls, is set to testify at a Senate hearing on Tuesday.

Frances Haugen, a 37-year-old former Facebook product manager who worked on civic integrity issues at the company, will face questions from a Senate Commerce subcommittee about what Facebook-owned Instagram knew about its effects on young users, among other issues.

In her prepared testimony obtained by CNN Monday ahead of her appearance, Haugen said, "I believe what I did was right and necessary for the common good — but I know Facebook has infinite resources, which it could use to destroy me."

Haugen added: "I came forward because I recognized a frightening truth: almost no one outside of Facebook knows what happens inside Facebook."

Haugen's identity as the Facebook whistleblower was revealed on "60 Minutes" Sunday night. She previously shared a series of documents with regulators and the Wall Street Journal, which published a multi-part investigation showing that Facebook was aware of problems with its apps, including the negative effects of misinformation and the harm caused by Instagram, especially to young girls.

She added that Facebook's leadership "won't make the necessary changes because they have put their immense profits before people."

Facebook declined to comment on the prepared testimony. In a statement sent to CNN Business after the "60 Minutes" interview, a Facebook spokesperson said, "to suggest we encourage bad content and do nothing is just not true."

Facebook is no stranger to scandals, and it's not the first time the company has been the subject of Congressional hearings. Nor is it the first time Facebook's public image has been shaken by a whistleblower. But Haugen's documents and upcoming testimony come amid broader scrutiny of Facebook's power and data privacy practices, and have already spurred bipartisan criticism of the company's influence on children. It remains to be seen, however, if it will create momentum for any meaningful regulation.

Beyond the documents, there's also the power of Haugen's personal backstory. She started at Facebook in 2019 after previously working for other prominent tech companies including Google and Pinterest. She spoke with the Wall Street Journal about losing a friendship due to online misinformation and how it impacted the way she thinks about social media. She also told the publication her goal in speaking out isn't to bring down Facebook but to "save it."

About a month ago, Haugen reportedly filed at least eight complaints with the Securities and Exchange Commission alleging that the company is hiding research about its shortcomings from investors and the public. She also shared the documents with regulators and the Journal, which published a multi-part investigation showing that Facebook was aware of problems with its apps, including the negative effects of misinformation and the harm caused by Instagram, especially to young girls.

"From her first visit with my office, I have admired her backbone and bravery in revealing terrible truths about one of the world's most powerful, implacable corporate giants," Democratic Sen. Richard Blumenthal, who chairs the Senate Commerce subcommittee on consumer protection, said in a statement Sunday after the "60 Minutes" segment aired. "We now know about Facebook's destructive harms to kids ... because of documents Frances revealed.

Antigone Davis, Facebook's global head of safety, was grilled by members of the same Senate subcommittee last week following the Journal report about the impact its apps have on younger users. Davis, who identified herself as a mother and former teacher, pushed back on the idea that the report was a "bombshell" and did not commit to publicly releasing a full research report, noting potential "privacy considerations." She said Facebook is "looking for ways to release more research."

The Journal report, and the renewed pressure from lawmakers in its aftermath, also appeared to force Instagram to rethink its plans to introduce a version of its service for kids under 13. Days before the hearing, Instagram said it would press pause on the project.

"Facebook's actions make clear that we cannot trust it to police itself," Blumenthal said in the statement Sunday. "We must consider stronger oversight, effective protections for children, and tools for parents, among the needed reforms."