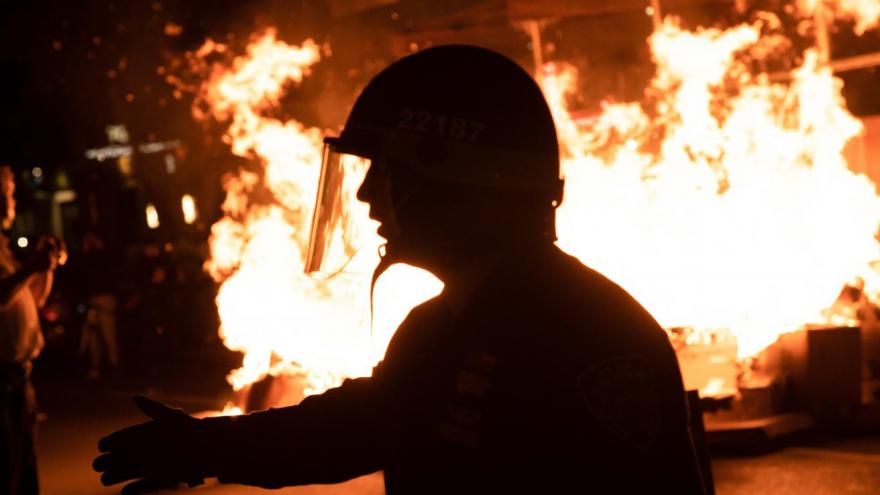 NEW YORK, UNITED STATES - 2020/05/31: Police officers force protesters off the street after a fire was lit during an anti police brutality march in Manhattan.A large anti-police brutality march demanding justice for the killing of George Floyd started peacefully in Brooklyn and ended in Manhattan with the first cases of looting since the protests began in the city. (Photo by Braulio Jatar/SOPA Images/LightRocket via Getty Images)

(CNN) -- Facebook said Tuesday that it had shut down pages and accounts associated with what it said was a hate group, whose members were discussing bringing weapons to the protests that are happening across the country.

The company said it had observed people associated with the group American Guard discussing such action.

The group says it is about American constitutional nationalism, but the Anti-Defamation League (ADL) says American Guard "has a background with connections to anti-immigrant extremism, hatred, and violence. Indeed, before the American Guard was the American Guard, it was actually the Indiana chapter of a group called the Soldiers of Odin USA, a branch of an extreme anti-immigrant and anti-refugee group that originated in Finland in 2015 and has spread to many other countries."

Facebook said it had also taken down accounts linked to the far-right group Proud Boys, though it said it had not seen posts from that group discussing weaponry.

The company said it had been planning on taking action against both groups, but had expedited the process when they saw how the groups were discussing the protests.

Staff who work as part of the company's teams combating dangerous and inauthentic organizations that operate on the platform spoke to CNN on Tuesday.

The staff said the company would take action on people using the platform to organize violence regardless of their political affiliation.

The fake account, @ANTIFA_US, tweeted Sunday, "ALERT Tonight's the night, Comrades Tonight we say "F**k The City" and we move into the residential areas... the white hoods.... and we take what's ours #BlacklivesMaters #F**kAmerica."

"Absolutely insane," Trump Jr. wrote on Instagram, sharing a screenshot of the tweet, "Just remember what ANTIFA really is. A Terrorist Organization! They're not even pretending anymore."

A spokesperson for Donald Trump Jr. did not provide comment to CNN Tuesday morning, but later the post was removed from Trump Jr.'s Instagram feed. There is no indication whatsoever that Trump Jr. knew who was behind the account or that it was fake.

Facebook said Tuesday night it had found some associated accounts on its platforms after Twitter shared information about the fake account — the accounts have been removed from Facebook, the staff said. The accounts had not been used recently, the staff added.