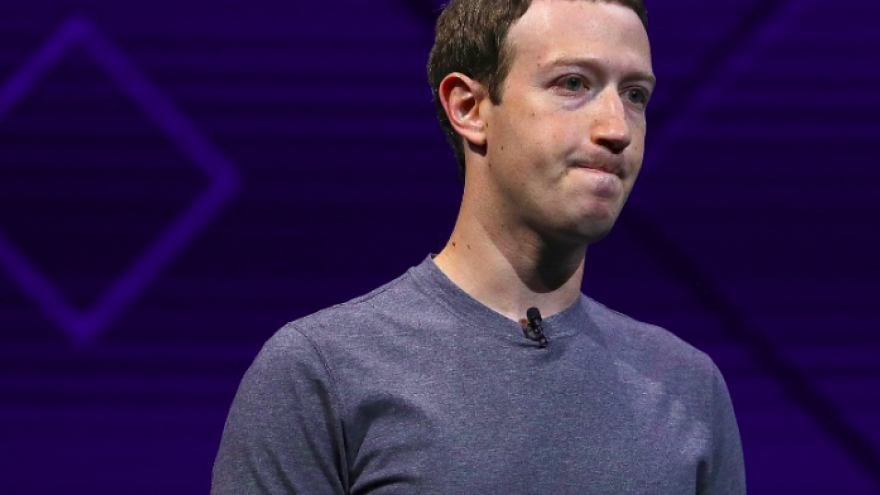 Facebook CEO Mark Zuckerberg says his company was too slow to spot or respond to Russian interference in the 2016 presidential election. He's also apologizing for a privacy scandal that allowed third-party apps to harvest the personal data of users without their consent.

Zuckerberg says in an opening statement to be delivered to congressional committees, "I started Facebook, I run it, and I'm responsible for what happens here."

He says that includes "fake news, foreign interference in elections, and hate speech, as well as developers and data privacy."

Zuckerberg says Facebook is an "idealistic and optimistic company." But he says Facebook didn't take a broad enough view of its responsibility. He says that was a "big mistake."

He's scheduled to testify Tuesday and Wednesday before Senate and House oversight committees.

Mark Zuckerberg says the company has a responsibility to make sure what happened with Cambridge Analytica doesn't happen again.

Zuckerberg, who is testifying before Congress this week, says in his opening testimony that the company has taken several steps to restrict outsiders' access to people's personal information on Facebook. The House Energy and Commerce Committee released the prepared remarks Monday.

Zuckerberg says the company is also investigating every app that had access to a large amount of information before the company moved to prevent such access in 2014 — something that came too late in the Cambridge Analytica case.

Facebook is under fire in the worst privacy crisis in its history after it was revealed that this Trump-affiliated data mining firm used ill-gotten personal information from 87 million users to try to influence elections.

Facebook has suspended another app firm that may have misused data, adding to a growing list of firms being investigated by the social media company.

Facebook says CubeYou, a firm associated with the University of Cambridge Psychometrics Centre, will be suspended after CNBC notified Facebook that CubeYou was collecting information about users through quizzes.

On Saturday, Facebook said it suspended AggregateIQ, a Canadian political consulting firm, amid media reports it had ties to Cambridge Analytica, a British data mining company accused of obtaining data from up to 87 million Facebook users to sway elections. Cambridge Analytica got its data through an app built by a University of Cambridge psychology researcher, Aleksandr Kogan.

The suspension comes as Facebook prepares to notify users Monday about whether their data had been accessed by Cambridge Analytica.

Facebook CEO Mark Zuckerberg is meeting privately with lawmakers on Monday ahead of his first time testifying on Capitol Hill.

Zuckerberg will testify in the Senate on Tuesday and in the House on Wednesday about the company's ongoing data-privacy scandal and how it failed to guard against other abuses of its service. He is also expected to be asked about Russia's use of social media during the 2016 U.S. election.

One of Zuckerberg's first meetings will be with Florida Sen. Bill Nelson. He is the top Democrat on the Senate Commerce Committee, which will hold a joint hearing Tuesday with the Senate Judiciary Committee.

Facebook CEO Mark Zuckerberg says the company is establishing an independent election research commission that will look into the effects of social media on elections and democracy.

The move comes as the social media service grapples with a government report that Russia tried to meddle with the U.S. elections in part by using Facebook. Facebook is also facing one of its worst privacy scandals in its 14-year history after it was revealed a data firm Cambridge Analytica misused data from up to 87 million users. Zuckerberg is preparing to testify before Congress beginning on Tuesday.

In a Facebook post, Zuckerberg said the commission will work with foundations across the U.S. to set up a committee of academic experts who will come up with research topics and select independent researchers to study them.

Apple co-founder Steve Wozniak is shutting down his Facebook account as the social media giant struggles to cope with the worst privacy crisis in its history.

In an email to USA Today, Wozniak says Facebook makes a lot of advertising money from personal details provided by users. He says the "profits are all based on the user's info, but the users get none of the profits back."

Wozniak says he'd rather pay for Facebook. He says "Apple makes money off of good products, not off of you."

Facebook CEO Mark Zuckerberg will testify on Capitol Hill on Tuesday and Wednesday about the company's ongoing data-privacy scandal and how it failed to guard against other abuses of its service.