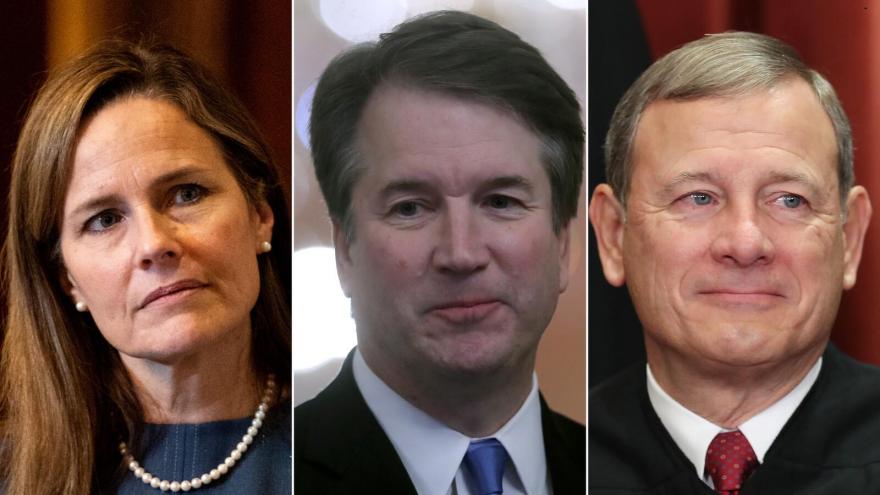 The remarks of three particular justices could foreshadow whether a majority will reinforce its support for Texas on the abortion ban.

(CNN) -- Since the challenge to a Texas abortion ban first reached the Supreme Court two months ago, the justices have conferred only in private over the law that flouts nearly a half century of abortion-rights rulings.

On Monday the internal debate goes public, as the nine hold oral arguments and air concerns about the ban's constitutionality or, alternatively, why they believe it is sound. Twice, the majority has rejected pleas to suspend the abortion ban.

In this round, the justices are not directly revisiting the constitutional right to abortion, established in 1973, but rather addressing the authority of judges to vindicate rights.

The paired lawsuits, brought by Texas abortion clinics and the US Department of Justice, come to the high court at a time when it has been flexing its new conservative muscle, with three appointees of former President Donald Trump.

The court has shown a new willingness to delve into controversies over abortion and guns and, as it demonstrated Friday, take up red-state-versus-blue-state cases on climate change and immigration, too.

Monday, the remarks of three particular justices could foreshadow whether a majority will reinforce its support for Texas:

• Chief Justice John Roberts, who tried in vain to persuade the court majority to suspend the ban and deescalate the controversy that polls suggest has hurt public approval of the justices. Now in his 16th year, Roberts has tried to protect the integrity of the court in the public eye, a task that grew more difficult in the Trump era.

• Justice Brett Kavanaugh, who had been most willing of the right-wing justices to join the chief in compromise but rejected his arguments in this case. Kavanaugh has in past abortion-related matters expressed ambivalences during negotiations but ultimately voted against reproductive rights; he has dashed Maine Republican Sen. Susan Collins' assertion during his 2018 confirmation fight that he assured her he would respect abortion-rights precedent.

• Justice Amy Coney Barrett, who faces her first test on the issue since being appointed in 2020 by former President Donald Trump. Barrett was a vocal opponent of abortion rights during her years as a Notre Dame law professor, and Senate Judiciary Committee chairman Lindsey Graham declared last year, "This is the first time in American history that we've nominated a woman who's unashamedly pro-life and embraces her faith without apology." Barrett, a devout Roman Catholic, told senators she could set aside any biases to decide cases impartially.

Under the Texas' SB 8, which took effect on September 1, abortions are banned once a fetal heartbeat is detected, at about six weeks of pregnancy, a point at which many women do not yet know they are pregnant.

But the law included a shrewd device intended to shield state officials in any court challenge: it empowered private citizens to sue anyone who performs an abortion or assists a woman in ending her pregnancy after six weeks. Anyone who successfully wins such a lawsuit could reap at least $10,000 in damages.

The key legal question Monday is whether a state can evade federal court review by delegating enforcement of the abortion ban -- or any other unconstitutional measure -- to private citizens.

Texas officials say they cannot be sued because the law stops them from enforcing the ban or causing any actionable injury. The clinics and Department of Justice counter that judges have authority to stop a state from enacting a blatantly unconstitutional statute that was designed particularly to thwart judicial review.

The Department of Justice also contends that the US government has a sovereign interest in protecting the supremacy of the Constitution. The Supreme Court in 1992 reaffirmed the 1973 Roe v. Wade decision that women have a fundamental right to end a pregnancy before a fetus becomes viable, that is, can live outside the womb, estimated at 22-24 weeks.

When the Supreme Court first permitted the Texas ban to be enforced in a midnight order on September 1, they split 5-4.

Roberts, a chief justice in the minority

Roberts, a 2005 appointee of GOP President George W. Bush, shattered what would have been a complete political and ideological split among the justices. Although he has opposed abortion rights in past cases, he expressed disapproval of Texas' route.

In language that has been widely quoted by challengers to SB 8, the chief justice called the ban "not only unusual, but unprecedented" and said that by delegating enforcement of the law "to the populace at large" the state appeared to be trying "to insulate" itself from any responsibility.

Unlike the liberal justices who dissented on September 1, Roberts avoided a focus on the women denied abortions in Texas and instead homed in on the role of the judiciary and Texas' attempts to stymie the system.

Roberts' longstanding pattern against abortion rights was broken in 2020, when he cast a crucial fifth vote (with then-four liberal justices) to invalidate a tough Louisiana credentialing regulation for physicians who performed abortion. The Louisiana law was similar to a Texas regulation the justices struck down four years earlier. Roberts had dissented in that case but said he would abide by precedent in the 2020 dispute.

That Louisiana case, June Medical Services v. Russo, was decided at a time of great Roberts' control: he was the justice at the ideological center, able to craft majority outcomes as he navigated between four conservative justices further to his right and four liberals. That changed in October 2020 when conservative Barrett succeeded the late liberal Justice Ruth Bader Ginsburg. A conservative super-majority was created, and as the Texas abortion dispute demonstrated, even if Roberts broke off, the right-wing could wield majority power without him.

The steady, tactical Roberts was unable to persuade just one of his fellow conservatives to join him (and the three liberals) for a majority vote to postpone the Texas law until they had received full briefing and heard arguments on the extraordinary ban.

The consequences of that moment will not be fully seen for months, as the 2021-22 session develops, but it suggested a new era for the bench informally known as the Roberts Court, one in which the chief justice could find himself regularly outflanked and bested by the justices on his right. They simply have the five votes.

It is similarly difficult to know what Kavanaugh, previously open to Roberts' overtures to move incrementally and avoid a public backlash, is thinking. Clues may emerge in Monday's hearing. He declined to write any opinion when the court let the law take effect.

Kavanaugh has, however, been consistently opposed to abortion rights.

In 2017, he dissented in a forceful opinion when the US appellate court on which he sat let a pregnant 17-year-old migrant at a Texas refugee center obtain an abortion, over objections from the Trump administration.

In an opinion that his Democratic critics said seemed designed to appeal to Trump as he was screening Supreme Court candidates, Kavanaugh highlighted government interests "in fetal life" and described the court majority as finding a new right to "immediate abortion on demand" for immigrant minors.

At the Supreme Court, during the 2020 Louisiana abortion case, Kavanaugh tried to persuade his colleagues to postpone any ruling on its merits and return the dispute to lower courts for additional fact-finding. When the majority declined to do so, Kavanaugh voted in dissent to uphold the Louisiana physician regulation.

In the Texas case, Kavanaugh again stuck with the justices on the right wing, this time for a majority.

Barrett, cautious since joining the bench

Barrett brings to her first major abortion case a mix of signals that make her more of a mystery. As a law professor, she spoke out against Roe but she has shown some caution as a jurist.

In 2006, while a Notre Dame professor, she had signed a statement that ran in the local newspaper decrying Roe's "barbaric legacy." Then in 2013, on the 40th anniversary of Roe, she signed a public statement calling for "the unborn to be protected in law."

At her 2020 Senate confirmation hearings, she declined to endorse a 1965 milestone decision that established personal privacy rights for couples who would use contraception and that offered a foundation for the 1973 Roe v. Wade opinion.

But Barrett declared she had no agenda to reverse abortion rights. "I have an agenda to stick to the rule of law and decide cases as they come."

In her first year at the Supreme Court, she has been consistently conservative but also cautious. Perhaps one of her most notable opinions was written in a dispute between the City of Philadelphia and Catholic Social Services, over a city non-discrimination policy that would have required the agency to screen gay couples to be foster parents.

The court unanimously ruled for Catholic Social Services but splintered as it resisted pressure from the far-right to reexamine a 1990 precedent that can sometimes disadvantage religious believers. That 1990 decision, known as Employment Division v. Smith, dictates that generally applied laws can be upheld as constitutional even if they infringe on the free exercise of religion.

Alito, joined by Thomas and Gorsuch, had argued that the court should immediately reconsider the "severe" ruling that has had "startling consequences" for religion. Barrett wrote an opinion (joined only by Kavanaugh) saying it was better to wait until the court had settled on a new legal standard to replace Smith.

"There would be a number of issues to work through if Smith were overruled," she wrote. "We need not wrestle with these questions in this case."

Barrett's votes in the Texas abortion dispute and a Mississippi abortion controversy to follow next month will fill in the contours of her approach. She appears also to be keeping an eye on the public response to the court's action.

About two weeks after the court first let the Texas law go forward, as public reaction concentrated on the justices' political and ideological preferences, Barrett gave the first major speech of her Supreme Court tenure.

A Gallup poll taken in early September, after the court first let the Texas abortion ban go into effect, had found that the Supreme Court's job approval rating had fallen 9 points. Only 40% of those polled said they approved of the way the court was doing its job. Gallup said it was a new low in its documented court trend dating to 2000.

After being introduced by Republican Sen. Mitch McConnell, Barrett told the Louisville audience, "My goal today is to convince you that this court is not comprised of a bunch of partisan hacks."