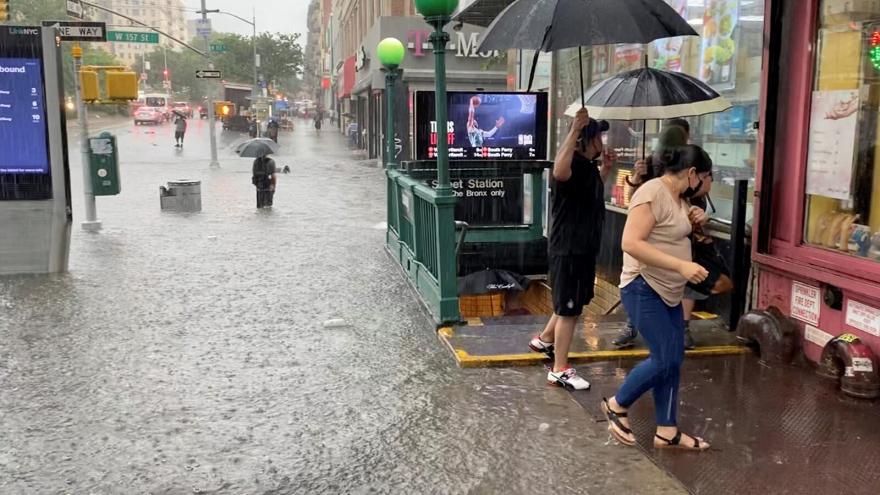 A person wades through floodwater as people exit the 157th St. metro station in New York City on July 8.

(CNN) -- America's infrastructure has taken a beating from extreme weather events in recent weeks spurred by climate change, raising concerns among officials that the nation's roads, bridges and even commercial flights can't stand the severe conditions.

With roads buckling in the Pacific Northwest, a deluge drenching a New York City subway station and fatal flooding across Europe, scientists say climate change is here and immediate action is needed. The country's crumbling infrastructure has commanded attention as the US has faced the unprecedented heat, drought and wildfires and the Biden administration has pushed costly proposals to address it.

"I think people see it, but I'm not sure they realize how much worse it's going to get and how quickly," Josh DeFlorio, head of climate resilience for the Port Authority of New York and New Jersey, told CNN.

On the West Coast, there is concern over the extreme heat that melted some of I-5 in Seattle last month and claimed the lives of hundreds in the Pacific Northwest and British Columbia. Western states have also faced an unprecedented, multi-year drought and as of Sunday, the US was grappling with 80 fires and complexes that had burned 1,157,976 acres so far, according to the National Interagency Fire Center.

Transportation Secretary Pete Buttigieg has called for improving infrastructure that can endure the effects of climate change.

"The simple reality that we need to have more climate resilient infrastructure and we need to stop climate change from getting any worse," he said last week while in Oregon to promote President Joe Biden's infrastructure framework.

Shane Underwood, who researches asphalt at North Carolina State University, told CNN that with the world getting hotter, road crews should start laying down asphalt that is more heat resistant.

"If temperatures are greater than we presumed they would exist when the pavement was designed, this can happen more frequently," Underwood said.

But while officials and scientists are calling for an infrastructure overhaul and swift action on climate change, the overlying issue is how to pay for it.

Negotiations on Capitol Hill over how to fund a massive bipartisan infrastructure bill, which includes $47 billion for climate change resilience, are intensifying. On Sunday, a Democratic aide confirmed to CNN that Republicans and Democrats in the bipartisan group have agreed to scrap an enhanced IRS enforcement provision after conservatives pushed back, endangering the group's ability to get a deal ahead of a procedural vote scheduled for Wednesday to advance the legislation.

Ohio Sen. Sen. Rob Portman, a Republican who's helping to negotiate the bipartisan proposal, told CNN's Dana Bash that the group of senators from each party working on the package was meeting again on Sunday to work through its details.

And provisions to address climate change are complicating Democrats' $3.5 trillion sweeping economic plan. The key element in the legislation, which is part of the party's two-track approach to accomplish Biden's sweeping social agenda, has drawn concern from Sen. Joe Manchin, a Democrat representing coal-producing West Virginia and Democrats' most pivotal swing vote in the Senate.

The climate provisions, though, are key to getting support from liberals, particularly in the House.