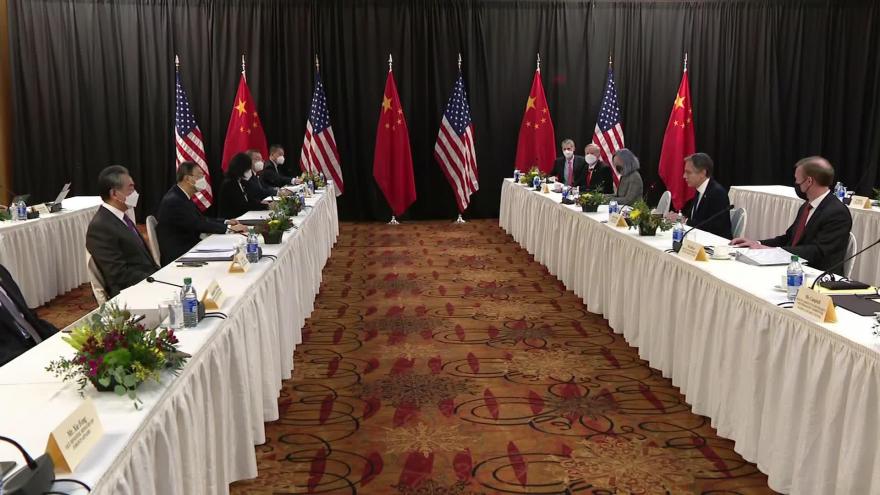 The US-China talks at the Captain Cook Hotel in Anchorage, Alaska, on March 18.

(CNN) -- Chinese officials dismissed Secretary of State Antony Blinken and national security adviser Jake Sullivan as "condescending." An unnamed US official said the Chinese were "grandstanding." And with that, any chance the US and China might shift course after four turbulent years of the Trump administration quickly faded.

The tense and unusual diplomatic clash Thursday between senior US and Chinese officials signals a tough road ahead as the world's two largest economies maneuver a relationship that is not going to improve easily or quickly, analysts said, and instead, may only get harder to navigate.

The typically dull prelude to diplomatic meetings spiraled quickly out of control in part because of mismatched expectations and because both sides delivered speeches meant just as much for their domestic audiences as for their counterparts.

The Biden administration wants to maintain a tough line on China, particularly on areas of sensitivity for Beijing, such as human rights, and is not likely to ease up with China hawks in Congress ready to criticize any sign of weakness. Meanwhile, Beijing is intent on signaling that it is not intimidated by the US or swayed by American claims to global leadership.

The testy start could make progress difficult in areas where the two nations have an interest in cooperating, such as trade, analysts said. "Overall," Birch concluded, Thursday's meeting demonstrates that "there is little scope for an improvement in US-China relations in the near term."

Blinken and Sullivan were in Anchorage to meet with China's foreign policy chief Yang Jiechi and State Councilor Wang Yi for two sessions on Thursday and a third on Friday. The event went awry right almost immediately when the two sides gathered for what is usually a ceremonial exchange of remarks before the press.

After Blinken's description of Washington's "deep concerns" about some of Beijing's human rights record and aggressive behavior overseas, Chinese officials ignored protocol to blast the US, the state of its democracy, and its record on racial justice. Blinken then countered with his own unscripted rebuttal. Both sides insisted cameras stay in the room to capture their remarks.

The two US officials raised a slew of issues, ranging from ongoing repression in Xinjiang that Blinken has called genocide to China's cyber attacks. But the speeches were likely meant as much for audiences at home as for each other.

In a long set of remarks, Yang made clear that China feels the US has no right to meddle in its "internal" affairs, claim a right to global leadership, or even to promote its vision for democracy and human rights, given the domestic controversy about the 2020 election and the injustices laid bare by US racial justice protests. "The US does not have the qualification to say it can speak from a position of strength," foreign policy chief Yang Jiechi scoffed.

Pointing to the "intensity" and "vociferousness" of Yang's rebuttal, Birch said, "it was probably meant to show China is not intimidated and it was a show of disrespect too -- China is making clear that it's not going to follow the rules."

A senior Republican aide suggested that Blinken and Sullivan were probably aware that lawmakers were watching too.

"They cannot afford to give them an inch right now," this aide said of the Biden administration's approach to China. "We all know China is now the biggest issue geopolitically, especially for the Hill on foreign policy. They could not give an inch. They had to be strong, they had to be tough."

It's not just Republicans the Biden administration has to be mindful of, the aide said. "If the administration is too weak on China," they said, "you may have a bipartisan group of people who may amp up and put restrictions on that effort, so there are domestic concerns they have to balance as well. The question is what happened behind closed doors."

Staffers for the Senate Foreign Relations Committee have asked the administration for readouts of the meetings on Monday. Sullivan said Friday they had been "tough" and that he and Blinken would return to Washington to consult with Congress and allies on the talks.

"We expected to have tough and direct talks on a wide range of issues, and that's exactly what we had," Sullivan said. Blinken said that, "on economics, on trade, on technology, we told our counterparts that we are reviewing these issues with close consultation with Congress, with our allies and partners, and we will move forward on them in a way that fully protects and advances the interests of our workers and our businesses."

Another factor contributing to the friction was the very different expectations the two sides had about the meetings.

"China was hoping for a reset and at least in theory was hoping to have one introductory, low-key meeting to set the tone," Birch said. "Obviously, with Blinken's comments, that possibility went out the window. The US team was coming in planning to discuss really sensitive issues for China -- its human rights record and territorial ambitions."

On Friday, President Joe Biden signaled that Blinken had his full backing, telling reporters he was "very proud" of the top US diplomat after his verbal showdown with the Chinese officials. Stephen Orlins, president of the National Committee on United States-China Relations, said that Biden's message of "unequivocal support" proves that, "this administration is not like the previous administration and speaks with one voice on China ... They are all reading from the same playbook."

By emphasizing the Biden administration's concerns about human rights and the threat China poses to smaller countries and US allies, Blinken and Sullivan also signaled that the Trump administration's transactional, trade-oriented, go-it-alone approach is over. Speaking to reporters on Friday, Blinken said he and Sullivan had two priorities for the talks.

"First: we wanted to share with them the significant concerns we have about a number of the actions that China's taken and the behavior it's exhibiting, concerns shared by our allies and partners. And we did that," said Blinken. "We also wanted to lay out very clearly our own policies, priorities, and worldview. And we did that too."

Blinken and Sullivan emphasized that they'll continue to work with China on areas of mutual interest, including Iran, North Korea and Afghanistan, but climate "is maybe the only real possibility for near term, substantial progress," Birch said. "It's the only real area where we see the two countries being aligned and where their partnership would spin well for both governments, whereas even a sign of cooperation on trade would be hard to sell at home, especially in the US."