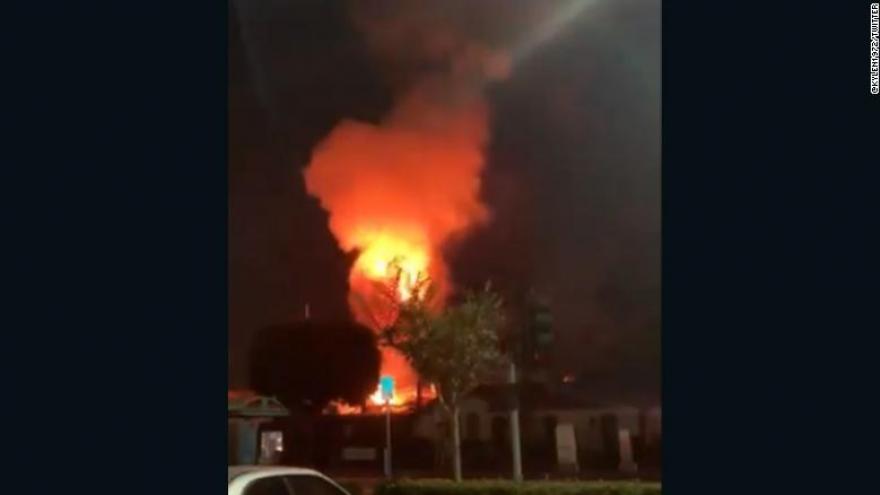 A series of three explosions took place during an Oktoberfest celebration at the Old World restaurant, where firefighters initially responded to a report of an electrical fire, Huntington Beach Fire Battalion Chief Jeffrey Lopez said.

Two firefighters and two civilians were initially reported injured in the explosion. All of the injuries are minor, Lopez said.

The first explosion took place around 8:20 p.m. when firefighters "had just barely walked up to the area involved," Lopez said.

"Two additional explosions occurred within minutes," he said. "Once the other fire crews arrived, they worked to ensure that the fire was isolated to the vault and to search the structure for any remaining occupants."

Video from witnesses shows a giant ball of fire erupting into the night sky. Witness Kyle Nelson told CNN affiliate KTLA-TV that he heard and saw three large explosions in rapid succession emanating from the festival. He managed to catch one of them on camera.

At the time of the first explosion, restaurant staff had blocked off the area around the vault because of a strange odor, Lopez said.

Investigators are working with the Southern California Edison power company to investigate the cause of the explosion and whether gas had anything to do with it because some patrons had reported smells of gas, Lopez said.

"The restaurant probably won't open up until next weekend," Lopez said.