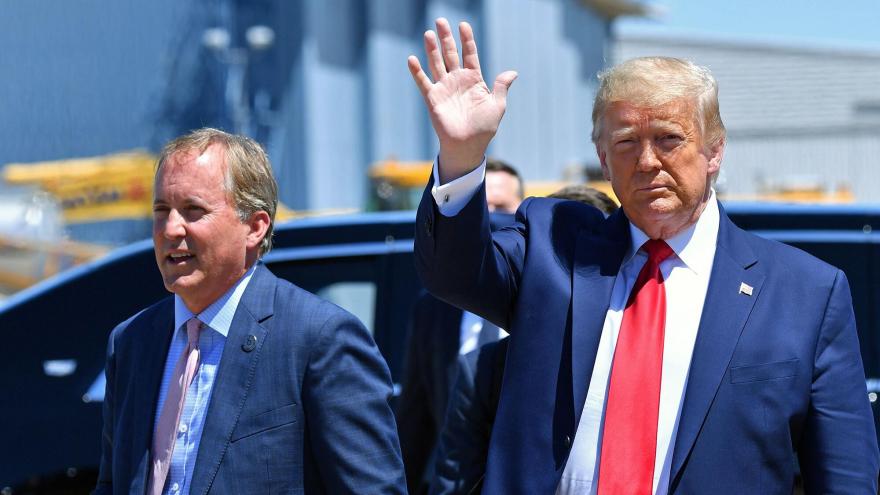 (CNN) -- Although all 50 states have certified their election results and the Supreme Court swiftly rejected an emergency request from Pennsylvania Republicans to block election results in the commonwealth, the justices are now grappling with a new controversial bid from Texas, supported by President Donald Trump and 17 other Republican-led states.

They are asking the Supreme Court for an emergency order to invalidate the ballots of millions of voters in four battleground states -- Georgia, Wisconsin, Michigan and Pennsylvania -- even though there is no evidence of widespread fraud.

Critics of the President and his allies say the case reflects an audacious and legally dubious gambit to keep the lawsuits flowing in order to prolong baseless claims that President-elect Joe Biden's victory was somehow illegitimate.

Texas Attorney General Ken Paxton filed the lawsuit Tuesday. The President on Wednesday filed a motion to intervene -- basically a request to join the lawsuit, asking for the same result. Seventeen GOP states are backing the effort as well.

What do the Republicans want?

Essentially, to swing the election to Trump.

They're asking for the court to block the electors from Georgia, Wisconsin, Michigan and Pennsylvania, pushing Biden back under the magic 270-vote total to win.

First the court would have to allow Paxton to file the suit. Then the court would have to block certification of the Electoral College vote, determine that the four states had allowed massive amounts of "illegal" votes, have the states revisit their vote counts and then resubmit the numbers. The court could also, Trump's filing suggests, let state legislatures determine who wins each state or throw the entire election to the US House of Representatives, where each state delegation would have one vote -- and since Republican delegations outnumber Democratic delegations, Trump would win.

Is there any precedent?

"In a nutshell the President is asking the Supreme Court to exercise its rarest form of jurisdiction to effectively overturn the entire presidential election," said Steve Vladeck, a CNN Supreme Court analyst and University of Texas Law School professor.

The Supreme Court has 6 conservatives. Does that guarantee Trump will win?

No. The court has thus far shown no desire to intervene in the presidential election.

On Tuesday, it rejected the plea from Pennsylvania Republicans to invalidate the state's presidential tallies. It issued one sentence and noted zero dissents. (Justices don't always have to make their votes public.)

Trump has suggested publicly that he hopes his nominees -- Amy Coney Barrett, Brett Kavanaugh and Neil Gorsuch -- will side with him on any election dispute. Conservative Justices Clarence Thomas and Samuel Alito are also ones to watch. No justice is required to recuse him or herself from the dispute; Barrett, notably, did not recuse herself in the Pennsylvania lawsuit.

When will we hear from the court?

The Supreme Court is going through standard procedural protocols, placing the case on its docket. Each of the four states responded Thursday afternoon. Pennsylvania's reply was blistering, accusing Texas of using a "cacophony of bogus claims" to support a "seditious abuse of the judicial process."

The court could act after those filings arrive or wait until Texas files a brief replying to the arguments made by the battleground states. The justices acted quickly in rejecting the Pennsylvania lawsuit on Tuesday, but they could bide their time as they have in other election-related cases.

They do "meet" Friday for their regular conference, now held over the phone.

Unlike a traditional cert petition (request for the court to hear a case), it will take five justices to agree to allow Paxton to file his suit.

If the court refuses to take up the lawsuit, it's another nail in the coffin for Trump's hopes to reverse his election loss.

If it acts in the other direction, it will be another dramatic and unprecedented turn in the 2020 election, guaranteeing the President will continue to challenge Biden's victory.

What is original jurisdiction?

Paxton seeks to file the lawsuit against other states, and in such instances he is allowed to come directly to the Supreme Court

So-called "original jurisdiction" cases are almost exclusively meant to handle inter-state disputes that can't be resolved elsewhere, such as border disagreements or suits over water rights.

Trump, in asking to intervene in the lawsuit, is basically using Texas' legal coattails.

But while Texas is using a shortcut to the Supreme Court, justices would have to agree that it can't be solved in other courts -- for instance, federal or state courts.

"There's nothing unique about Texas' claims here, most of which have already been brought in other suits against the same four states," said Vladeck, noting that if Trump and other states are joining in, it could weaken the suggestion the Texas case is unique.

Justices might be wary of opening the floodgates to all political disputes between states ending up on their docket.

Benjamin Ginsberg, a longtime Republican election law expert and CNN contributor, told CNN on Wednesday that he didn't think the court "for an instant" will consider taking up the case.

The GOP "used to be a party for states' rights," Ginsberg said. "I can't imagine something that is less faithful to the principle of states' rights than a Texas attorney general trying to tell other states how to run their elections."

Sen. John Cornyn, the senior Texas Republican, told CNN that "I frankly struggle to understand the legal theory of it. Number one, why would a state, even such a great state as Texas, have a say-so on how other states administer their elections? We have a diffused and dispersed system and even though we might not like it, they may think it's unfair, those are decided at the state and local level and not at the national level."

What evidence do Trump and Republicans have?

The lawsuit includes several of the same claims that state and federal courts have rejected time and time again over the past month regarding alleged voter fraud and the legality of mail-in balloting.

"Using the Covid-19 pandemic as a justification," Paxton wrote, officials in the battleground states "usurped their legislatures' authority and unconstitutionally revised their state's election statutes." He said they had done so through "executive fiat." He pointed specifically to mail-in ballots, which he said were placed "in drop boxes" with "little or no chain of custody," which weakened signature verification and witness requirements, which he called "the strongest security measures protecting the integrity of the vote."

The President for weeks has pushed increasingly desperate appeals and baseless conspiracy theories about his second term being stolen.

"Our Country is deeply divided in ways that it arguably has not been seen since the election of 1860," Trump's motion to intervene states. "There is a high level of distrust between the opposing sides, compounded by the fact that, in the election just held, election officials in key swing states, for apparently partisan advantage, failed to conduct their state elections in compliance with state election law."

Who are Trump's new lawyers?

The President's campaign has been represented by former New York Mayor Rudy Giuliani and attorney Jenna Ellis. In the current motion, however, Trump is being represented by John Eastman.

Eastman is known for recently pushing a racist conspiracy theory -- that Trump himself later amplified -- claiming Vice President-elect Kamala Harris might not be eligible for the role because her parents were immigrants.

Trump has also asked GOP Sen. Ted Cruz of Texas -- the former solicitor general of the state -- to represent him at the Supreme Court in the unlikely event it hears oral arguments.

This story has been updated with developments Thursday.