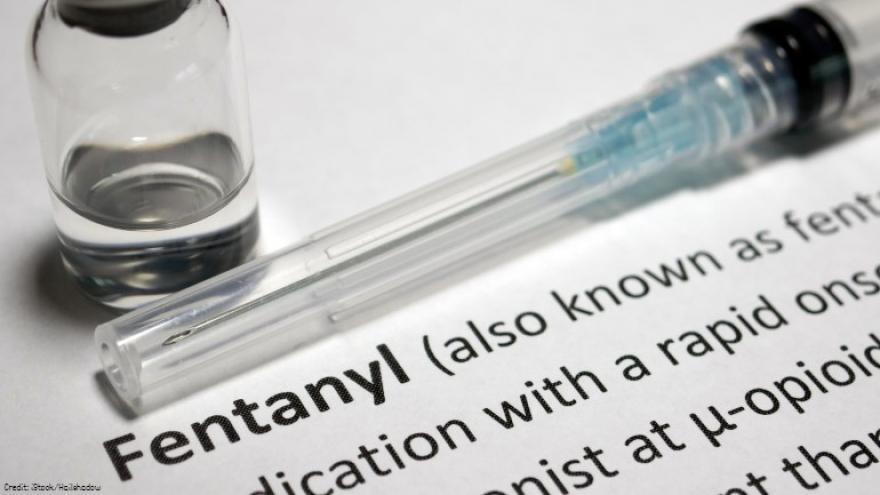 (CNN) -- Senate lawmakers reached a last-minute deal on Thursday to save a sweeping tool that has helped drug enforcers crack down on fentanyl as the synthetic opioid ravages communities across the country.

But the deal, which extends a ban on all substances chemically similar to fentanyl -- known as analogues -- still needs to be approved in the House. Progressives have raised concerns about it in the past, making its passage in the Democratic-controlled chamber uncertain.

The development in the Senate follows months of backroom wrangling between lawmakers and the Trump administration ahead of a February deadline. The legislation that emerged Thursday amounts to only a temporary fix, falling short of efforts to design a permanent solution that could win bipartisan support.

The Justice Department has said the ban saves lives by deterring producers of the deadly drug and making it easier for prosecutors to build cases against traffickers. In recent weeks, as an expiration for the original ban loomed, Attorney General William Barr launched a public campaign to pressure legislative action, underscoring the dire situation that drug enforcement officials predict if the tool is allowed to expire next month.

The top DOJ congressional liaison in a statement expressed satisfaction with the Senate bill and urged the House to move as well. He also said the department would continue efforts toward a long-term solution that addressed concerns raised by some Democrats.

"In the long term, we support legislation to permanently schedule fentanyl analogues as the dangerous drugs that they are while also making smart improvements to encourage medical research," said Stephen Boyd, the assistant attorney general for Legislative Affairs.

Advancing legislation to make the ban permanent proved problematic amid internal divisions between federal drug and health officials, and concerns from the medical research community and criminal justice advocates that have undermined Democrats' support on Capitol Hill, according to congressional aides.

A senior Democratic aide told CNN that the House Judiciary and Energy and Commerce committees, which have jurisdiction over the issue, were reviewing their options after the Senate legislation passed. Late Friday, the House Judiciary Committee announced they would hold a hearing on the topic later this month.

With a potency up to 50 times greater than heroin, fentanyl and its analogues have fueled the overdose crisis in recent years. In 2017, the synthetic opioid killed more than 28,400 people, accounting for the bulk of that year's record 72,000 drug overdose deaths, according to the National Institute on Drug Abuse.

Before the temporary ban on analogues, targeting the drug was like a game of whack-a-mole, drug enforcement officials have said. Fentanyl producers, largely black market chemists in China, would routinely skirt American narcotics controls by making slight alterations to the drug's molecular composition, creating unique versions of the drug that would flood the US through the mail and across the Mexican border.

The Drug Enforcement Administration in 2018 took the extraordinary step of designating all "fentanyl-like" substances as a class under Schedule I, putting them in the same top drug tier that includes heroin and ecstasy. The emergency order was temporary -- by statute it could only last for two years.

It had an immediate effect. In 2018, encounters of fentanyl analogues dropped significantly, and last year, only two strains were detected in the US, according to the Justice Department.

Last year, after months of diplomacy by the Trump administration, the Chinese government implemented its own ban on fentanyl analogues. But drug experts have warned that global fentanyl production has already shifted, with an increasing amount flowing from Mexican cartels.

Despite the ban's success in the US, multiple legislative efforts to extend or codify the emergency order ahead of next month's deadline had failed. A push to tuck a temporary extension into the year-end spending bill never materialized, and a compromise proposal prepared by the Trump administration has stalled before the Senate Judiciary Committee, even as the deputy attorney general and DEA chief lobbied for it in person.

Late last year, Senate Majority Leader Mitch McConnell fast-tracked a bill that would permanently build the analogue ban into the federal scheduling law, without any additional provisions, though it has not been voted on.

The bill passed unanimously in the Senate on Thursday will keep the ban in place for another 15 months. Sen. Dianne Feinstein, the top Democrat on the Senate Judiciary Committee and one of its co-sponsors, said it was a patch that allowed lawmakers "time to find a commonsense, bipartisan pathway to develop meaningful solutions to the overdose crisis."

Detractors of the ban maintained their opposition in the wake of the move Thursday. In a letter, a group of civil rights advocacy organizations, including the ACLU and the Drug Policy Alliance, criticized the extension for failing to address concerns that the scheduling order furthers the over-criminalization of drugs.

"We continue to have serious concerns that granting the Drug Enforcement Administration class-wide scheduling authority for fentanyl analogues will exacerbate already disturbing trends in federal drug prosecutions and incarceration levels," the groups wrote.

In addition to the criminal justice concerns, Democrats have also pointed to claims from the medical research community that the Schedule I designation hampers legitimate study into areas like overdose prevention science.

Researchers who want to experiment with Schedule I drugs face significant legal barriers, often delaying their work by months at a time.

"There's more of everything -- more security, more forms, more of everything. It's logistically more difficult," said Geoffrey Laredo, a former senior adviser at NIDA, a federal research institute under the Department of Health and Human Services.

Some scientists believe that derivatives of fentanyl, which has legal uses as a painkiller, could be valuable in cancer research, or in developing the next generation of opioid antidotes.

With overbroad scheduling that slows down researchers, "you don't know what you're preventing yourself from finding, because you're somewhat arbitrarily laying down the law and saying all this stuff that is in one way or another chemically similar, we're just going to ban it outright," Laredo said.

Those concerns became a point of friction over the summer between officials from NIDA and the DEA, according to congressional aides.

In a briefing with lawmakers, officials from the two agencies were at odds over how legislation would impact the research community, with the health officials disputing what they thought was the DEA's minimization of the potential harm, the aides said.

A group of senators on the Judiciary Committee later wrote to HHS Secretary Alex Azar saying they were "concerned" that DEA and DOJ had not "adequately consulted with public health agencies" in connection with the scheduling effort.

When the Trump administration eventually submitted its own proposal to make the analogue ban permanent to lawmakers on the Senate Judiciary Committee in September, it included a number of provisions aimed at satisfying the research community, including streamlined registration processes and paths off of Schedule I for certain strands of drugs that had been determined to not have a risk of abuse, according to a copy of the document obtained by CNN.

The proposal had been a top legislative priority for the Justice Department since then, and Deputy Attorney General Jeffrey Rosen was dispatched to Capitol Hill to lobby for it alongside DEA Acting Administrator Uttam Dhillon, as well as HHS and DEA scientists, according to a Justice Department official.

But the administration effort failed to gain traction. Instead, a bipartisan group of senators are continuing toward a separate compromise effort in the Judiciary Committee, congressional aides said.