Vaccination is important to protect against a spreading variant first identified in India, Fauci says 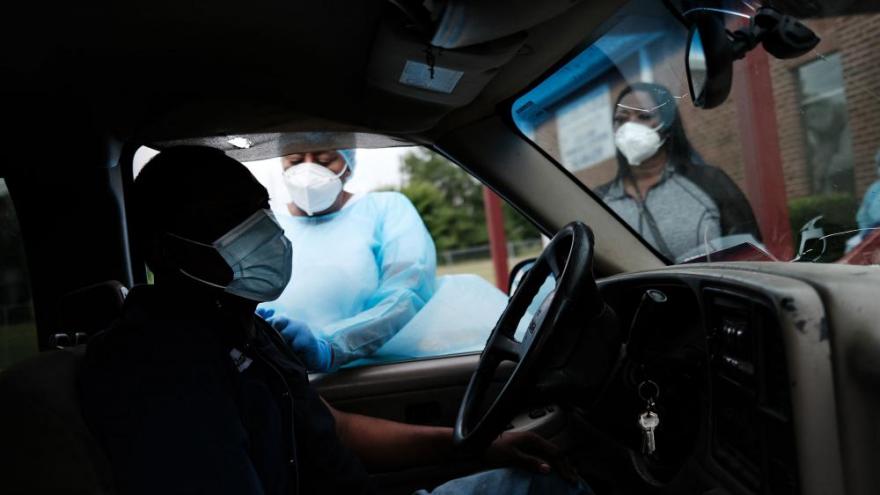 Medical workers with Delta Health Center prepare to vaccinate people at a pop-up COVID-19 vaccination clinic in Leland, Mississippi. Experts warn the country needs to redouble its efforts to get more people vaccinated by July 4.

(CNN) -- Dr. Anthony Fauci pleaded with the public Tuesday to get vaccinated, saying the Delta coronavirus variant -- the B.1.617.2 variant first identified in India -- accounts for more than 6% of the sequenced viruses in the United States.

The variant's spread and dominance in the United Kingdom, which was first hit hard by the Alpha variant -- B.1.1.7 -- could spell trouble for the United States if people don't get vaccinated, Fauci said in a White House Covid-19 briefing.

"We cannot let that happen in the United States," Fauci said, adding it's "such a powerful argument" to get vaccinated.

The Delta variant "may be associated with an increased disease severity, such as hospitalization risk, compared to (the Alpha variant, B.1.1.7)," Fauci said. The variant is susceptible to available two-dose vaccines from Pfizer and AstraZeneca, he said, but protection from these vaccines requires following a two-dose schedule.

"There is reduced vaccine effectiveness in the one dose," said Fauci, who is the National Institute of Allergy and Infectious Diseases director. "Three weeks after one dose, both vaccines, the (AstraZeneca) and the Pfizer/BioNTech, were only 33% effective against symptomatic disease from Delta."

There is not yet a booster vaccine trial underway specific to the Delta variant, but variant-specific boosters may be on the horizon, Fauci said.

A booster may focus on a specific variant, or the type a person was originally vaccinated against, he said.

Vaccination numbers have plummeted since April

Fauci's plea for Americans to get vaccinated against Covid-19 comes as vaccinations across the country have slowed, leaving unvaccinated Americans vulnerable to new variants and threatening the chances of reaching herd immunity.

Over the last week, the US averaged more than 1.07 million Covid-19 vaccine shots administered per day -- well below the peak seven-day average of 3.38 million shots per day reached on April 13, according to data from the Centers for Disease Control and Prevention.

Mississippi is the state with the lowest percentage of its population fully vaccinated -- 27.5% as of Monday, according to the CDC.

Alabama has the second-lowest percentage of fully vaccinated residents among all states -- 29.4% as of Monday, according to CDC data.

The state fell from 44,397 doses administered April 8 down to 1,465 doses on Saturday, according to the Alabama Department of Public Health's Covid-19 dashboard.

Arkansas, Louisiana and Tennessee and Wyoming also had less than 33% of their populations fully vaccinated as of Monday.

"I understand that in the short run we may get away with it, having slow vaccination rates," said Dr. Ashish Jha, dean of the Brown University School of Public Health.

"But those people really are vulnerable -- once we have more variants circulating in the United States -- to get reinfected and potentially get very sick."

Even those who've already had coronavirus should get vaccinated because research shows immunity achieved through vaccination is better than immunity through previous infection, Fauci said.

"We need to get vaccinated because vaccines are highly efficacious. They are better than the traditional response you get from natural infection," Fauci said last month.

Lab research shows those who previously had Covid-19 and received two doses of an mRNA vaccine "had interesting, increased protection against the variants of concern," he said.

And those relying on their immunity from previous infection need to understand the danger of new variants, Jha said.

"This is a bit of a misunderstanding that unfortunately a lot of people have ... this idea that if you've been infected that you have natural immunity that you don't need to get vaccinated," Jha said.

"There is no doubt about it in my mind that a vaccine-induced immunity is much more durable and is going to hold up much better against the variants."

Right now, the three vaccines used in the US work well against known variants of concern. But as coronavirus keeps spreading and mutating among unvaccinated people, "there may be future variants for which we are not so lucky," said emergency physician Dr. Megan Ranney, director of the Brown-Lifespan Center for Digital Health.

While the Moderna, Pfizer/BioNTech and Johnson & Johnson vaccines are highly effective at preventing severe Covid-19, they're not perfect at preventing infection.

But even those who get infected down the road after getting vaccinated will likely be less miserable than if they hadn't gotten vaccinated at all.

CDC data published research Monday showing those who had rare "breakthrough" infections after one or two doses of vaccine had 40% less virus in their bodies and were 58% less likely to have a fever.

They also spent two fewer days in bed than unvaccinated Covid-19 patients, according to the study.

"The only way to be protected is to be fully vaccinated," Jha said.

For those taking the Pfizer/BioNTech or Moderna vaccines, "This is why everybody needs a second dose."

Moderna anticipates it will have data on the Covid-19 vaccine for children as young as 5 in September or October.

"I think it's going to be early fall just because we have to go down in age very slowly and carefully," Moderna CEO Stéphane Bancel said at an event Monday hosted on the social media platform Clubhouse.

Bancel said the process will take time as it determines the appropriate dosages for small children. "We anticipate data available in the September/October time frame," he said.

The US added more than 16,000 new Covid-19 cases in children between May 27 and June 3, which is the lowest number of new child cases in a week in nearly a year, according to data published Monday by the American Academy of Pediatrics.

Correction: This story has been updated to clarify Moderna's data on the vaccine in younger children -- not the vaccine -- will likely be available by early fall, based on the company's statement after its CEO misspoke in response to a question. An earlier version also incorrectly stated the latest seven-day average of vaccine shots administered per day.