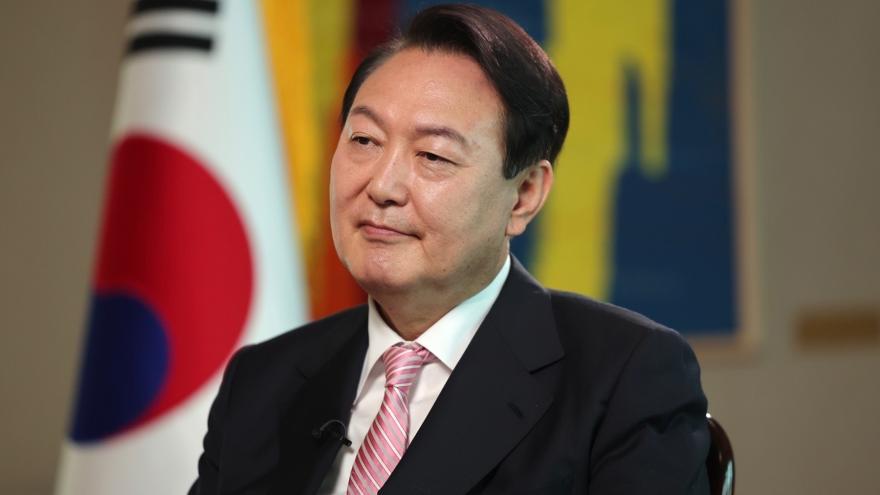 (CNN) -- The age of appeasing North Korea is over and any new talks between Seoul and Pyongyang must be initiated by North Korean leader Kim Jong Un, South Korea's new conservative President Yoon Suk Yeol said on Monday.

Speaking exclusively to CNN in his first media interview since taking office two weeks ago, Yoon said: "I think the ball is in Chairman Kim's court -- it is his choice to start a dialogue with us."

North Korea has launched 15 missile tests so far this year -- more than in the past two years combined -- and last month Kim vowed to "strengthen and develop" its nuclear forces at the "highest possible" speed.

From his new presidential office at the former defense building in Seoul, Yoon told CNN South Korea and its allies stand ready for any acts of North Korean provocation.

"Just to escape temporarily North Korean provocation or conflict is not something that we should do," he said, pointing at the previous liberal administration's conciliatory strategy. "This kind of approach over the past five years, has proven to be a failure."

Yoon, a former prosecutor and newcomer to politics, has consistently emphasized his tougher stance on North Korea and desire to strengthen the South's military -- a departure from predecessor Moon Jae-in, who had promoted dialogue and peaceful reconciliation.

Despite his stance, Yoon said Monday he didn't want North Korea to "collapse."

"What I want is shared and common prosperity on the Korean Peninsula," he said -- but added, "I do not believe that enhancing [North Korea's] nuclear capability is helpful and conducive to maintaining international peace."

The US, China and the Quad

Given North Korea's recent surge in missile testing and resumed activity at its underground nuclear test site, regional leaders were on edge over the weekend as Yoon met with US President Joe Biden in Seoul.

US officials had warned the North could be preparing for an underground nuclear or intercontinental ballistic missile test during Biden's visit -- his first Asia trip since taking office.

So far, that hasn't happened.

But the two men found common ground, Yoon said, showing CNN a gift received from Biden, a sign that read, "The buck stops here." The quote is often associated with former US President Harry S. Truman. "I don't know how (Biden) knew that I like this statement," Yoon said, placing it in the middle of his desk.

Throughout his campaign, Yoon emphasized the importance of South Korea's close security alliance with the US -- a push that was on full display after his meeting with Biden, whenthe US President praised their relationship as reaching "new heights."

After their meeting, the two leaders announced in a joint statement they would begin discussions on restarting and potentially expanding joint military drills that had been halted under Biden's predecessor -- a step likely to draw fury from North Korea.

On Monday, Yoon defended the move as purely defensive. Regular military training is "the basic duty of every military around the world to maintain their readiness," he said.

He added that in the case of an attack, the US would provide assistance including missile defense and its "nuclear umbrella," the promise of protection from a nuclear-armed state to a non-nuclear ally.

However, he ruled out the possibility of "redeploying tactical nuclear weapons on the [Korean] Peninsula."

But South Korea could see its partnership with the US and other regional players expand in other ways.

Yoon said it was in South Korea's "national interest" to join Biden's Indo-Pacific Economic Framework, a newly-unveiled economic plan for like-minded democracies in the region that is widely seen as a counter to China's sway.

He added that South Korea is also considering joining several working groups of the "Quad," or Quadilateral Security Dialogue -- an informal group made up of the US, Australia, India and Japan -- to collaborate in areas including vaccines, climate change and emerging technology. However, he stopped short of saying the South would seek official Quad membership, saying it was something they would "continue to consider."

The Quad has become more active in recent years as concerns growabout China's territorial claims in the region, with all four leaders set to hold an in-person summit in Tokyo on Tuesday. Beijing has condemned the bloc as an anti-China "clique" emblematic of a "poisonous" Cold War mentality.

For years, South Korea hastried to balance its US alliance with growing economic ties with China -- but Seoul's relations with Beijing have become strained in recent years.

Throughout his campaign, Yoon took a cooler tone than his predecessor toward China, portraying the country as an economic rival.

When asked about the risk of provoking Beijing's fury by forging closer ties with the US, Yoon brushed off the threat of economic retaliation.

"Even if we strengthen our alliances with the United States in security and technology, it does not mean that we think our economic cooperation with China is unimportant," he said. Besides, he added, both South Korea and China depend on their mutual cooperation -- "so I do not believe it is reasonable for China to be overly sensitive about this matter."