Exclusive: Military leader of Syrian Kurds tells US 'you are leaving us to be slaughtered' 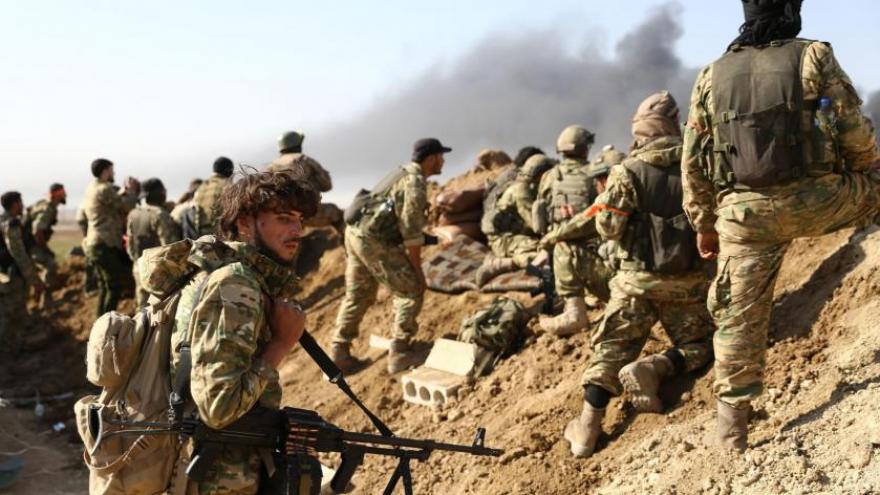 Turkish-backed Syrian rebels and Turkish soldiers watch as smoke billows from the border town of Ras al-Ain on October 12, 2019, as Turkey and it's allies continued their assault on Kurdish-held border towns in northeastern Syria.

(CNN) -- The commander of the Kurdish-led Syrian Democratic Forces told a senior US diplomat, "You are leaving us to be slaughtered," demanding to know whether the US is going to do anything to protect Syrian Kurds as Turkey continues its military operation targeting America's Kurdish allies in Syria.

"You have given up on us. You are leaving us to be slaughtered," Gen. Mazloum Kobani Abdi told the Deputy Special Envoy to the Global Coalition to Defeat ISIS, William Roebuck, in a meeting Thursday, according to an internal US government readout that has been obtained exclusively by CNN.

"You are not willing to protect the people, but you do not want another force to come and protect us. You have sold us. This is immoral," Mazloum added.

He insisted the US either help stop the Turkish attack or allow the Syrian Democratic Forces to strike a deal with the Assad regime in Damascus and their Russian backers, allowing Russian warplanes to enforce a no-fly zone over northeast Syria, thereby denying Turkey the ability to carry out airstrikes. The US does not want the Kurds turning to the Russians, administration officials say.

"I need to know if you are capable of protecting my people, of stopping these bombs falling on us or not. I need to know, because if you're not, I need to make a deal with Russia and the regime now and invite their planes to protect this region," Mazloum said.

Turkey launched its long-threatened incursion into Syria after President Donald Trump ordered a small contingent of about 50 US troops to be pulled back from the border area amid a belief that a Turkish incursion was imminent. Before that, as a confidence building measure with Turkey, the US convinced Kurds to dismantle their defensive fortifications along the border and pull their fighters back. The US said Turkey had agreed to the arrangement which sought to prevent unilateral Turkish military action.

Senior members of the Trump administration have insisted Turkey would have invaded regardless of whether US troops had remained and that the US has not deserted the Syrian Kurds, however the US government has not taken action yet to stop the Turkish incursion.

Secretary of Defense Mark Esper said Friday the US is not abandoning its Kurdish allies, although he made it clear the US military will not intervene in the fight.

"We are not abandoning our Kurdish partner forces and US troops remain with them in other parts of Syria," Esper told reporters at the Pentagon.

"We remain in close coordination with the Syrian Democratic Forces who helped us destroy the physical caliphate of ISIS, but I will not place American service members in the middle of a longstanding conflict between the Turks and the Kurds, this is not why we are in Syria," Esper said.

In an interview with The Tennessean on Friday, Secretary of State Mike Pompeo said the Trump administration "has been incredibly supportive of the Kurds" and that they had been good partners to the US. "I am very confident this administration will continue to support these people who have been good friends of the United States of America," he said.

Trump signed an executive order Friday giving the Treasury Department "very significant new sanctions authorities" against Turkey over its actions in Syria, but the US doesn't have any immediate plans to use them, Treasury Secretary Stephen Mnuchin said.

Trump, who has a well-established affinity for authoritarian leaders, invited Turkish President Recep Tayyip Erdogan to the White House in November.

Mazloum told Roebuck Thursday that "I've been holding myself for two days from going to the press and saying that America abandoned us and that I would like you to get out of our areas now so that I can invite Russian and regime planes to take over this airspace. Either you stop this bombing on our people now or move aside so we can let in the Russians."

Roebuck told Mazloum "not to take any immediate decisions," saying he would communicate the Kurdish leaders' messages to the State Department, and saying the US was working to stop Turkey's offensive and broker a ceasefire.

CNN has reached out to the State Department and White House on Saturday for comment.

Asked what message the US was communicating to the Kurdish-led SDF, the Chairman of the Joint chiefs of Staff, Gen. Mark Milley, said Friday that "we're encouraging them not to over-react at this point, and to try to tamp things down in order to allow some sort of diplomatic resolution to some of this."

Several US military and defense officials who have spoken to CNN expressed dismay over how the Trump administration has handled the situation.

One US official said it is well known that some senior US military officials are livid at how the Kurds have been treated.

Another senior US defense official told CNN, "We are just watching the second largest Army in NATO attack one of our best counter-terrorism partners."

A US official familiar with the situation in Syria tells CNN there is growing concern that Turkey's operation in Syria has grown in ambition and that Ankara seeks to control an area stretching from the Iraq border all the way to areas in northwest Syria already under Turkish control -- an area inhabited mostly by Kurds and other minorities. Turkish officials had previously communicated to the US that the scope of the operation was narrower, focusing in the area where the now defunct US-Turkish safe zone was to be located.

The official said Friday's artillery strikes near US troops around Kobani are evidence Turkey is operating beyond the areas it had indicated to the US.