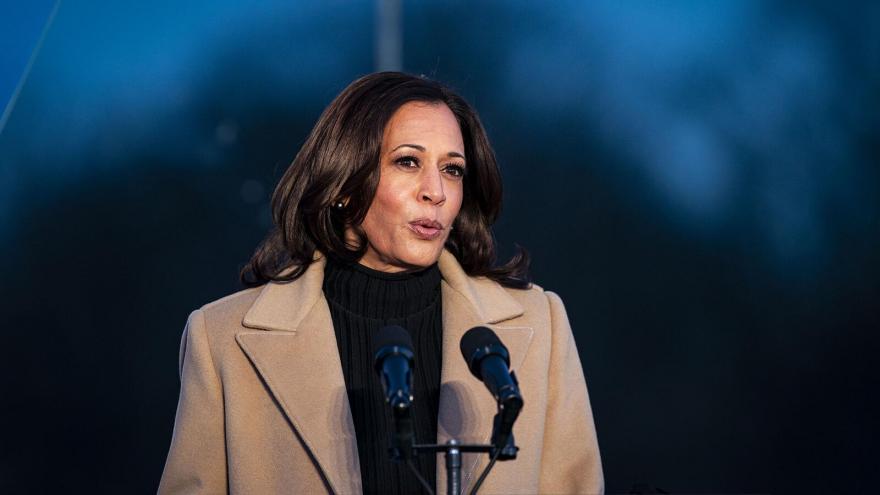 Vice President Kamala Harris, seen here in Washington, D.C., on January 19, 2021, drove within several yards of a pipe bomb at DNC headquarters during the Capitol riot.

(CNN) -- Then-Vice President-elect Kamala Harris drove within several yards of a pipe bomb lying next to a bench outside the Democratic National Committee headquarters on January 6, 2021, and remained inside the DNC for nearly two hours before the bomb was discovered, according to multiple law enforcement officials familiar with the situation.

Details about Harris' proximity to the pipe bomb and the extended period she remained inside the DNC have not been previously reported. The revelations further expose a security lapse on January 6 as law enforcement tried to respond to multiple major events, protect highly visible politicians, and fend off tens of thousands of riotous protesters that had flooded into Washington and attacked the US Capitol.

Multiple sources now tell CNN Harris pulled into DNC headquarters in Washington at around 11:30 a.m. ET with her motorcade through the garage leading to the parking deck near where law enforcement discovered the pipe bomb.

Harris' whereabouts and movements on January 6, 2021, have been shrouded in uncertainty. Her presence at the DNC wasn't known until earlier this month, when few details became public about her evacuation from its headquarters minutes after a pipe bomb was discovered nearby.

A law enforcement source familiar with the event told CNN that the US Secret Service, which was responsible for Harris' protection that day, swept the interior of the building, the driveway, parking deck and entrances and exits prior to her arrival. The source said Harris was evacuated using an alternate route away from the bomb.

While Harris and then-President-elect Joe Biden had not yet been sworn in, they were afforded Secret Service protection after the election. The fact that Harris was so close to potential danger for that period of time raises additional questions about the security measures in place to protect her.

"In order to maintain operational security, the Secret Service does not discuss protective means and methods," a Secret Service spokesman told CNN in a statement.

The White House declined to comment. The vice president's office referred CNN to the Secret Service.

Aides to Harris previously declined to reveal her movements during the January 6 insurrection, citing security reasons. As violence ravaged the Capitol, an aide would only tell CNN she was "safe."

Harris first referenced the details of her day during remarks earlier this month, marking one year since the riot, saying she was inside the Capitol that morning for a classified Senate Intelligence Committee briefing before leaving.

"On that day, I was not only Vice President-elect, I was also a United States senator. And I was here at the Capitol that morning, at a classified hearing with fellow members of the Senate Intelligence Committee. Hours later, the gates of the Capitol were breached," Harris said.

"I had left. But my thoughts immediately turned not only to my colleagues, but to my staff, who had been forced to seek refuge in our office, converting filing cabinets into barricades."

On January 6, officers from several law enforcement agencies responded to the scene at the DNC and the Republican National Committee buildings. The buildings are less than a quarter mile apart and just blocks south of the Capitol. Further, the bombs were discovered around 12:45 and 1:07 p.m. ET, respectively, around the same time angry pro-Trump supporters descended on the Capitol.

Both devices were rigged to egg timers and contained an explosive powder. Though neither detonated, the Federal Bureau of Investigation has made clear the bombs were viable.

The bombs were safely neutralized at the scene by robots. The DNC bomb threat was cleared at 4:36 p.m. ET, according to the timeline obtained by CNN.

No one has been charged with planting the bombs, and the FBI continues to search for a suspect whom they have identified in multiple videos released in the last year.