Ex-MLB star Johnny Damon had 4 times legal limit after DUI arrest, during which he voiced support for Trump and Blue Lives Matter 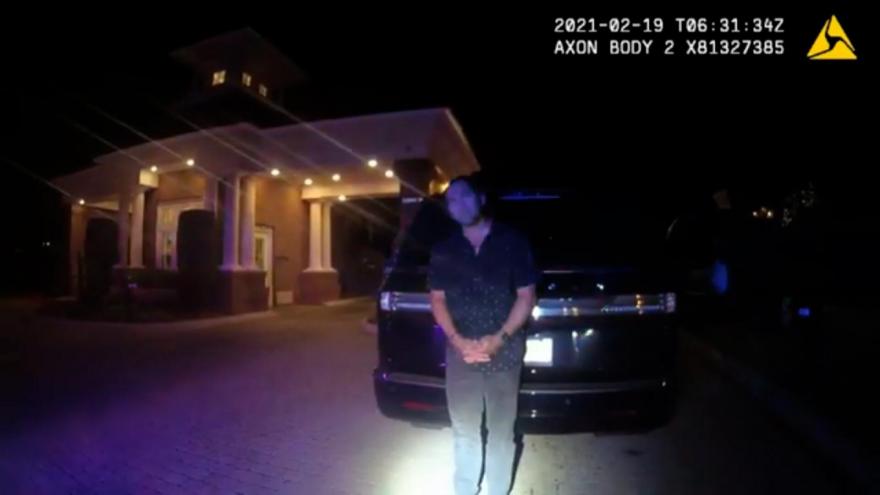 Former MLB player Johnny Damon is stopped for his DUI arrest on February 19. Damon mentioned his support for former President Donald Trump and the Blue Lives Matter movement in the bodycam video.

Damon was initially charged with one count of driving under the influence and one count of resisting an officer without violence, according to an arrest affidavit. Court documents show that he pleaded not guilty to the DUI charges, and the resisting charge was dropped.

According to the arrest affidavit, his breathalyzer test was at 0.30% two hours after police first stopped him, nearly four times the state's 0.08% threshold.

According to the affidavit, an officer said he stopped an SUV around 1:23 a.m. after seeing it drifting in the road and nearly striking a guardrail.

Video shows the moment the officer approached the vehicle. As the door opens, the officer can be heard saying to Damon multiple times, "shut your door" while approaching his SUV. The video shows Damon's wife, Michelle Mangan-Damon, climb out of the SUV and ask, "What's happening right now?"

According to the affidavit, the officer described Damon as "extremely unsteady on his feet and his speech was extremely slurred." The officer added he smelled alcohol coming from Damon.

The officer said that Mangan-Damon continued to disobey his commands to stay in the car, and at one point, Damon then stepped back over between the officer and his wife, the affidavit says.

The officer said he then grabbed Damon and escorted him to stand in front of the police car, ordering him to say there, the affidavit says.

Video shows Mangan-Damon walking toward the driver's side of the SUV when the officer grabbed her left wrist to stop her. Damon then intervened and got between the officer and the wife.

In the video, the officer can be heard saying "fighting one-two, actually" into his police radio.

The bodycam fell on the ground, showing both Damon and the officer. At one point, Damon can be heard saying a couple of times, "Blue lives matter," a reference to his support for police officers.

Two officers were eventually able to put Damon and his wife in handcuffs, according to the video and the affidavit.

"I know people are trying to target me because I'm a Trump supporter," Damon later said.

"I don't think that has anything to do with it," an officer responds.

"That's neither here nor there right now; that's not why I'm stopping you," the officer said.

Stuart Hyman, who is representing Damon and his wife, told CNN on Wednesday that the bodycam video doesn't show some of the allegations made by the police, including the alleged driving pattern that led to the stop.

"If you watch the video, then you saw that the driving pattern wasn't on the video that was being narrated and yet there was a camera in the car that could have recorded that," Hyman said.

Hyman added the incident was "not a textbook example of how a police officer should handle this type of situation," explaining the officer did not try to de-escalate at times when Mangan-Damon was not complying as well as when Damon tried to intervene.

Hyman told CNN Mangan-Damon has not been charged.

CNN has reached out to the Windermere PD for response to the attorney's statements.

Damon retired from Major League Baseball in 2012 after an 18-year career. He played on seven teams, mostly notably the Kansas City Royals, the Boston Red Sox and the New York Yankees.