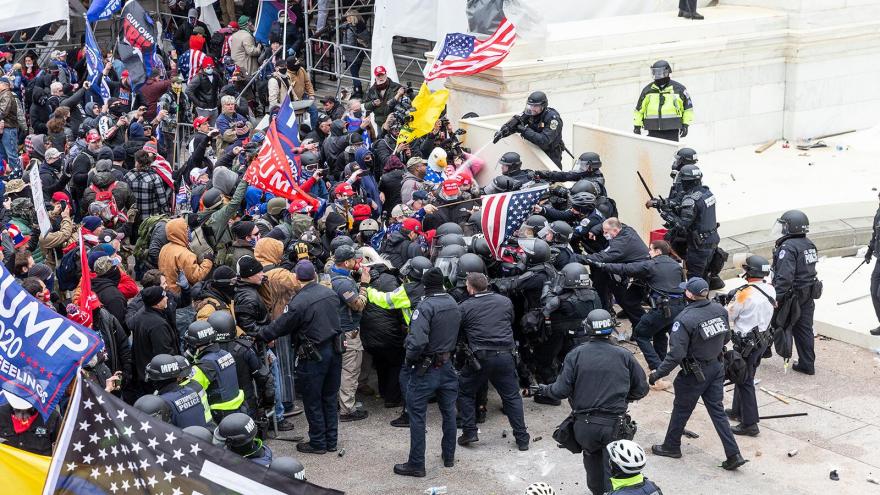 Pro-Trump protesters and police clash on top of the Capitol building on January 6. Rioters used metal bars and tear gas as well against the police.

(CNN) -- The unprecedented images spoke for themselves, but as prosecutors start filing criminal charges against pro-Trump rioters who attacked the US Capitol, new evidence is emerging of the horrifying scenes police officers faced while fighting for their lives that day.

Body camera footage from DC police, testimony from law enforcement officers and social media posts from rioters all chronicled in federal court documents are painting a fuller picture of the hand-to-hand combat between law enforcement and supporters of former President Donald Trump during the violent insurrection that he incited on January 6.

Officers were beaten with whatever the rioters had with them, according to court documents, including an American flag and a fire extinguisher. Scuffles near broken glass led to scrapes and bruises. Some rioters threw punches, while others hurled verbal insults at police.

Federal prosecutors have already charged dozens of people who allegedly participated in the riot, but the most serious charges have come against people involved in attacks against police. And the hundreds of pages of newly unsealed court documents are telling a horrifying story.

One Texas resident who is facing charges allegedly incited the crowd before entering the Capitol through a broken window. He shouted into a bullhorn, "If you have a weapon, you need to get your weapon," and "this is not a peaceful protest," according to court documents.

Prosecutors say a retired Pennsylvania firefighter, Robert Sanford, 55, threw a fire extinguisher at a group of police officers on the Capitol's western terrace. The fire extinguisher struck three officers in the head, including one who was later sent to the hospital for medical evaluation.

Sanford's lawyer did not respond to request for comment. He told the Associated Press that his client got "caught up in the mob mentality."

In another incident, Arkansas resident Peter Stager battered a DC officer with a flagpole that was holding an American flag, according to prosecutors. Court documents described a harrowing scene where the officer was dragged on the ground and surrounded by rioters.

Stager told an FBI tipster that he thought he was attacking a member of the violent left-wing group Antifa, even though photos from the scene clearly show the officer wearing a police vest. A lawyer for Stager did not respond to a request for comment.

Separately, another group of attackers surrounded one DC police officer and repeatedly tasered him in the neck, causing a heart attack. The officer, Michael Fanone, previously recalled to CNN that he begged the rioters to spare his life. "I just remember yelling out that I have kids," he said.

CNN previously reported that many US Capitol Police officers felt betrayed by their leadership, with officers left in previous positions throughout the attack, woefully unprepared and vastly outnumbered by the pro-Trump mob. Officers told CNN that they heard colleagues pleading for help, both for specific emergencies unfolding and for a big-picture plan to re-take the Capitol.

Some participants in the riot were armed with bear spray and other weapons. Others simply meandered around the building and gawked at statues. But for the first time since the War of 1812, federal forces inside the Capitol found themselves engaged in hand-to-hand combat.

One defendant, Mark Leffingwell of Seattle, was allegedly involved in a fistfight with police.

"Leffingwell attempted to push past me and other officers," US Capitol Police Officer Daniel Amendola wrote in a sworn affidavit one day after the insurrection. "When he was deterred from advancing further into the building, Leffingwell punched me repeatedly with a closed fist."

A lawyer for Leffingwell did not respond to a request for comment.

Some scuffles got out of hand. While one officer tried to block rioters from entering the Capitol through a broken window, he fell to the ground, which was "covered in shaards of glass," according to charging documents against a father and son that came to DC from Delaware.

Another rioter warned police inside the Capitol that they should stand down if they didn't want to get hurt by the mob of Trump supporters that was approaching, according to court papers.

Bodycam footage included in one criminal complaint showed the perspective of the police officers who were swarmed by dozens of rioters. According to the court documents, some of the rioters chanted "f--- the police," even though many carried "thin blue line" flags, which are associated with groups that typically argue that law enforcement is unfairly attacked by liberals.

One Black police officer previously told CNN that "there was a lot of racism" coming from the pro-Trump rioters, and that he was called racial slurs and epithets by some of the attackers