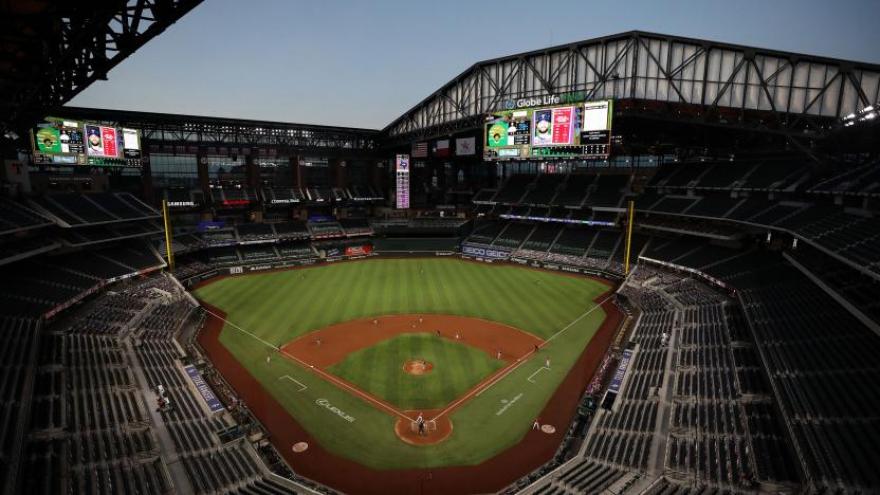 The Dodgers and Rays will be strangers in a strange land (aka Arlington, Texas).

(CNN) -- It is time for the World Series, and it's going to be a weird one! A shortened schedule, unfamiliar ballparks, crowds of permanently-smiling cardboard cutouts -- like everything else that's happened in this 500-year-long year, there was almost nothing about this baseball season that was normal.

But, like the tides and the phases of the moon, the World Series has come again on its cosmic cycle. So why not pop it on? Close your eyes and let the sound of the electronically-enhanced, socially-distant crowd take you away to a simpler time. Here's everything you need to know to have the best World Series experience you can.

Who is playing in the World Series?

The Los Angeles Dodgers and the Tampa Bay Rays will meet this year. Were they not enemies, perhaps they would be soulmates: Both teams hail from cities that have already celebrated championships this year (LA won the NBA Championship, Tampa Bay the Stanley Cup), they both have three words in their names, they both had the best records in their respective leagues and they both wear dashing combinations of blue and white.

Where is the World Series being played?

The whole series will take place at the Texas Rangers' new Globe Life Field in Arlington. Usually the teams would switch off between their home fields, but since this is The Strange Year (for everything, not just sports), the MLB playoffs have been operating in a kind of modified bubble in Texas.

When is the World Series?

While both teams ended up playing a grueling seven-games-in-seven-days series in the last round of the playoffs, the World Series schedule is a little bit more relaxed (and, bonus, no cross-country travel!). The best-of-seven schedule is as follows:

How can I watch the World Series?

All of the games will be broadcast on FOX. Alternately, you could just sit nervously for about three hours, punctuating the time with very quick, intense moments of sadness and joy. Baseball is definitely 50% waiting for something to happen, 25% things happening, and 25% wishing the things that just happened didn't happen.

Are there going to be actual fans in the stands?

Yes! When the MLB started the season four months late in July because of the pandemic, there were no fans allowed. Instead, most teams opted for cardboard cutouts. Some teams let their fans pay to get their faces on these cutouts. That's cute in theory, but glancing up into a throng of flat, unblinking eyes and frozen rictuses had to be a bit unnerving for the players. Plus, you couldn't help but feel a little bad for the cutouts that got obliterated by foul balls.

Fox also peppered early broadcasts with "augmented reality" fans in the stands. We don't talk about those times.

Anyway, they've been letting fans into playoff games, so expect to see some smattering of people pulling their Rays and Dodgers masks to the side to casually wolf down a hot dog.

Tell me more about these teams! Who should I root for?

If you enjoy suffering, root for the Los Angeles Dodgers. This will be their third time in the World Series in four years, and they haven't won the whole thing since 1988, before most of their players were even born. To say they are due would be an understatement.

To add to their suffering, Dodgers fans have to live with the knowledge that the team that beat them in the 2017 World Series, the Houston Astros, were cheating that season. That's sad! The Dodgers are too good to be this sad.

If you enjoy underdogs, then root for the Tampa Bay Rays. Yes, they had the best record in the American League. Yes, they are a very good team. But they are a) not the Dodgers and b) in the World Series for only the second time in franchise history. They've also never won, so don't put it past fate to deny the 130-year-old Dodgers franchise another World Series victory and hand it to a team that's only been around since 1998.

"Team" is such an impersonal word. Tell me about the men, the souls behind the logos.

If you want to know some guys, you are in luck! There are a lot of guys on these teams who are eminently knowable.

On the Los Angeles Dodgers:

Clayton Kershaw: He's one of the best pitchers to ever throw a baseball, and one of the richest, too. But despite his millions of dollars, three Cy Young Awards (the big daddy pitching award), and definite future in the Hall of Fame, he does not have a World Series title. That's no way to live.

Mookie Betts: It's pronounced like "spooky," not "Wookie." This young star was acquired by the Dodgers in a huge trade at the beginning of the year with the Boston Red Sox, the team that beat them in the 2018 World Series. In this short, strange MLB season, Betts has definitely delivered. Expect to see lots of big hits from him, and a lot of great catches when he's in center field. Extremely fun fact: Betts is also a professional bowler, and rolled a perfect game at the 2017 PBA World Series of bowling.

On the Tampa Bay Rays:

Randy Arozarena: This Cuban phenom has been the breakout star of the playoffs, and he has an excellent name. It just rolls off the tongue! (It's pronounced exactly like "a rose arena," which isn't at all confusing when you're listening to baseball broadcasts out of context, don't know who Arozarena is, and can't figure out what they're saying.) The Rays are a cool team to watch because they don't have a lot of flashy names or big-ticket players, but they're still good -- obviously, seeing as they're in the World Series. But if they ever DO decide to become a big baller, star-studded team, Arozarena would be a good start.

Kevin Kiermaier: This guy is the veteran Ray, which is a hilarious thing to say about a 30-year-old person. He's a three-time Gold Glove award winner, which, for the non-baseball-literate, means he's very good at catching baseballs that should definitely not be caught.

Wait. Has baseball really been going on long enough for a World Series to happen?

The baseball season actually started 500 years ago, back in February. Everyone was bright-eyed and innocent, soaking in the sun at spring training and dreaming of another long, languid summer at the ballpark.

Then it all went to hell in March.

The whole season was postponed, then picked up in July for an ultra-short 60-game run. Now, you may be thinking, 60 games is a lot! It's almost an entire basketball season, and several football seasons. But baseball fans love punishment, and a typical season is 162 games. So 60 games, in comparison, is barely enough time to really get the full flavor of it. But, regardless of Covid uncertainty and all of the other bizarre things this truncated season has wrought, the two best teams are at the top. And while some people may say this year's World Series win will have an asterisk next to it, you know what can never be argued with?