Every year she turns giant pumpkins into celebs. This year, she chose Rudy Giuliani and the Joker 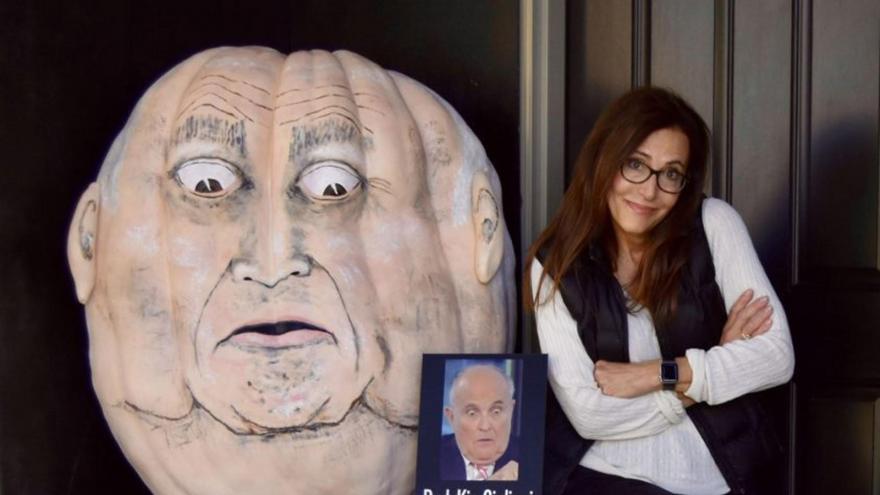 Each year, Jeanette Paras selects a person in the news or pop culture and paints a giant pumpkin caricature. "Well this year Rudy Giuliani has been in the news a lot lately and he certainly is monopolizing the news,"the pumpkin creator said.

(CNN) -- It's enough to raise eyebrows and pop your eyes out.

Yes, the unlikely duo of Rudy Giuliani and the Joker have descended upon one Ohio porch in the form of giant pumpkins.

President Trump's personal attorney in pumpkin caricature weighs in at 277 pounds, while his associate punches in at 108 pounds of terror. Jeanette Paras is the creator of these painted caricatures, who she's dubbed RudyKin Giuliani and the Joker (sorry, no pumpkin puns here).

"Every year I look at those in the news and who or what is the hot topic of the conversation and who does so cutting across culture sports, entertainment and even more," Paras told CNN. "Well this year Rudy Giuliani has been in the news a lot lately and he certainly is monopolizing the news."

Paras has been turning giant pumpkins into caricatures of celebrities and other noteworthy people since 1988. She carefully thinks through who is making headlines that year before creating the works of art that sit on her porch in Dublin, Ohio.

Her recent guests have included politicians in pumpkin form, like Donald Trumpkin, Hillary Clintkin and Vladimir Putkin. Pumpkins in previous years include Miley Cyrus as a wrecking ball, Phil Robertson from "Duck Dynasty," Lady Gaga and many more.

"Rudy Giuliani has gone from being America's mayor after 911 to monopolizing today's headlines. I am letting my pumpkin public answer which one is joking, the RudyKin or the Joker," Paras said.

Meanwhile, the Joker is pulling his own weight to be among Paras' collection of pumpkins.

"Joker" reached a summit in pop culture on Friday when the movie became the top-grossing R-rated film of all time in the global box office.

Settling on who to "pumpkin-ize," as Paras has called it for years, was especially difficult this year.

"It's hard because there's so much going on with the hot topics today and the news just changes daily," Paras said. "I really didn't make up my mind until about a week before I started painting and then even then was it a little fluid."

When asked if the Giuliani and Joker pumpkins are meant to be a pair, Paras coyly asked what this reporter thought. A sign on her front lawn that points to the display reads, "You're joking, right?"

"I'm letting the pumpkin public decide who it refers to," she said. "Is Giuliani joking with what he's doing right now or is the Joker, or actually are they both joking?"

"I don't create the news, but I do pumpkin-ize it," she added with a laugh.

This year's pumpkins took 12 hours to paint, as seen in this time-lapse video from October 21.

Paras painstakingly matches details from a photo of the real person. Creating Giuliani's wide-eyed look and finessing the Joker's hair were the hardest parts, she said. It took a lot of shopping and three wigs to achieve the Joker's signature hairstyle.

"You don't just slap hair on a giant pumpkin, you have to strategically place it," Paras said.

Before the painting began, the pumpkin scouting was key. Local pumpkin growers often give their orange treasures to Paras as gifts for her annual tradition.

The pumpkins often last until Christmas if the Ohio weather stays cool and they survive longer because she doesn't carve them, Paras said. In previous years she has morphed her pumpkin creations with a "holiday makeover," like when Donald Trumpkin became the character from the 2003 movie "Elf."

After 31 years of turning people into pumpkins, Paras isn't stopping anytime soon. She just enjoys it too much, she said.

"I crack myself up with it," Paras said. "I do it because it's funny, it's fun, I enjoy it. A lot of other people enjoy it and look forward to it."