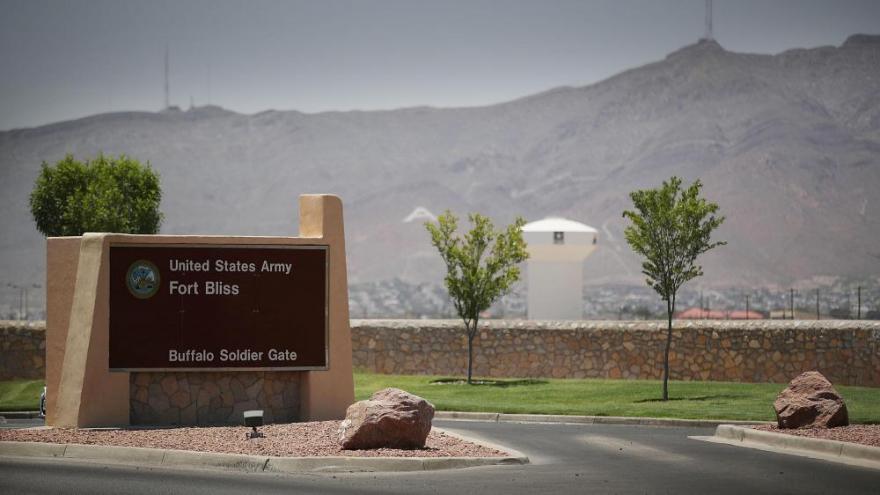 An entrance to Fort Bliss is shown on June 25, 2018, in Fort Bliss, Texas. Migrant children who crossed the US-Mexico border alone are still spending prolonged time in temporary government facilities, raising concerns among attorneys, who say the conditions are inadequate for kids, according to a court filing on June 21.

(CNN) -- Migrant children who crossed the US-Mexico border alone are still spending prolonged time in temporary government facilities, raising concerns among attorneys, who say the conditions are inadequate for kids, according to a court filing Monday.

Over the spring, the Biden administration scrambled to get a record number of migrant children out of Border Patrol holding facilities, which are more like jails, and into temporary sites, which attorneys conceded are better equipped for kids but still have shortfalls. In more than a dozen declarations filed Monday, children reported varying conditions across the sites, from receiving undercooked food to limited access to showers.

A team of attorneys was given access to speak with the children because they're monitoring government compliance with the Flores settlement, a 1997 agreement that governs conditions under which US officials can detain immigrant children. They have conducted site visits and interviewed children at the majority of the pop-up sites, which were initially intended for short stays.

"Plaintiffs are increasingly concerned about the prolonged detention of thousands of children in unlicensed, standardless [emergency intake site] facilities, which are, at best, suitable for short-term emergency care and are inherently incapable of caring for children as the Settlement requires," the filing reads.

As of Sunday, there were 14,467 children in the custody of the Health and Human Services Department, many of whom were staying at emergency intake sites.

"We welcome Flores Counsel into emergency intake facilities and appreciate their feedback. There is an around-the-clock effort to quickly address any situations in our facilities and improve the services provided to children under our care," HHS told CNN in a statement Tuesday, adding that fewer than 8,000 children are currently in emergency intake sites, down from a high of around 14,500 at the end of April.

Still, hundreds of children have spent 60 days or longer in emergency intake sites, Monday's filing says. The delays sparked confusion among children, who reported feeling desperate to reunite with family in the US.

"Every day, I feel really sad. I keep seeing other kids leave," a 16-year-old from Guatemala said in a declaration filed Monday. The teen has been at an emergency intake site in Pecos, Texas, for 62 days, waiting to reunite with an uncle in Maryland.

"There are some other kids who have been here for about the same time as me, and there is just a lot of sadness among us," the declaration reads.

HHS, which is charged with the care of unaccompanied migrant children, has a licensed bed capacity of around 13,500 equipped with a myriad of services, such as education and recreation, but given capacity constraints related to the coronavirus pandemic, the department has had to rely on temporary sites.

Generally, the pop-up facilities took the shape of emergency shelters, offering basic necessities but falling short of providing other services, like education and case management, to the hundreds of children housed at the sites. Conditions at emergency intake sites can vary -- and regularly change -- but in some cases, the rapid pace at which sites were set up contributed to their shortcomings.

CNN previously reported on a facility in Texas that attorneys likened to "warehousing" children. Health and Human Services Secretary Xavier Becerra told reporters in late May that the Fort Bliss site, like other emergency sites, allowed the administration to quickly move children out of Border Patrol facilities to a place that could better meet their needs, and he contradicted concerns about conditions in the facility.

But attorneys who visited Fort Bliss in early June found issues persist there. "For example, children at the Fort Bliss EIS sleep in rows of bunk cots in giant tents with hundreds of other children, enjoy no privacy, receive almost no structured education, have little to do during the day, and lack adequate mental health care to address children's severe anxiety and distress surrounding their prolonged detention," Monday's filing says.

Attorneys also found issues at other large sites, where hundreds of children live in close quarters.

A 17-year-old girl from Guatemala shared her experience sleeping in a tent with about 300 other girls at the Fort Bliss site. "We sleep on bunks. I used to be sleeping on the top but now I'm on the bottom because of my anxiety. I was afraid I was going to fall off. The bunks are pretty low. I can't sit up on my bunk without hitting my head," her declaration reads.

Children generally reported being permitted outdoor recreation for "as little as one hour daily," having little to no privacy, sleeping during the day to pass the time and limited calls with family, the filing says.

HHS said in Tuesday's statement that the department has addressed any concerns at the Fort Bliss facility and has expanded the services and programs provided to children, including offering exercise classes, as well as counseling and behavioral health.

In Houston, a site set up by the National Association of Christian Churches, which had been helping to shelter children, was abruptly closed shortly before attorneys were set to visit it, according to Neha Desai, immigration director at the National Center for Youth Law. They've since located more than a dozen girls who were at the site.

The girls described fainting spells, inadequate food or a lack of food, not enough clean clothes, and restrictions that barred them from using the restroom after 10 p.m, according to declarations.

"The food was horrible. There was chicken that was boiled and when we opened the chicken it was raw inside," reads a declaration from a 17-year-old Honduran girl.

"During the day and night, we were told that we had to stay on our beds and could only get up to go to the bathroom and to shower. We had to eat on our beds because there was no other place to eat," reads a declaration from a 17-year-old girl from El Salvador.

She also describes wearing the same clothes for 15 days and staff members directing the girls "to wear the same underwear and just turn it inside out, because there wasn't any laundry to clean our clothes."

"HHS is committed to ensuring the well being of children in our care. We proactively closed the Erie and Houston facilities because they didn't meet our standard of care and we are working tirelessly with contractors to ensure those standards are met at sites operating today," an HHS spokesperson previously told CNN in a statement, referring to the emergency site set up in Houston and another in Erie, Pennsylvania.

Another of the main challenges across pop-up sites is the lack of case management, usually baked into the already-established Office of Refugee Resettlement shelters. Case managers work with children to relocate them with sponsors, like parents or other relatives, in the United States while they continue their immigration proceedings.

While the administration has tried to expedite releases in some cases, attorneys found case management services are still lacking, leading children to stay in facilities for longer periods. Children reported a series of issues, like delays and interruptions in case management, not being able to request a meeting with a case manager, and having case managers removed or replaced without notice or explanation, the filing says.

Carlos Holguín, one of the attorneys who visited the intake sites, said in a filing that "the stressor children most frequently reported at Fort Bliss was not knowing how long they would remain separated from loved ones."

"The children I spoke to appeared visibly distressed when recounting how they felt seeing more and more of the children with whom they had arrived at Fort Bliss released, leaving them to wonder whether they had simply fallen through the cracks and been forgotten," he said in a declaration.

This story has been updated with a statement Tuesday from the Health and Human Services Department.