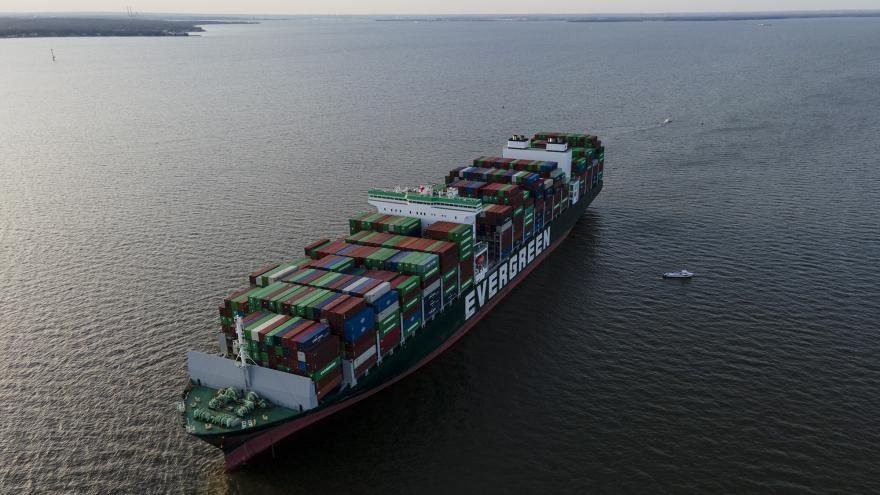 (CNN) -- The U.S. Coast Guard is working on a plan to safely refloat a 1,095-foot container ship operated by Evergreen Marine Corp. that grounded in the Chesapeake Bay Sunday night.

This comes nearly a year after the container ship Ever Given, also operated by Evergreen Marine, became grounded in the Suez Canal, clogging up one of the world's most vital trade arteries for nearly a week and disrupting global supply chains.

The container ship Ever Forward is reportedly carrying general cargo and was on its way to Norfolk, Virginia, when it grounded leaving Baltimore on Sunday. According to the Coast Guard, the ship is not currently obstructing Chesapeake Bay's navigational channel.

The USCG is regularly monitoring the vessel for "potential pollution," according to a release from U.S. Coast Guard 5th District Public Affairs.

Crew on-board the Ever Forward, have been instructed to monitor for potential pollution and report any noticeable change in stability, draft readings, vessel position, or signs of an oil discharge, while the Coast Guard is enforcing a 500-yard safety zone around the vessel to ensure the safety of the marine environment during ongoing salvage operations, the release said.

The Coast Guard and Maryland Department of the Environment are coordinating the refloating of the container ship and investigating how it became grounded, the Coast Guard said.

CNN has reached out to vessel operator Evergreen Marine Corp. for comment.