Ever Given ship partially freed in the Suez Canal, authority confirms 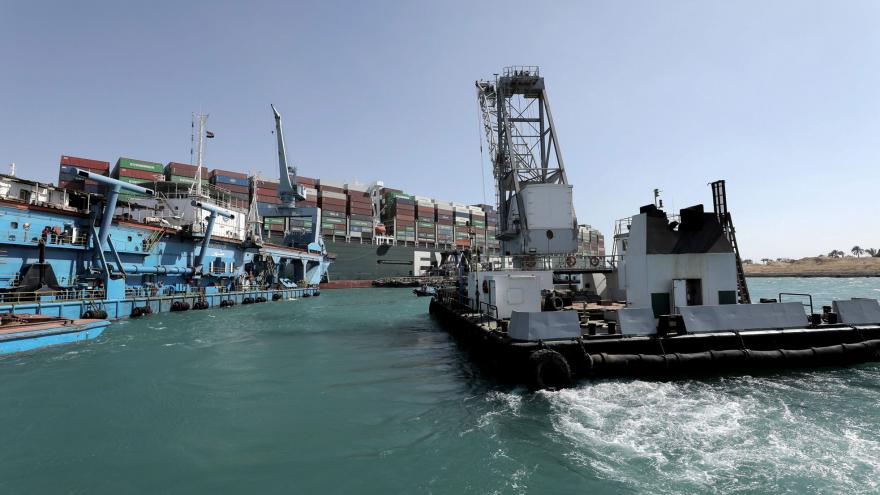 (CNN) -- The Ever Given container ship has been partially dislodged after blocking the Suez Canal for almost a week, authorities say, but efforts to fully refloat it are likely to continue for some time.

There were promising signs early Monday when the rear of the vessel was freed from one of the canal's banks, but the boss of the Dutch company working on the operation says its bow is still stuck "rock solid."

Egyptian officials struck a more optimistic note, saying that crews plan to refloat the vessel later Monday. But the shipping crisis that has dominated headlines and captured the world's attention for a week appears destined to continue.

Peter Berdowski, CEO of Boskalis, whose sister company SMIT salvage is working to free the ship, said the vessel had been rotated about 20 degrees. "That is actually the easiest part," he told Dutch radio on Monday morning. Moving the bow away from the canal bank, where it remains stuck in sandy clay, will be more difficult, he added.

The operation to free the rest of the ship will resume when the water level rises in the late morning, authorities said in a statement. If the tugboats are unable to wrest the ship free, Berdowski said that they would try to direct water underneath the bow using dredging equipment.

"The container ship began to float successfully after responding to the pulling maneuvers," said Osama Rabie, head of the Suez Canal Authority (SCA), in a phone interview with state TV. "Once the ship is withdrawn, we will resume navigation directly, and we will take it to the Bitter Lakes."

People at the canal began cheering as news of Monday's progress came in. "Thank God the ship has floated," one person can be heard saying in a video, as the surrounding boats blow their horns in celebration. "God is great. The ship has floated."

Mohab Mamish, the former head of the Suez Canal and Egyptian Presidential seaport adviser, told CNN Arabic that the canal is expected to be ready for passage by today.

The Ever Given, a 224,000-ton vessel almost as long as the Empire State Building is tall, ran aground in the Egyptian canal on March 23. Crews from Egypt and around the world have been working nonstop to try to refloat the ship, with the operation involving 10 tug boats, sand dredges and salvage companies.

Previous efforts have failed -- but this latest attempt is being executed during high tide where the water in the channel is at its highest.

The massive salvage effort has focused on dredging sand from below the front and rear of the ship, before pulling the ship with tugboats.

Rescue teams started digging deeper and closer to the ship on Sunday, with dredging reaching 18 meters (59 feet) at the front of the ship, the SCA said in a statement. Over 27,000 cubic meters (953,000 cubic feet) of sand has been removed so far, said Rabie.

The rescue operation has intensified in both urgency and international attention as each day ticked by. Ships from around the world, carrying vital fuel and cargo, were blocked from entering the canal on both sides, raising alarm over the impact on global supply chains.

The Suez Canal is one of the world's busiest and most important waterways, and lost an estimated $14 million every day in transit fees. Billions of dollars of cargo were backlogged on over 350 ships awaiting passage.

About 12% of the world trade volume passes through the Suez Canal, and more than 18,800 ships passed through the canal during 2020. That's an average of 51.5 ships per day.

Many of the ships that were blocked from entry this week carry sensitive products, including livestock destined for different countries in Europe and Asia. Activists and experts worried that if the Ever Given wasn't freed soon, livestock food and water could run out on the other vessels -- spelling death for potentially thousands of animals.

Other ships carried oil -- a critical resource for several countries in the region. Nearby Syria, already scarred by years of war, had to impose fuel rationing on Sunday to safeguard dwindling oil supplies after tankers were unable to make deliveries due to the blockage.

Syrian authorities said the ration order was necessary to "guarantee the continued supply of basic services to Syrians such as bakeries, hospitals, water stations, communication centers, and other vital institutions."

Numerous countries offered their assistance in the rescue operation, including the United States, China, Greece and the UAE.

After several days of unsuccessful efforts, some experts suggested it could be weeks before the Ever Given was freed -- and some ships, unwilling to wait, chose to divert their journey around Cape Horn to avoid the canal.

Rabie, the SCA head, added that the reasons behind the accident remain unclear.

"There are many factors or reasons, fast winds and the sandstorm could have been a reason but not the main reason -- it could have been a technical mistake or human error," he said. "There will be further investigations."