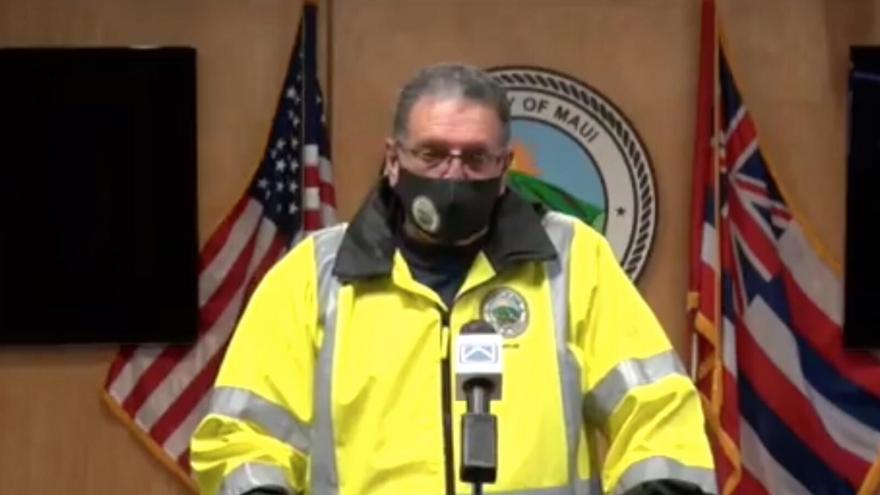 Water rushes down the street in the Maui, Hawaii, community called Haiku, on Monday. Carlos Garcia recorded the video and said he is about a mile away from Kaupakalua Dam, which is in danger of failure

(CNN) -- The mayor of Maui has asked some residents to evacuate and others to shelter in place due to flooding that has threatened to cause a dam failure and has already damaged or destroyed at least half a dozen homes.

The Maui Fire Department reported it received more than a dozen calls for help from residents who were trapped in their homes because of rising flood waters, according to an update from the County of Maui.

"The current weather situation has created very dangerous flooding situation throughout the County of Maui, especially in east Maui," Maui Mayor Mike Victorino said during a press conference Monday afternoon. "Ladies and gentlemen, this is a real flooding situation we have not seen in a long time," adding that some residents told him that this is the worst flooding they've seen in over 25 years.

Heavy rains caused the water in the Kaupakalua Dam in Haiku to crest early Monday, putting it in imminent danger of failure, officials said.

The dam was reported to have breached at 3:21 p.m. local time, according to a statement from the County of Maui.

Hawaii Emergency Management Agency ordered those downstream to evacuate and three shelters were opened for those in need.

The National Weather Service said that additional heavy rainfall could lead to a short-notice flash flood warning for areas downstream of the dam and advised residents to follow instructions provided by Maui emergency management officials.

The governor said he was ready to assist the area during evacuations.

""The state is standing by to support the County of Maui as residents and visitors downstream of the Kaupakulua Dam evacuate at this hour. Please stay out of the area until the danger has passed and continue to monitor local media for updates," Hawaii Gov. David Ige said in a statement.

All County of Maui parks were closed until further notice because of heavy rains and flooding, the Department of Parks and Recreation announced.

Carmen Gardner told CNN said she has lived in the area for 40 years and has never seen flooding this bad.

She recorded videos showing how quick and forceful the water has flooded the area She said she was safe above the Kaupakalua Dam.

"Winter of 88-89 was some flooding during a downpour but never anything close to this," she told CNN. "Kaupakalua Road looked like the Colorado River. It is below us, but there is a flash flood ongoing at the bottom (lower) edge of our property that appears to have already taken out one of the unpermitted structures they rented out."

Gardner said the rentals below her appeared to be "damaged heavily."

Ana Paula DeCarlo told CNN her family was safe although they were stuck at home due to the roadway washing out. She recorded video that showed water rushing over the roadway that used to have a small stream under it.

"Yes, it's like a bridge, small one over a stream," she said of the road. "It hasn't stopped raining one second. We are about 15 minutes away from the dam."

"This is our street right now. We can't go anywhere. The street disappeared, it's gone!," she posted on Instagram.