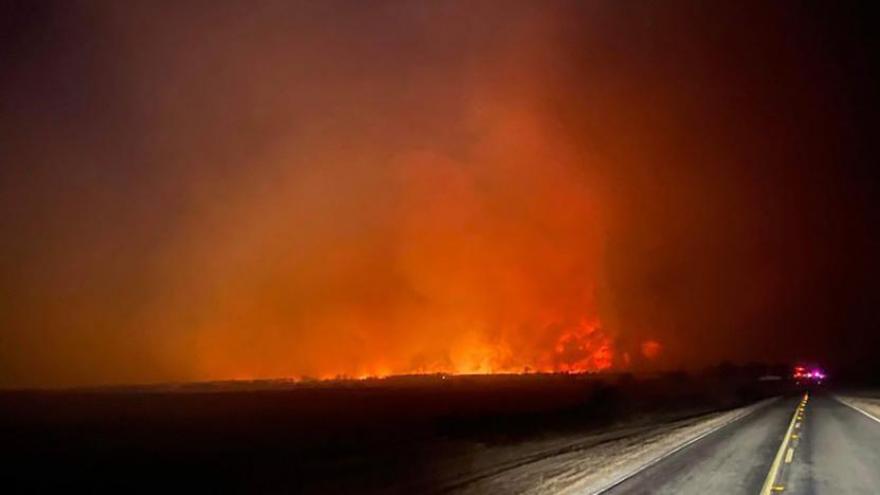 A rapidly growing fire in West Texas has charred more than 38,000 acres and remains 0% contained as of March 17.

Deputy Sgt. Barbara Fenley, 51, was assisting evacuation efforts in Carbon and was last heard from when she was on her way to check on an elderly person, the Eastland County Sheriff's Office said. But with deteriorating conditions and low visibility from the smoke, Fenley ran off the roadway and was killed by the flames, the office said.

"Sgt. Fenley gave her life in the service of others and loved her community," it added. Fenley is survived by her husband and three children, the sheriff's office said. "She will be deeply missed."

"Many of these are new starts so we won't have an accurate acreage. The largest active wildfire is the Eastland Complex in Eastland County and consists of four wildfires," O'Connor said.

Officials responded to 175 wildfires that burned through 94,840 acres throughout Texas in the past seven days, according to O'Connor.

Gov. Greg Abbott signed a disaster declaration Friday evening for 11 Texas counties, including Eastland, and said more counties may be added to the list as needed. Dozens of homes were lost in the flames and shelters were open for impacted residents, while authorities focused on containing the blazes, the governor said in a news conference.

The Eastland Complex fire, in the middle of the state, reached at least 54,015 acres by Sunday morning, according to the Texas A&M Forest Service. It was 30% contained by Sunday afternoon, the service said.

The complex is among multiple wildfires scorching areas across the state amid dry and windy conditions.

The Texas A&M Forest Service's forecast fire danger map for Sunday showed a "very high to extreme potential for a wildfire to ignite" and potential for "significant" fires in numerous counties.

"One message that I would like to exaggerate and express is that we are not out of danger yet for our high hazard fire risk," Eastland Fire Chief Joe Williamson said in a news conference Friday. "So we just ask that the community take sincere caution in your outdoor activities and practice fire safety."

At least 50 homes had been lost in the flames across three communities that were under evacuation orders a day earlier, Abbott said in a Friday evening news conference.

"Probably as we are able to better surveil damages here in the coming days we will find more than that," the governor said.

One family in Carbon found just ashes and rubble when they returned home. Debbie Copeland posted a video on Facebook sharing what she saw when she returned early Friday: nothing there but the home's sidewalk. Her family told CNN affiliate WFAA they had lived in the home for more than two decades.

A neighbor lost her home, too, the affiliate reported.

"We did lose a lot of Carbon, Texas," Eastland County Judge Rex Fields said in Friday's news conference. "It's devastating."

Structures in Carbon were "heavily impacted" Thursday afternoon when one of the four blazes -- the Kidd Fire -- passed through, officials said in a Friday morning update on the national Inciweb wildfire information system. Thursday night, roughly 475 homes were evacuated in Gorman, also in Eastland County.

The Kidd Fire, by far the biggest of the four in the complex, started Thursday and had charred 42,333 acres by Sunday morning, the Texas A&M Forest Service reported Sunday morning. It was 25% contained.

A total of 142 structures have been reported lost from the Kidd Fire, the Texas A&M Forest Service said.

"Kidd fire still continues to be the main fire of concern. For operational plans today, crews will focus on completing containment lines around the Kidd fire," according to the service.

In the small town of Ranger, about 10 miles northeast of Eastland, a church and several downtown buildings burned Thursday, affiliate KTVT reported.

"I've been fire chief here 40 years and when you have something like this ... it hurts. It hurts the whole community," Ranger Fire Department Chief Darrell Fox said. "This church had been here for 100 years."

At least one other fire of the complex, the Oak Mott Fire, burned close to the town of Rising Star, according to Friday's Inciweb update. There were "multiple reports of structures saved through efforts of responders," the update said, but officials said during Friday night's news conference the town was continuing to face threats from the flames.

The Oak Mott Fire had burned more than 4,000 acres and was 60% contained by Sunday morning, according to the Texas A&M Forest Service.

A fire on the border between nearby Coleman and Runnels counties was 90% contained as of Sunday afternoon, the forest service said.

The Crews Gap Fire has burned 8,100 acres since it began a week ago.

The Coleman Fire Department said early Friday that residents returning to their homes should "stay alert and aware."