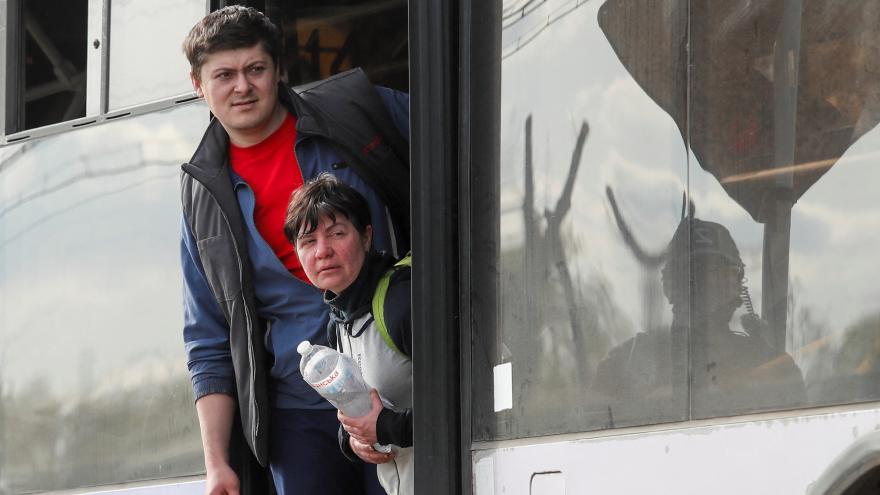 Hundreds of people -- dozens of whom are injured -- are thought to be inside the complex, the last Ukrainian holdout in the city following weeks of heavy Russian bombardment.

Nearly every building on the plant has been destroyed, new satellite images showed Saturday.

An estimated 100,000 people remain in the city, officials have said.

A first group of around 100 people had headed to the "controlled area," to be met in the Ukrainian-controlled southern region of Zaporizhzhia on Monday, Zelensky tweeted Sunday.

"Grateful to our team! Now they, together with #UN [United Nations], are working on the evacuation of other civilians from the plant," he added.

The evacuation's commencement was confirmed by the International Committee of the Red Cross, who said they would be working with the UN on the operation.

A convoy set off on Friday, traveling 230 kilometers to reach Mariupol on Saturday morning, the ICRC said in a statement.

"The ICRC insists on the fact that no details can be shared until the situation allows, as it could seriously jeopardize the safety of the civilians and the convoy. Relevant local authorities are communicating with the civilians about practical details," the statement added.

The Russian news agency TASS, citing the Ministry of Defense in Moscow, reported that 80 civilians were rescued from the "territory" of the Azovstal plant and evacuated to a Russian-controlled compound a few miles away.

It's unclear whether any of them came from within the plant itself.

"Civilians evacuated by Russian servicemen from the Azovstal plant, who wished to leave for areas controlled by the Kiev regime, were handed over to representatives of the UN and the International Committee of the Red Cross," the ministry said.

'We pray that everything works'

Earlier Sunday, the Mariupol city council had urged civilians to gather near a shopping center as there was a "chance" of an evacuation corridor to Zaporizhzhia from the besieged city.

"If you have relatives or acquaintances in Mariupol, try to contact them by all ways. Call, text and say that it is possible to go to Zaporozhzhia, where it is safe," the Council said on Telegram, instructing civilians to meet around "Port City" shopping center at 4 p.m.

"We pray that everything works," it added.

The evacuation's launch comes a day after two groups of civilians were evacuated from the vicinity of the besieged Azovstal plant, according to Russian state news agencies.

A total of 46 people had left "residential buildings adjacent to Azovstal" and "were provided with accommodation and food," TASS and RIA Novosti said, quoting the Russian Ministry of Defense.

The Russian agencies did not disclose where the evacuees were being taken.

Earlier Sunday, a Ukrainian commander inside the plant said some civilians had been evacuated from the plant Saturday following the introduction of a ceasefire.

Capt. Svyatoslav Palamar, the deputy commander of the Azov Regiment, said the ceasefire, which was supposed to begin at 6 a.m., ended up starting at 11 a.m.

Palamar said 20 women and children had been taken to the "agreed meeting point," in the hope that they would be evacuated to the "agreed destination" of Zaporizhzhia.