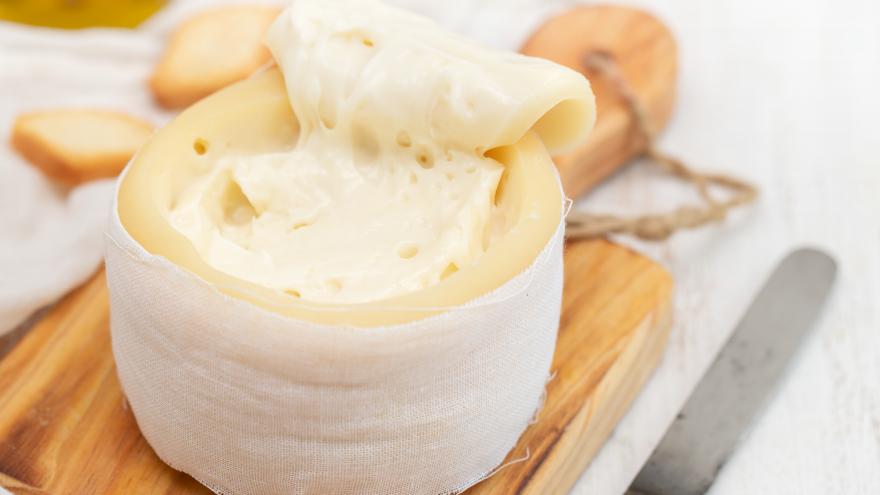 (CNN) -- It is a truth universally acknowledged that (almost) everyone loves cheese.

And it's a truth almost as universally acknowledged that Europe makes some of the best.

Here, there are thousand-year-old cheeses. There are cheeses invented centuries ago by monks, cheeses that make cameo appearances in classic literature, and cheeses given intentionally offputting names to encourage people to try them.

There are stinky cheeses, cheeses with added ash, cheeses made in stomach-churning ways, and some of the most expensive cheeses on the planet.

Everyone has their own favorite cheese, of course -- but here are 22 of ours.

Everyone knows parmesan, of course, but you might not be so familiar with this workhorse of Italian cheeses, Grana Padano. Like parmesan, it comes from Emilia Romagna in northern Italy; and like parmesan, its nutty taste, hard-flaking texture is perfect for scattering on salad or grating onto pasta. It's usually a bit cheaper than parmesan, though --- in fact, what you might think of as parmesan might actually be grana padano, which has a slightly softer flavor. That doesn't mean it's not good, though -- try it in chunks, to enjoy the grainy texture, and smear some chutney or fruit jam on top.

Sweet or savory? With gruyère, you get both -- plus a distinctive nuttiness that takes the sweetness down a notch. Made in Switzerland -- the village of Gruyères itself enjoys protected status for its cheese -- it's one of Europe's best loved cheeses, working perfectly with chutney or jam, or incorporated into recipes (even simple ones like a croque monsieur).

This pungent cheese, beloved of the Portuguese, is classed as an endangered product by the Slow Food movement, and has been given protected status by the EU. That means it can only be made in a small area of the mountainous Serra da Estrela region, and producers have to follow strict procedures. Made during the winter months from sheep's milk, it's a spreadable cheese which packs a punch when it comes to flavor.

If you've been to Greece, you've likely had the pleasure of eating halloumi: salty, rubbery, squeaky cheese which grills to perfection. Usually blended from sheep and goat milk, halloumi originated in Cyprus, but is now a staple across Greece and the eastern Mediterranean. Grill it till it's brown and crispy on the outside for the best experience.

You might think you know cheddar -- but the cheap, tasteless stuff you often find in supermarkets is not a patch on the real thing. Sharp but with a sweetness, hard but also crumbly, real cheddar -- from the town of the same name in southwest England, is a supremely well-rounded cheese that goes brilliantly on its own, with chutney, in recipes or in a simple grilled sandwich. The best stuff even can have little crystals in -- no wonder over half the cheese sold in the UK is cheddar.

This is Spain's king cheese for a reason: tangy without being offputtingly pungent, hard but with a nicely brittle edge to it, and perfectly paired with membrillo -- quince jam. Even Cervantes namechecked it in "Don Quixote," such is its popularity. Made from unpasteurized sheep's milk, it's cured for anything from a couple of months to a couple of years -- the longer, the tangier and brittler it gets.

The gray streak running through the center makes Morbier one of the prettiest cheeses on our list. In fact, that's ash -- scattered over the first layer before adding the second (originally, it was made with morning and evening milk, though that's no longer the case). Not that you'll taste it -- Morbier, which has protected status, is soft and creamy, with a slightly bitter aftertaste that stops it from being de trop.

This 2,000-year-old cheese, made in the Orobic Alps of northern Italy from cow and goat milk, has "Presidio Slow Food" status, meaning it is an endangered product, which usually costs more to make than the price at which it sells. The last part isn't necessarily true for Bitto, though, since the good stuff -- which can be aged for up to 10 years -- can net some of the highest prices on the planet for cheese.

It's not just halloumi that grills well. Havarti softens beautifully under a grill, and it also does well as a sliced cheese. Mild in taste, and semi-hard, it's named after Havartigården, the farm belonging to Hanne Nielsen, who trawled Europe to learn the best cheese-making techniques, before returning to Denmark and working her magic on the local milk.

Cheddar might be the most famous UK cheese, but few Brits would be without Wensleydale. Especially, that is, around Christmas time, when Wensleydale stuffed with cranberries is a must on cheese platters. Made by monks in northern England since the medieval period, its mild flavor and crumbly texture has made it one of the country's most popular cheeses -- it's even the favorite cheese of cartoon characters Wallace and Gromit.

In Yorkshire (where it's originally from) Wensleydale can be eaten with fruit cake.

There's blue cheese, and then there's Cabrales, hailing from Asturias in northern Spain, and aged in caves for up to five months. Particularly pungent -- thanks to its blue-green veins, and to the goat milk mixed in with cow and sheep milk -- it's semi-hard, seriously salty, and super delicious. Smear it over a biscuit but savor it -- in 2019, a four-pound wheel of cabrales was sold for a whopping $22,890 at auction, making it the world's most expensive cheese.

If you think this tastes like gruyère, you'd be correct -- it's made in the Franche-Comté region of France, which borders Switzerland, and is also known as Gruyère de Comté. Again, it's sweet, yet nutty, with a good kick of saltiness, while the consistency is equally hard. Yet devotees of both would suggest that Comté is a fraction creamier. Best try them both together to judge for yourself.

This is another of Italy's great all-round cheeses. Like parmesan and Grana Padano, it's often grated to sprinkle on pasta, but where the other two are nutty, Pecorino tastes salty. It can be made in different areas -- Sardinia does a great pecorino romano, as well as Lazio, where it originated -- but it's always made from the milk of sheep (pecora) and is always hard, flakey and bursting with saltiness. Rome's famous pasta dishes gricia and amatriciana both use Pecorino.

A crumbly, tangy white cheese, Bryndza may be best known as coming from Slovakia, but it is eaten all around the Carpathian Mountains, and its name derives from the Romanian word for cheese. Its slightly sour taste and spreadable nature makes it an excellent topping to dishes -- like bryndzové halušky, a popular Slovakian dumplings dish.

The Netherlands are known for their cheeses -- the weekly cheese market in Alkmaar, which recreates traditional weighing and carrying, is one of the country's must-see sights. You'll find the counters there full of Gouda, perhaps the most famous Dutch cheese. A glowing orange color, it's been made since the medieval period (the first written reference to it is from 1184). It can be aged for anything from a few months to a few years, and while younger cheeses are softer and taste almost sweet, the wheels get harder and nuttier the longer they age.

You may have heard of Casu Marzu, the world's most dangerous cheese -- but it's unlikely you'll be buying it, since its sale is banned. Instead, try this goat's cheese, also made in Sardinia, which is known for its sheep and shepherds. If you're squeamish, look away now -- the cheese is made from the stomach of a young kid, still full of its mother's milk. The stomach is tied shut, hung up and left to age naturally, until it becomes a pungent, almost creamy cheese. One for die-hard fans.

You know all about feta, of course; now it's time to try a lesser known Greek cheese. Mesovone hails from the remote north of the country, or more precisely, a mountain town called Metsovo. Made from cow's milk, either on its own or mixed with a little sheep or goat, it's semi-hard and naturally smoked. Like that other Greek staple, halloumi, it lends itself particularly well to grilling.

This is said to be the world's stinkiest cheese -- and of course, that's no mean feat, especially since it comes from France, where pungency is all the rage. Made in the northern coastal Pas-de-Calaise region since the 1980s, it's unpasteurized and unpressed, making it soft as well as stinky beneath that glowing orange rind. Don't forget to serve it with a hunk of baguette.

You might think sweet(ish) cheese with walloping big holes means Switzerland and Switzerland only, but sweet, nutty Jarlsberg is from Norway -- although Swiss Emmenthal was introduced to the area in the 19th century, before Jarlsberg came about. It's also produced under license in Ireland and the US -- specifically, Ohio.

Ireland's best loved cheese has a pretty, wrinkled rind, squishy, semi-soft insides -- and a mild, though slightly nutty taste. Into something stronger? There's a smoked version, too. One sweet fact -- the rind is washed daily during the curing process.

The name means "The big stinker from Moena," and that should give you an idea of how this, from Trentino in northern Italy, tastes. A traditional cheese of the Ladin people -- a separate ethnicity who live in the Dolomites -- it was originally popular with agricultural workers who liked it to spice up their limited diet. Originally called Fassa Nostrano, its name was changed in 1974, after a radio broadcast. Now, it's popular with people who just want to eat it for the name.

The warm orangy glow that this Austrian cheese gives off comes from the saffron that's mixed in with the milk, taken from cows grazing in the mountain valleys around Voralberg, in the west of the country. There's a strong Swiss influence in this area. The result? It tastes rather like a more fragrant, saffron Emmental.