Euro 2020: 'It's come home to Rome' as Azzurri makes triumphant return to Italy 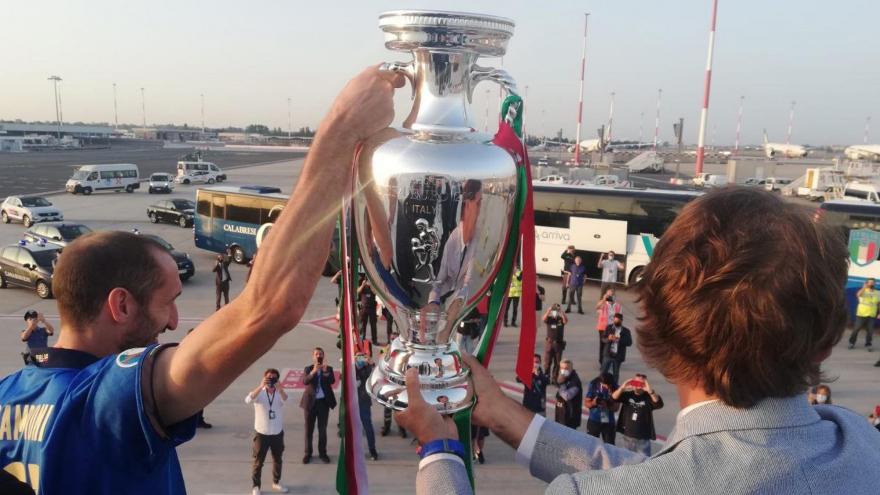 (CNN) -- The Italian squad made a triumphant return to Italy on Monday after its penalty shootout win over England in the Euro 2020 final at Wembley Stadium.

Sunday's success was the Azzurri's second European Championship victory and came 53 years after Italy's first win in the pan-continental tournament.

The Italian team arrived at Fiumicino Airport in Rome before heading to the Hotel Parco Dei Principi.

Italy captain Giorgio Chiellini and coach Roberto Mancini held the Henri Delaunay trophy on the plane steps before the players and staff boarded the bus.

When the players disembarked at the Hotel Parco Dei Principi, Chiellini was wearing a golden crown as he held the Henri Delaunay trophy.

The Azzurri were greeted at the hotel by cheering fans.

Defender Leonardo Bonucci, who scored Italy's equalizer which sent the final to extra-time and then penalties, was wrapped in the Italian flag and chanted, "We are the European champions," as he entered the hotel.

The 34-year-old Bonucci, who was immense for Italy in the final and rightly earned the man of the match award, is the oldest player to score in a Euro final.

During the wild Italian celebrations after the team's victory on Sunday, Bonucci screamed "it's coming to Rome" into the pitch side camera.

Later on Monday, Italian Prime Minister Mario Draghi will greet the Italian team at a ceremony at the Palazzo Chigi, Italy's government palace, according to a statement from his office late Sunday.

"The Italians celebrate the success of the national team at the European football championships," said Draghi in a statement.

"The Azzurri, led by coach Roberto Mancini, showed great individual performances, and an extraordinary game and team spirit. The trophy returns to Italy after more than 50 years."

"The Prime Minister, Mario Draghi, will receive the team and the technical staff at Palazzo Chigi on Monday to thank them on behalf of the entire Government," added the Italian PM's statement.

Italy's Euro 2020 victory marks an impressive return to form for a nation that failed to qualify for the World Cup finals in 2018.

Under Mancini, Italy is now unbeaten in 34 matches, a record dating back to September 2018.