Esper says US isn't looking 'to start a war with Iran, but we are prepared to finish one' 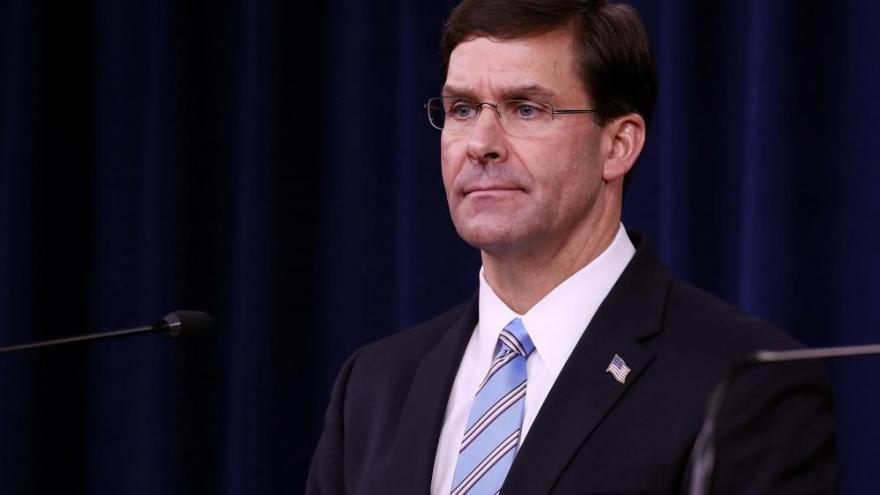 US Defense Secretary Mark Esper told CNN that the US is not seeking a war with Iran but it is "prepared to finish one." He also said the US is not withdrawing troops from Iraq following a weekend vote by Iraq's parliament to expel US troops.

(CNN) -- US Defense Secretary Mark Esper told CNN Tuesday that the US is not seeking a war with Iran but it is "prepared to finish one." He also said the US is not withdrawing troops from Iraq following a weekend vote by Iraq's parliament to expel American forces.

"We are not looking to start a war with Iran, but we are prepared to finish one," Esper said during an interview with CNN's Christiane Amanpour.

Hours after Esper spoke to CNN, Iran launched more than a dozen missiles at two Iraqi bases that hold US troops.

Earlier Tuesday, CNN had reported that US forces and air-defense missile batteries across the Middle East were placed on high alert overnight Monday to possibly shoot down Iranian drones as intelligence mounted about a threat of an imminent attack against US targets.

The alert reflects the heightened tensions between the US and Iran in the wake of last week's US drone strike that killed a top Iranian general, Qasem Soleimani. US officials have claimed the strike against the general was carried out to prevent an "imminent" attack in the region that would have put American lives at risk, but have so far declined to provide evidence.

In a statement late Tuesday, the Islamic Revolutionary Guards Corps, an elite wing of the Iranian military, said the missile attacks were "hard revenge" for the killing of Soleimani.

Esper insisted Tuesday that the US had evidence to justify last week's attack that killed Soleimani in Iraq.

"I can assure you it's more than razor thin, it's persuasive," he said when asked about the underlying intelligence.

"The fact of the matter is Soleimani was caught red handed ... one terrorist leader, of a terrorist organization meeting with another terrorist leader to synchronize and plan additional attacks on American diplomats, forces or facilities. I think we took the right action to remove these players from the battlefield," he added.

When asked if he regretted presenting President Donald Trump with the extreme option of killing Soleimani, Esper stood by the decision.

"It was time to take the terrorist leader of a terrorist organization off the battlefield," he said.

Earlier Tuesday, Secretary of State Mike Pompeo declined to present direct evidence on imminent threats against the US in the region, saying at a press briefing at the State Department that he had answered such questions during TV interviews earlier this week.

"There's been much made about this question of intelligence and imminence," Pompeo told reporters. "Any time a president makes a decision of this magnitude, there are multiple pieces of information that come before us." He added that senior officials presented Trump with the threats "in broad detail."

"If you're looking for imminence, you need look no further than the days that led up to the strike that was taken against Soleimani," Pompeo said, referring to the death of an American contractor in Iraq in late December. He said the action against Soleimani "fit perfectly within our strategy" for countering Iran.

National security adviser Robert O'Brien also said Tuesday the US had intelligence leading to the Soleimani killing that American diplomats, facilities and military personnel were at risk of attack.

"He was plotting to kill, to attack American facilities and diplomats, soldiers, sailors, airmen and Marines (who) were located at those facilities, correct," O'Brien said during a gaggle with reporters at the White House.

When asked repeatedly if he -- as the top civilian in the Department of Defense -- would refuse to follow orders from the President to strike Iranian cultural heritage sites if such an order was given, Esper insisted that the United States would "follow the laws of armed conflict" if it came to a shooting war with Iran.

Esper gave the same answer on Monday when he was pressed by reporters, ultimately acknowledging that striking cultural sites is not in line with the laws of armed conflict.

The comments came one day after Trump reiterated his threat to target Iranian cultural sites in a conversation with reporters aboard Air Force One.

The threats have been met with criticism because it is against international law to target cultural rather than military sites, and the US military's policy has long been to avoid striking areas of cultural importance.