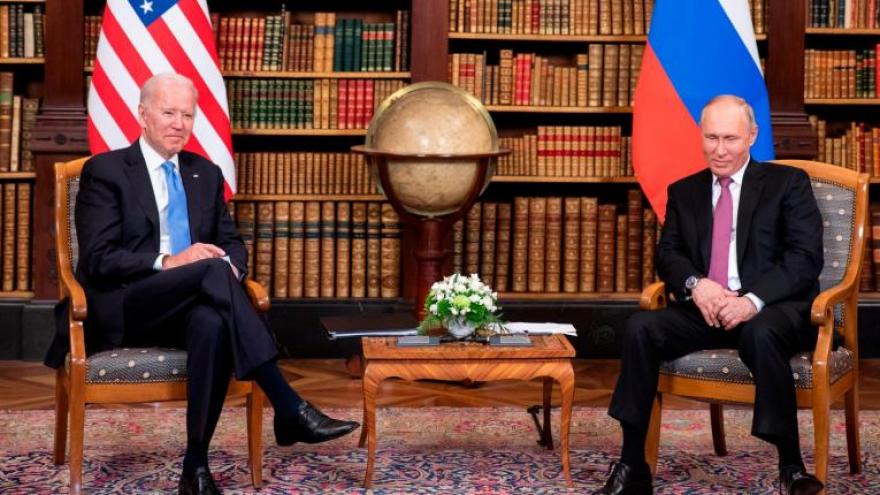 (CNN) -- Republican Sen. Joni Ernst on Sunday urged President Joe Biden to be "very clear and very strong" in his upcoming call with Russian President Vladimir Putin as US officials grow increasingly concerned about a possible invasion of Ukraine by Russia.

"I do think that President Biden needs to be very clear and very strong in his message to Vladimir Putin," the Iowa Republican told Fox News Sunday. "He needs to say to Vladimir Putin that we are no longer going to allow you to continue with the Nord Stream 2 pipeline and we need you to know and understand that we will defend Ukraine and we will provide them assistance. He needs to make that very clear," Ernst said, referring to the controversial new pipeline built to move natural gas from Russia to Germany.

A member of the Senate Armed Services Committee, Ernst stressed the need for Biden to push back against what she called "a very aggressive action" by Russia after reports of an increased Russian military presence at the Russia-Ukraine border suggested Russia could launch a military attack on Ukraine early next year.

Biden will hold "a secure video call" with Putin on Tuesday, White House press secretary Jen Psaki said in a statement Saturday. "The leaders will discuss a range of topics in the U.S.-Russia relationship, including strategic stability, cyber, and regional issues," Psaki said. "President Biden will underscore U.S. concerns with Russian military activities on the border with Ukraine and reaffirm the United States' support for the sovereignty and territorial integrity of Ukraine."

Biden said Friday that the US has "been aware of Russia's actions for a long time -- my expectation is we're going to have a long discussion with Putin."

Democratic Sen. Chris Murphy said on Sunday that while he's optimistic about the discussion between Biden and Putin, "I do think that there's no substitute for person-to-person diplomacy."

"And so I hope that this meeting, this virtual meeting between President Biden and President Putin, can bear fruit," the Connecticut Democrat told CNN's Jake Tapper on "State of the Union."

Warning against any Russian aggression toward Ukraine, he said that if "Russia does decide to move further into Ukraine, it would be a mistake of historic proportions for Moscow."

"Ukraine can become the next Afghanistan for Russia if it chooses to move further. And it's up to us in the Congress to make clear that we are going to be diplomatic, political and military partners with Ukraine," Murphy added. "That we are going to provide them with increased military assistance so that they can defend themselves. And I hope that we take steps in Congress in the next week to make that clear."

Russian forces have capabilities in place along the Ukraine border to carry out a swift and immediate invasion, including erecting supply lines such as medical units and fuel that could sustain a drawn-out conflict, should Moscow choose to invade, two sources familiar with the latest intelligence assessments recently told CNN.

Russia has denied in recent days that it has any plans to attack Ukraine but has also demanded security guarantees from the West, such as a pledge that it won't allow Ukraine to join NATO.