Eric Garner's mother says Caron Nazario, who was pepper-sprayed in a Virginia traffic stop, is part of her family 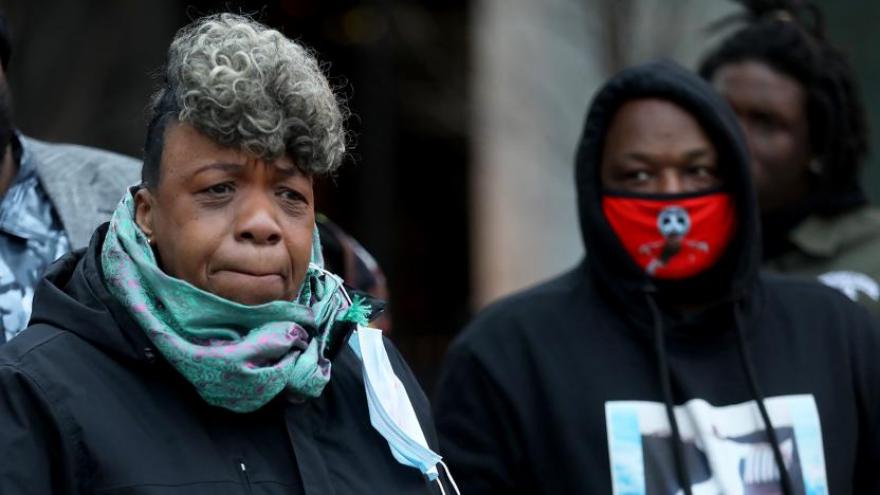 Eric Garner's mother Gwen Carr saw her son's last minutes after police put him in a chokehold six years ago. This week, she revealed that another family member -- US Army 2nd Lt. Caron Nazario -- was also involved in a controversial police encounter. Carr is shown at a press conference in Rochester, NY on March 16, 2021.

(CNN) -- Eric Garner's mother saw her son's last minutes after police put him in a chokehold six years ago. This week, she revealed that another family member -- US Army 2nd Lt. Caron Nazario -- was also involved in a controversial police encounter.

Nazario was stopped by two police officers in Windsor, Virginia, in December. During the traffic stop, for what police believed was a missing license plate, officers pepper-sprayed Nazario and pushed him to the ground with their guns out, according to body camera footage.

This month, Nazario, who is Black and Latino, filed a lawsuit seeking $1 million in compensatory damages.

"I didn't even know it (was him) when I seen the video," said Gwen Carr, Garner's mother, during a panel discussion Wednesday at the National Action Network's annual convention. "I was too shocked to know."

Carr's niece is the one who told her the man in the video was Nazario, Carr said.

"This is happening again, you know," Carr's niece said, according to Carr. "First to my cousin, then to my nephew."

Carr did not explain in her remarks exactly how she and Nazario are related, but said she saw him at a funeral in February.

"He was traumatized. He couldn't say anything about it. He thought the police was going to retaliate, but then thank God he did get it out there. And I want everybody to pray for him," she said.

Garner, a 43-year-old Black man, died after police officers attempted to arrest him for allegedly selling cigarettes illegally in New York in 2014. Video of the arrest shows an officer using a chokehold as Garner cries, "I can't breathe."

Garner's death, which occurred three weeks before the death of Michael Brown in Ferguson, Missouri, was one of the final straws that led to a surge of calls for police accountability and brought the Black Lives Matter movement to the forefront of the national consciousness.