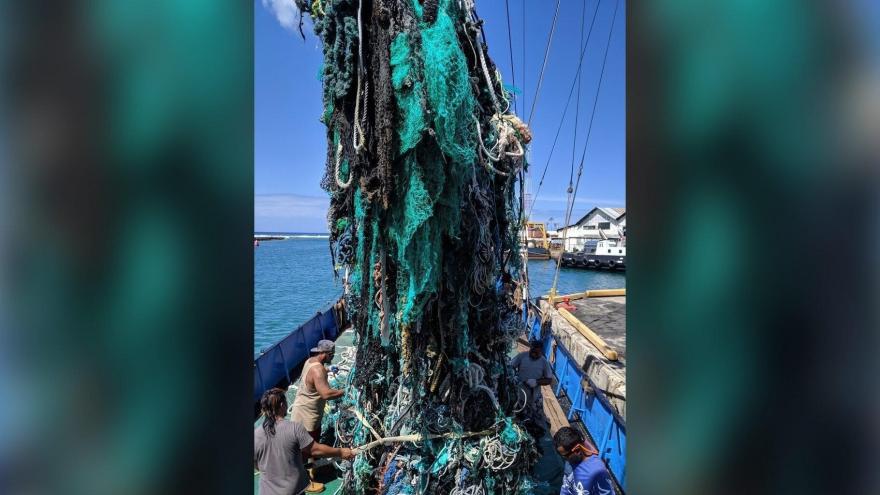 The crew from Ocean Voyages Institute collected large fishing nets like this one among the plastic debris.

(CNN) -- Environmentalists have removed more than 40 tons of plastic from the Pacific Ocean.

The group, Ocean Voyages Institute, said the cleanup mission was the "largest and most successful ocean cleanup to date" in the Great Pacific Garbage Patch. The patch, between Hawaii and California, is the biggest concentration of floating debris in the world.

About 1.5 tons of the collected plastic was given to the University of Hawaii graduate art program and individual artists on the island, Crowley said. The artists plan to transform the plastic into sculptures and other works. The remaining amount is expected to be processed by Schnitzer Steel and sent to Hawaii's H-POWER plant to be turned into energy.

There's still a lot more debris out there

Forty tons may seem like a lot -- it's equivalent in weight to about 24 cars, or 6.5 fully grown elephants.

But the 25-day expedition probably barely made a dent. It's estimated that 1.15 to 2.41 million tons of plastic enter the ocean each year.

"What we've done out there is small compared to the the magnitude of the problem, but it's scalable and can be spread," Crowley said.

"What we've already done has saved a lot of fish and dolphin and whales. It was a real proof of concept about being able to find the debris and effectively and efficiently pick it up and bring it in and have it repurposed."

Garbage patches like the one in the Pacific Ocean are formed by rotating ocean currents called gyres, which pull objects into one location, according to the National Oceanic and Atmospheric Administration.

These areas of debris endanger wildlife when animals become entangled in the trash or ingest it. The material -- ranging from plastics to other trash -- takes "a very long time" to break down, NOAA said.

Crowley said her group is planning a longer, three-month cleanup expedition in the future and hopes other organizations can follow suit.