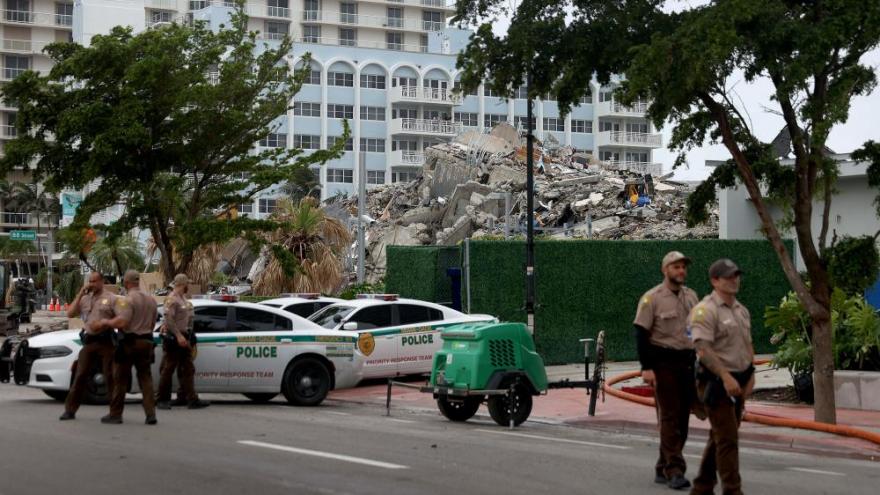 Miami-Dade police officers helping with the search and rescue stand near the completely collapsed 12-story Champlain Towers South on July 6, 2021 in Surfside, Florida.

(CNN) -- An engineer who was hired by Surfside, Florida, to analyze last month's residential building collapse said he was denied access to the site because police agencies are investigating the scene.

"Until they do their job, we can't go in to do samples of materials and take those samples and test them to understand what the various components of the building that came down was," structural engineer Allyn Kilsheimer told CNN's Ana Cabrera on Friday.

"What I'd like to have the access to first is the basement slab of the building, to go in there to do the exploratory testing of the ground, the power foundations and all that stuff to understand," he added.

The methodical search at Champlain Towers South has entered its fourth week, after the building collapsed in the early morning hours on June 24. Crews have recovered 97 bodies from the rubble and identified 94 victims as of Friday.

Officials have said other investigators, including those from the federal agency National Institutes of Standards and Technology (NIST), are on the scene.

Miami-Dade County Mayor Daniella Levine Cava said in an earlier statement, "We have a large team of engineers and other forensic experts from NIST and other federal agencies on site performing extensive testing, measurements, photographing and 3D imaging, and collection and tagging of evidentiary materials, to collect as much data as possible to support the full investigation."

Kilsheimer noted that some people living near the collapse site have expressed concern that the ground may have contributed to the partial fall of the condo building, but he said engineers don't know that since the cause of the collapse remains under investigation.

"We don't know if it's a problem in the ground or not. We need to do this testing and evaluation in order to be able to understand that," he said.

Kilsheimer said that he has not yet been able to narrow down the cause behind the collapse. While he has been able to eliminate some causes, he still found about 20 to 30 possible triggers.

"We're doing all the computer modeling and engineering of the original drawings to make sure that we feel the original designs were correct based on the code requirements at the time," he explained.

"What we can't do is now look at the materials used in the building to see if it met the requirements of the drawings."

'We are almost there': Search efforts continue

Even though more than 22 million pounds of concrete and debris have been pulled from the site, according to Miami-Dade County, crews are continuing to sift through the piles of rubble that remain.

But an already intense job just keeps getting harder.

"At this step in the recovery process it has become increasingly difficult to identify victims, and we are relying heavily on the work of the medical examiner's office and the scientific, technical process of identifying human remains," a news release from Miami-Dade County said. "This work becomes more difficult with the passage of time although our teams are working as hard and as fast as they can."

The county added that it will only report the number of victims who have been identified, "out of respect for the families who are still waiting and to ensure we are reporting the most accurate possible numbers."

"Does that mean we are almost done with the search? No. Until we clear the entire site and find no more human remains we are not done."

"We are almost there," Zabaleta added.

And while the removal of what was once homes to dozens of families is almost complete, the pain within the community isn't going anywhere.

Flowers, letters and photos are still being added to the Wall of Hope, a memorial to those who were inside on the gates of the building's tennis court.