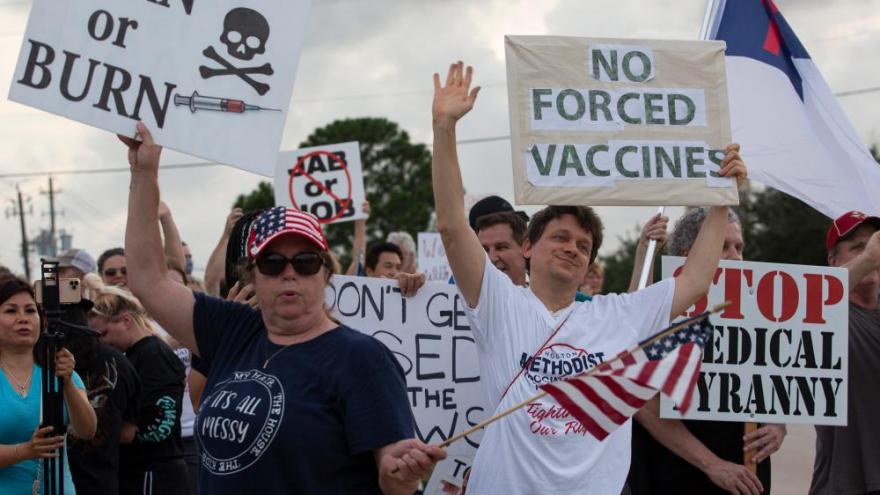 Protesters outside Houston Methodist Baytown Hospital in Baytown, Texas, on Monday, June 7. A small group of employees and supporters were protesting the hospital's policy of requiring employees to be vaccinated against Covid-19.

(CNN) -- A group of Houston Methodist Hospital workers protested on Monday the health care system's requirement that staffers be vaccinated against Covid-19, according to CNN affiliate KTRK.

Employees had to get the Covid-19 vaccine by June 7, according to Houston Methodist.

More than 100 staffers at Houston Methodist filed a lawsuit on May 28 against the health care system over its vaccine policy, saying the vaccines are "unapproved" and "experimental." The plaintiffs are asking for a temporary injunction against the policy.

Houston Methodist became the first major health care system in the US to mandate Covid-19 vaccinations on March 31, starting with managers, according to an initial announcement from Houston Methodist CEO Marc Boom.

On Tuesday, Boom issued a statement thanking those who have abided by the mandate. He said he also expected criticism for requiring the vaccine.

"As of today, we are nearly 100% compliant with our COVID-19 vaccine mandate with 24,947 of us being fully vaccinated. Houston Methodist is officially the first hospital system in the country to achieve this goal for the benefit of its patients," Boom said in the statement.

"We had only 178 full-time or part-time employees who did not get fully vaccinated or were not granted an exemption or deferral," Boom explained. "Of these employees, 27 have received one dose of vaccine, so I am hopeful they will get their second doses soon."

"A little less than 200 individuals right now are suspended, and we hope they get their vaccine over the next two weeks, but if they don't, they will be finding work elsewhere," Boom told CNN's Wolf Blitzer on Tuesday.

"I wish the number could be zero, but unfortunately, a small number of individuals have decided not to put their patients first," Boom said in his statement.

"While we celebrate this remarkable accomplishment, I know that today may be difficult for some who are sad about losing a colleague who's decided to not get vaccinated. We only wish them well and thank them for their past service to our community, and we must respect the decision they made," he added.

Boom said that he expected a measure of controversy to follow Houston Methodist's decision to require vaccinations from their employees.

"Since I announced this mandate in April, Houston Methodist has been challenged by the media, some outspoken employees and even sued. As the first hospital system to mandate COVID-19 vaccines we were prepared for this," he said. "The criticism is sometimes the price we pay for leading medicine."

Boom characterized the unvaccinated employees as a small and vocal group, "whose messaging has been co-opted by an organized, anti-vaccination movement."

The suspended employees who elected not to receive the vaccine are violating the tenets of the medical profession, he said.

Employers can require employees to get vaccinated

According to the lawsuit filed in Montgomery County District Court, the group of health care professionals says "the currently available experimental vaccines" have not received full approval from the FDA and are "investigational products."

The three Covid-19 vaccines in use in the US are authorized for emergency use, but they have not been granted formal approval by the FDA. Emergency use authorization is used when a product is new but the FDA has decided benefits outweigh the risks. Full approval requires more time and data.

The employees are represented by attorney Jared Woodfill, a former chairman of the Houston-area Republican party, according to his website. He previously sued to dismantle drive-through voting in Harris County last year and represented a group of Texas bar owners suing to reopen during the pandemic, according to a report from The Associated Press.

In the hospital's statement, Boom said that it legal for health care institutions to mandate vaccines, noting that the hospital has required employees to get the flu vaccine since 2009.

"The COVID-19 vaccines have proven through rigorous trials to be very safe and very effective and are not experimental," Boom said. "More than 165 million people in the U.S. alone have received vaccines against COVID-19, and this has resulted in the lowest numbers of infections in our country and in the Houston region in more than a year."

The federal Equal Employment Opportunity Commission said in December that companies can legally mandate that all employees re-entering the workplace and new hires be vaccinated for Covid-19. There are two exemptions companies must allow for, according to the EEOC: a disability or religious reasons.