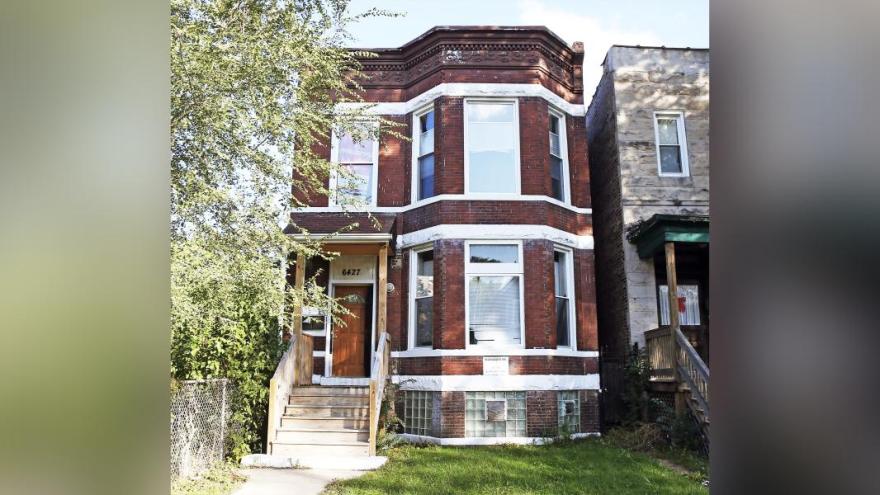 The former home of Emmett Till at 6427 S. St. Lawrence Ave., in Chicago, is seen on Nov. 9, 2017. Emmett Till grew up in a two-story, red brick house on the South Side of Chicago before leaving the city in 1955 to visit family in Mississippi, where the 14-year-old Black teen was lynched after being accused of whistling at a White woman.

(CNN) -- Emmett Till grew up in a two-story, red brick house on the South Side of Chicago before leaving the city in 1955 to visit family in Mississippi, where the 14-year-old Black teen was lynched after being accused of whistling at a White woman.

An African American cultural preservation organization on Tuesday announced that Emmett's childhood home will be one of 33 sites and organizations across the country to receive a portion of $3 million in grants.

The news comes after a recent discovery of an unserved arrest warrant for the White woman who accused Emmett of making advances toward her, sparking the events that led to his death, as well as new details about her unpublished memoir.

Leggs, who also serves as the senior vice president of the National Trust for Historic Preservation, said the 2022 selection of grant recipients highlights the beauty and complexity of Black culture and history in America.

"This year, we wanted to ensure that we were balancing public memory and not just presenting places associated with a painful past, but uplifting stories of arts, culture, entrepreneurship and achievement that are fundamental to the nation itself," Leggs said.

This is the fifth year the fund has awarded national grants to places symbolizing significant aspects of Black history, with new sites being selected every year. This year, Leggs said the $3 million encompasses grants ranging from $50,000 to $150,000 going to the various locations based on the fund's four funding categories: building capital, increasing organizational reach, project planning and education and programming.

Here are some of the sites that will be preserved, how much they received from the fund and the stories behind their cultural significance.

The home of Mamie Till Mobley and Emmett Till

In the years leading up to her son's gruesome murder that spurred the civil rights movement in America, Mamie Till Mobley and Emmett lived in a two-story Victorian house in Chicago's South Side Woodlawn neighborhood.

After Emmett's death, Till Mobley continued to live in the house until 1962, working to honor the legacy of her only son while devoting her life to the advancement of civil rights.

Last year, the house, built in 1895, was granted landmark status by the Chicago City Council.

The grant will focus on the creation of a project director position centered on programming and heritage projects, including repairing the home's interior to resemble how it looked in 1955 when Emmett last lived there.

The birthplace of bebop jazz

Detroit's Blue Bird Inn served as an institute for Black musicians who were integral to the development of modern music globally. Opened in 1937, "The Bird" featured live music and was a safe haven for Detroit's Black community who lived in a deeply segregated city post-WWII.

In 2020, the site was formally named a Historic District by the city of Detroit.

As part of the grant project, the Blue Bird will undergo a series of interior rehabilitation projects with the intent of serving as an archive, music venue and gathering space for the Detroit community once again.

A Black-owned bank that served as a 'symbol of progress'

The locally owned bank provided a space for community members to purchase shares, meaning Black residents could invest in their community.

Banks' entrepreneurial efforts are said to have subverted the racism that dictated everyday life in Mississippi in the 20th century.

The grant will be put toward exterior rehabilitation meant to solidify the bank's future as a museum and visitor center.

In 1965, civil rights organizers -- including late civil rights icon Rep. John Lewis -- met at the Brown Chapel African Methodist Episcopal Church in preparation for a march from Selma, Alabama, to Montgomery, the state capital, to advocate for voting rights.

As protesters attempted to head across the Edmund Pettus Bridge in Selma, they were met by a group of state troopers who stood ready to attack and brutalize them. The watershed civil rights moment, known as "Bloody Sunday," was a catalyst for the Voting Rights Act of 1965.

Like other Black churches at the time, the downtown church served as an organizing space for Black community members to unite and work toward racial justice efforts during the civil rights movement.

The new funds will address water and termite damage as well as replace some of the church's cupolas' structural beams.

The Eldorado Ballroom was listed in the Green Book, a guidebook that helped Black people safely navigate the country, as a "must-visit" site for African Americans in Houston, Texas.

The ballroom advertised itself as the "Home of Happy Feet" to highlight its eccentric live music performances and large, packed dance floor.

The grant project will repair and restore the ballroom's windows on the ground- and second floors.