Eminem took a knee during his Super Bowl halftime performance 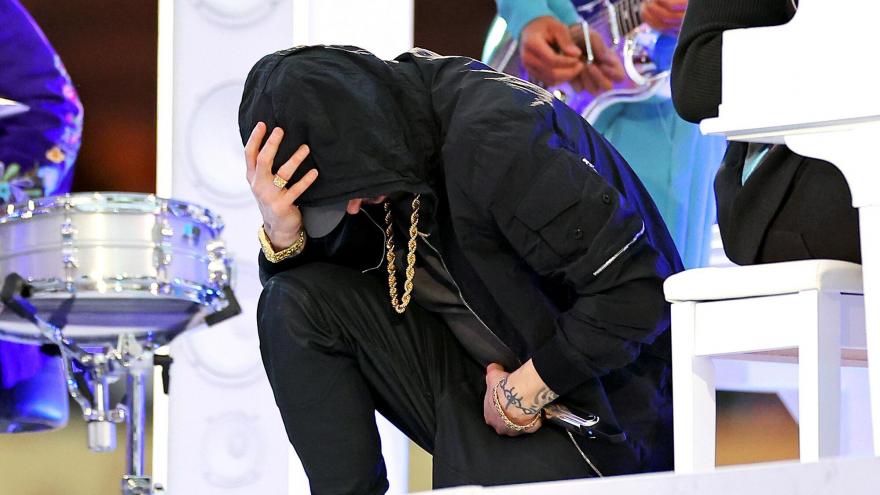 Eminem takes a knee during the Pepsi Super Bowl LVI Halftime Show at SoFi Stadium on Sunday in Inglewood, California.

(CNN) -- Sunday's Pepsi Super Bowl LVI Halftime Show not only featured some of the greatest artists in hip-hop, but it also saw Eminem taking a knee.

The kneeling took place after the rapper performed his 2002 hit "Lose Yourself." The kneeling gesture became a subject of controversy when former NFL quarterback Colin Kaepernick used it as an act of protest against police brutality and racial discrimination.

Kaepernick, former quarterback for the San Francisco 49ers, was heavily criticized for starting this form of protest during the national anthem at a 2016 preseason game.

Since then, athletes from all levels of sports have knelt during the national anthem in solidarity with Kaepernick and his message.

Eminem has a history of supporting Kaepernick's efforts. In 2017, during the BET Hip Hop Awards, he performed an explosive 4.5-minute freestyle rap, calling out former President Donald Trump and embracing Kaepernick and his message on racism and police brutality.

The Detroit rapper raised his fist and rapped: "F— that, this is for Colin, ball up a fist and keep that s— balled like Donald the b—-."

Eminem also included Kaepernick in the lyrics of his 2017 song "Untouchable," where he rapped: "Somebody has to be the sacrificial lamb ... So they call it a Kaepernick tantrum ...

If you don't stand for the national anthem ... We raise it, you better praise it."