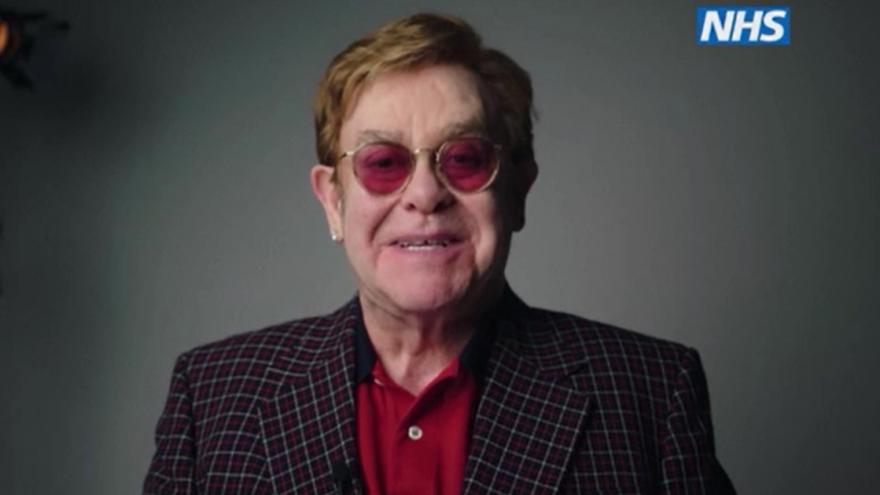 (CNN) -- Elton John and Michael Caine have released a video encouraging Britons to get vaccinated for Covid-19, as the country prepares to widen its rollout to younger adults.

The video, backed by the UK's National Health Service (NHS), sees John "audition" for a role in a vaccine information campaign.

The legendary British singer tries out a Michael Caine impression but fails to impress the casting team -- before Caine himself makes a cameo. Both celebrities have already been vaccinated against the coronavirus, the NHS said.

Their appeal for more Brits to get inoculated comes as the UK looks to broaden its rollout. Britain has already vaccinated more than 12 million people with at least one dose, and is now asking people aged 70 and over in England who haven't been vaccinated to book an appointment.

"I wanted to take part in this film to help show people the benefits of getting vaccinated and how it helps protect ourselves and the people we love," John said. "So, I hope we can all come together and do our bit in the fight against this wretched disease."

In the video, the 73-year-old sings his 1980s hit "I'm Still Standing" after pretending to receive a shot. The spoof also sees Caine, 87, tell viewers the vaccine doesn't hurt -- before adding his trademark phrase, "Not many people know that."

Chief Executive of NHS England Simon Stevens said that vaccine uptake in older populations had been very high, and that the campaign was a way to encourage others who can take up the vaccine to do so.

"Well over nine out of ten people aged 75 and over have already taken up the offer of their NHS Covid vaccination, and now we want to encourage everyone in the high priority groups to do so," Stevens said.

"That's why we're grateful to Sir Elton and Sir Michael for helping the NHS promote vaccine uptake," he added.

The government has pledged to offer a vaccine to everyone in its four highest-risk groups by mid-February.

Despite the strong uptake, community protection can only be achieved when a vast majority of the population has been vaccinated, and scientists have warned of the challenges posed by misinformation and vaccine hesitancy in achieving that milestone.