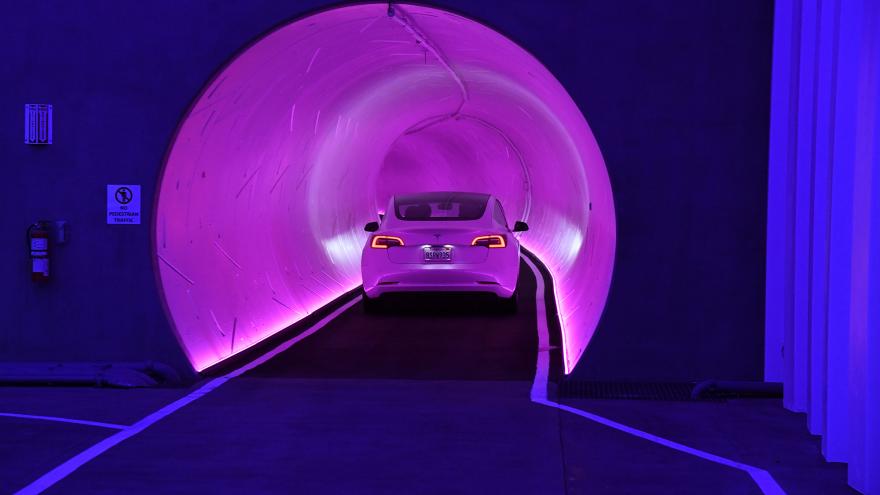 (CNN) -- The Boring Company, Elon Musk's bid to beat traffic by putting Teslas in tunnels, has raised $675 million, which it plans to use to build more of its Loop projects.

Loop is a mostlyunderground transportation system that offers point-to-point trips between stations where people board Tesla SUVs. One Loop system is already operating in Las Vegas with two stations that are about a mile apart at the Las Vegas Convention Center. There are plans to expand the system throughout the Vegas strip, with 51 stations over 29 miles.

The Boring Company is also developing a project in Fort Lauderdale, Florida, and is in conversations with San Antonio, Texas. It's previously announced projects in Chicago, Washington, DC and Los Angeles, but has not completed them. It faced a lawsuit from unhappy Los Angeles neighbors, and fell out of favor when Chicago elected a new mayor. Permits have not been completed for its DC to Baltimore project, which dates back to 2017.

He said the government is collaborating with the Boring Company on engineering issues on the project, which would connect downtown and a nearby beach. They're working to align the route on a right of way that the city has more control over. He declined to say when it might be completed.

Critics have questioned if essentially running a subway system, but with cars rather than trains, is an efficient use of tunnels, which can cost as much as $1 billion per mile to build. The Boring Company says it's developing cheaper tunneling technology, and argues its system is superior to traditional subway systems because trips will be point-to-point, and not make any planned stops, like at other stations. (But they could potentially be slowed by tunnel traffic ahead of them.)

Musk, the CEO of Tesla, previously pitched a more grandiose vision for the Boring Company, with people being whisked through cities in dedicated autonomous vehicles at speeds up to 120 mph. But the reality so far, in Las Vegas at least, has involved human drivers operating what resemble standard Teslas at 35 mph.

The Boring Company still says it plans to eventually transition to fully autonomous operations, which will reduce the cost of operations.

Sequoia said in a blog post that the Boring Company is at an "inflection point."

"The next few years are about 10x'ing performance by making their systems rapidly reusable and fully autonomous," it wrote.

The Boring Company says its next generation machine for digging tunnels is designed to be capable of operating remotely and autonomously, requiring no one in the tunnel. Its current iteration of the machine, called Prufrock, is designed to dig up to a mile per week. Digging tunnels quicker is critical to lowering costs.

The Boring Company has said it also plans to build utility and freight tunnels. It did not respond to a request for comment.