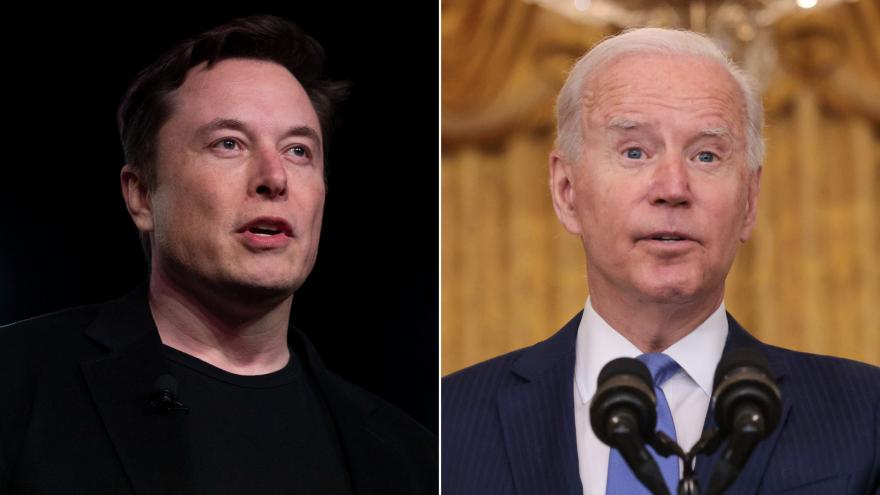 When someone asked Musk on Twitter why Biden hadn't acknowledged the accomplishment, the SpaceX and Tesla CEO offered some choice words.

Later, someone else tweeted with an image from the movie "Alien," labeling the alien grabbing onto the face of an astronaut as "UAW" and the victim as "Biden." Musk responded with a tweet that said, "Seems that way." Musk has been in battles with the United Auto Workers union, which thus far has failed to organize workers at Tesla's factories.

The SpaceX flight received multiple tweets of congratulations during and after the flight from Bill Nelson, the former senator who Biden appointed as NASA administrator.

"Low-Earth orbit is now more accessible for more people to experience the wonders of space," he tweeted last week after lift-off. "We look forward to the future — one where NASA is one of many customers in the commercial space market. Onward & upward."

Biden has been good for Musk

In a number of ways the Biden administration has been very good to Musk's companies. SpaceX has NASA contracts to deliver both supplies and US astronauts to the International Space Station. Many predate Biden taking office, but the company has gotten additional NASA contracts this yearL In April it was awarded a $2.9 billion NASA contract to build spacecraft that will land astronauts on the moon for the first time in five decades, despite protest from Blue Origin, the rocket company led by Amazon founder Jeff Bezos, which had also sought the contract.

Tesla has greatly benefited from regulatory tax credits it sold to other automakers who were not complying with tougher emission rules. Tesla, which sells only EVs, has an excess supply of those credits that can be sold. Those credits could get more valuable if the Biden administration toughens emissions rules as it has proposed to do.

Until the most recent quarter, Tesla would never have turned a profit without the benefits from the sale of those credits, and back when it was still losing money the credits also helped fund its early operations.

Tesla also benefited in the past from a $7,500 tax credit to buyers of electric vehicles, a fact that allowed it to charge more for the cars.

Buyers of EVs made by Tesla and General Motors no longer qualify for that tax credit because of the number of plug-in cars they have delivered in the past.

Biden has supported restoring a $7,500 tax credit to buyers of electric vehicles, no matter who built them, which would be a benefit for Tesla, although they would be limits on the price of the car and the income of the buyer for it to be claimed, so it wouldn't necessarily apply to all Tesla sales.

Language in version of the legislation that passed the House Ways and Means committee last week to give an additional $4,500 tax credit to EVs made with union labor and another $500 for those with batteries made in the United States. Although Tesla does make its batteries here, it is a nonunion company.

Apparently because of its nonunion status, Tesla was not invited to a White House event with Biden in which he announced plans to toughen emission rules and called for ambitious goals to shift from gasoline powered cars to EVs. GM, Ford and Stellantis, which have union labor, all appeared, as did representatives from the United Auto Workers union.

Biden, who is seen as perhaps the most union-friendly president in history, has been working to keep the UAW supportive of the push for electric vehicles, despite concerns within the union that a switch to EVs could cost some jobs because they require perhaps as much as one-third less hours of labor to assemble due to fewer moving parts.