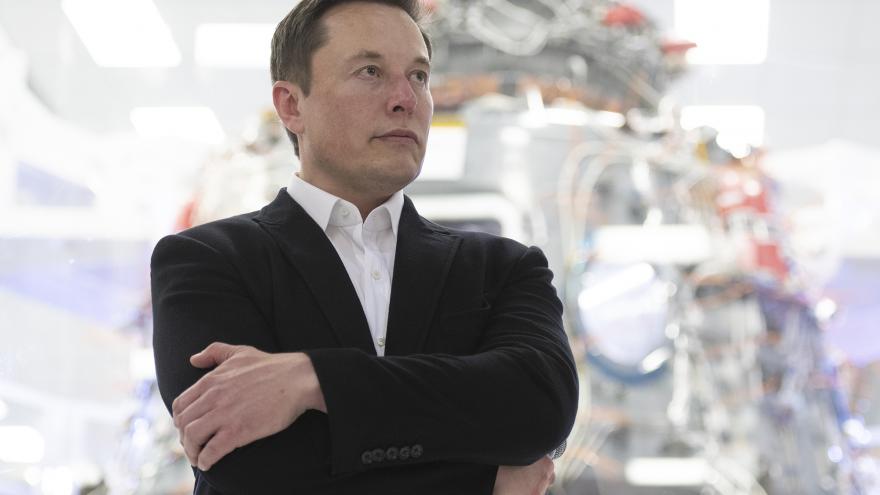 (CNN) -- Tesla CEO Elon Musk sold $8.5 billion of the electric automaker's stock in the three days after the Twitter board agreed to sell the company to him.

Musk sold 3.7 million shares of Tesla stock on Tuesday, for a total of $3.3 billion, and another 735,000 shares on Wednesday, bringing in $654 million, according to filings he made with the Securities and Exchange Commission late Thursday.

Friday morning he disclosed that he had sold an additional 5.2 million shares for a total of $4.5 billion. All told, he received an average price of $883.09 per share.

The sales represent only 5.6% of the Tesla shares he held outright at the start of the day Tuesday, and less than 4% of his total holdings of Tesla if stock options he controls are included.

The filings do not disclose the reason for the sale, but Musk appears to be raising funds to buy Twitter.

In a tweet Thursday evening, after the initial filings but before the disclosure of Thursday's sales, Musk said, "No further TSLA sales planned after today."

Company insiders, such as Musk, must report purchases or sales of their company's stock to the SEC to inform the broader investment community of their activity. But they have a couple of days to make that filing and still comply with the rules.

Musk's sales of Tesla shares were large enough to sink the company's stock price. The 3.7 million shares sold on Tuesday represented 17% of the normal daily trading value in Tesla shares so far this year before Tuesday. Tesla shares lost 12.2% of their value during the course of trading Tuesday, the biggest one-day drop in the company's stock since September 2020. The stock's decline prompted a selling spree by other investors, as 45 million shares traded hands -- about twice the volume of trades from the day before.

Tesla investors could also have sold shares this week out of concern that Musk would be unable to give as much time and attention to Tesla. The company has ambitious growth plans and growing competition.

Shares of Tesla hardly changed Wednesday and Thursday. The stock was up 3% in early afternoon trading Friday, as his tweet apparently assured investors that his sales were complete.

"How much he's going to have to sell now appears to be known. That's the reason for the bounce in the stock," said Gene Munster, managing partner of Loup Ventures. "I actually thought he'd have to sell more shares than this."

But Tesla shares are still down nearly 18% since the day before Musk revealed he became Twitter's largest shareholder. The uncertainty of what the Twitter deal will mean for Tesla and Musk's commitment to the company has become an overhang on Tesla's stock, said Dan Ives, tech analyst with Wedbush Securities.

"Besides the distraction issues, it brings the circus-like situation back into a Tesla story that has nothing to do with Tesla," said Ives. The uncertainty about the Twitter deal -- shares are trading about 8% below the agreed-upon purchase price -- only adds to the uncertainty for what Musk will do with his Tesla shares, Ives said.

"He says it's the end and that makes me believe it likely is," Ives said. "But the Street will be watching closely to see if it truly is the end."

Musk is expected to use his massive Tesla holdings as a way to finance his purchase of Twitter. But that doesn't mean he needs to sell all his shares to raise the full purchase price. Instead he can use the shares as collateral for loans to raise the cash.

As of June 30, 2021, company filings show Musk already pledged 88.3 million of his Tesla shares as collateral, but those shares were pledged years ago when Tesla shares were worth a small fraction of their current value. He would likely be able to borrow more money even against some of those shares.

Even if Musk doesn't use those shares as collateral, the estimated 67 million unpledged shares that he owns after this week's sales could be used to borrow nearly $17 billion — even with the recent decline in Tesla's share price.

But Munster said Musk probably doesn't want to go right up to that maximum, because if Tesla stock falls further he could be forced to sell some shares in the future.

"This is a pretty volatile stock. It's up 10 times in value in just the past few years. Those stocks can go back down," he said.

Correction: An earlier version of this story misstated the initial number of Tesla shares Elon Musk sold, the value of the shares, and when he sold them. Musk sold 4.4 million shares, worth $4 billion, Tuesday and Wednesday.