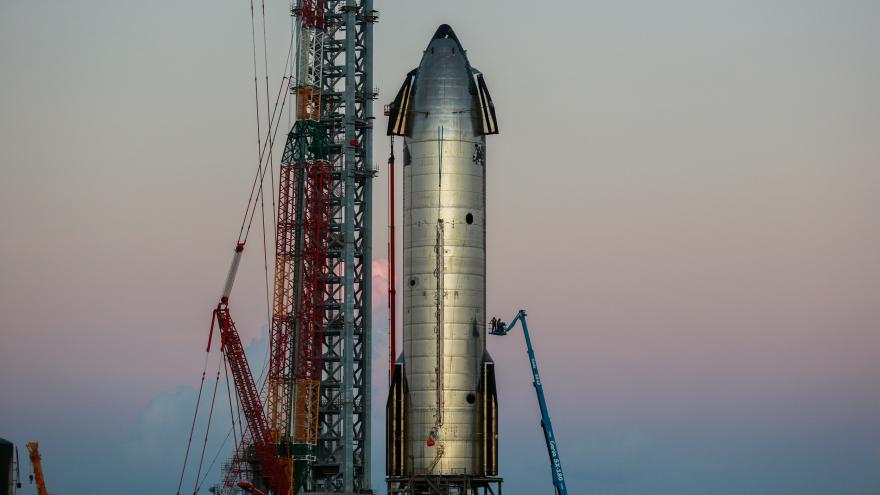 (CNN) -- SpaceX CEO Elon Musk spoke for over an hour Thursday night in a hotly anticipated discussion about Starship, which the company hopes will one day take humans to Mars and that will play a key role in NASA's plans to return humans to the moon for the first time in a half century. Still, not many new details were shared.

Musk once again said that he wants to pursue a city on Mars, but did not provide any updates in regard to who would live there or how it would be governed. And he reiterated how some design changes, like an updated rocket engine design, will help reduce costs.

Many more unanswered questions remain. NASA has awarded SpaceX a contract to take astronauts to the moon, but Musk didnot delineate what testing SpaceX will have to do before it can carry out its promised crewed missions, nor what the roadmap will look like to getting Starship ready for a moon or Mars mission.

But Musk used the media event to engage with his core fanbase and employees, touting the company's progress during a speech that was back-grounded by the full Starship vehicle — spacecraft and rocket — on a launch pad just behind Musk at the company's South Texas facilities.

SpaceX has been working at a rapid clip to get Starship ready for launch, but so far the company has only sent early prototypes on a few so-called "hop tests," and it's still waiting for regulatory approval to put the vehicle atop its gargantuan rocket booster and attempt to send it to orbit. Musk said that the company had managed to lower the cost and weight of its individual Raptor rocket engines, in large part by consolidating parts and changing flanges to welds in the design. Musk also said that the second generation of the Raptor engine would produce more thrust than the first generation.

The update comes more than two years after Musk announced Starship's first space tourism customer, Japanese fashion mogul Yusaku Maezawa. Maezawa paid SpaceX an undisclosed amount of money to secure a seat for himself and a group of artists on a Starship trip around the moon, hoping it could take off as soon as 2023. Maezawa is still in the process of deciding who he'll take with him.

Musk did hint that there will be more Starship sales announced in the future, but declined to share Thursday, noting he didn't want to steal the spotlight from customers who may be planning their own announcements.

Starship is at the core of SpaceX's plans to develop the technology necessary to establish a human settlement on Mars.

SpaceX has achieved regular crewed flights to the International Space Station, sent the first all-tourist crew to orbit, and made its mark as the exciting-newcomer-turned-reliable-mainstay of the US aerospace industry.

But as NASA demonstrated in the mid-20th century, going from brief jaunts to space to getting a spacecraft all the way to the moon isn't easy. And to this day, no human has ever traveled as far as Mars. For all of Musk and SpaceX's achievements, there is still a long way to go. And for all that Musk has achieved, he has also accrued a reputation for missed deadlines on ambitious projects.

Since 2019, however, SpaceX has mostly been in show-don't-tell mode, executing about a dozen test flights of various early prototypes that went from hopping a few feet off the ground to soaring more than 30,000 feet. A few high-altitude tests ended in explosions as the test rockets smashed back into the ground. But its latest test launch, in May 2021, managed to land upright without bursting into flames.

Lately, SpaceX has largely been waiting for federal regulators to clear the full-scale Starship for the first orbital launch attempt. It'll be no small feat — getting to orbit requires speeds that exceed 22 times the speed of sound, and to get the Starship spacecraft moving that fast, it'll ride atop a towering rocket booster, called Super Heavy, affixed with roughly 30high-powered engines.

And even then, going to Mars entails more challenges than just building a rocket to get there.

On Thursday, SpaceX showed off the vehicle fully stacked, with the Starship spacecraft sitting atop its Super Heavy booster on the company's newly constructed orbital launch pad that lies next to a remote stretch of beach on the Gulf of Mexico. Large "grabber arms" held the rocket in place, as Musk's dream of rapidly reusable rockets would entail a need for the rocket to return to its launchpad after hurling its payload into orbit.

If successful, Starship will become the most powerful rocket humanity has ever launched, boasting up to twice the power of the Saturn V rocket NASA used to take astronauts to the moon in the 1960s.

Before Starship can even get to space, however, SpaceX needs to get a thumbs up from the Federal Aviation Administration, which licenses commercial space launches in the United States.

Musk had indicated the company was prepared to launch Starship's orbital test flight as soon as July of last year.

But the back half of 2021 was full of hangups. The FAA was carrying out an environmental assessment to review what the impact would be of launching such a massive rocket from a stretch of rural Texas coastline. A public comment period in October aired the voices of many local residents strongly opposed to the idea, as well as some fervent supporters who weren't necessarily from the area.

Though SpaceX initially expected to get the all-clear by the end of 2021, according to the FAA, the environmental assessment will continue until at least February 28, 2022.

The agency cited "the high volume of comments submitted" and "discussions and consultation efforts with consulting parties" as reasons for the delay.

Musk did not provide a firm update on the anticipated approval, but said that if the FAA required a more thorough review, the company would likely shift some operations to Cape Kennedy in Florida.