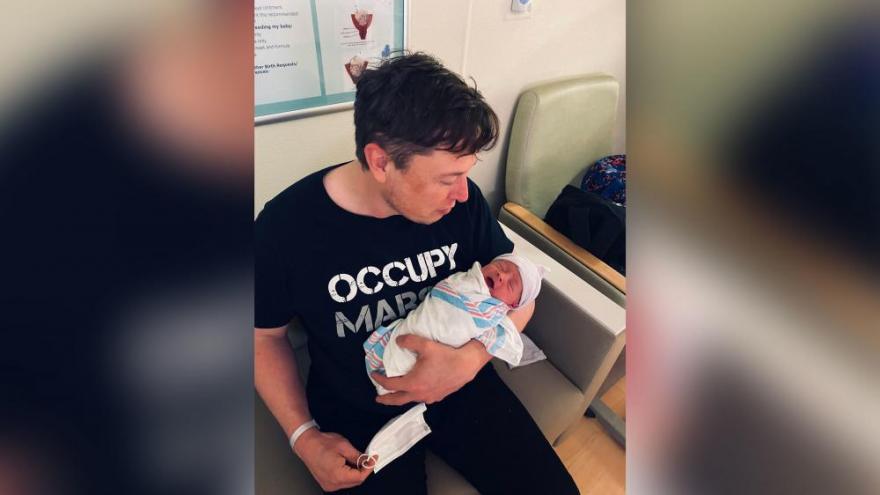 Musk confirmed the news Monday after a fan asked if there was any update on the baby.

"A few hours away!" Musk responded on Twitter before sharing the news that the baby boy had been born. "Mom & baby all good," he added a few hours later.

When someone asked the baby's name, Musk replied "X Æ A-12 Musk" and shared a photo of the baby with a filter that gave the newborn face tattoos.

"Never too young for some ink haha," he joked.

This is the couple's first child together. Musk has five other children -- twins Griffin and Xavier and triplets Damian, Saxon and Kai -- from a previous marriage.

Grimes first confirmed the pregnancy in January when she posted on Instagram describing the difficulties of being pregnant while working.

"I feel like I was woefully ill prepared (because) I (don't know) if pregnancy is as visible or discussed as it should be," Grimes said in the post.

"I just didn't (really) understand what I was getting into. It's been good too, but it makes working a lot harder. Good at writing and having lots of wild ideas (though), but anything physical is hard. I'm also way more emo and less capable of bravery in the face of haters online and stuff haha."

The Canadian singer, whose real name is Claire Elise Boucher, also revealed that she had early complications but a better second trimester.

Her fifth studio album, "Miss Anthropocene," was released in February.