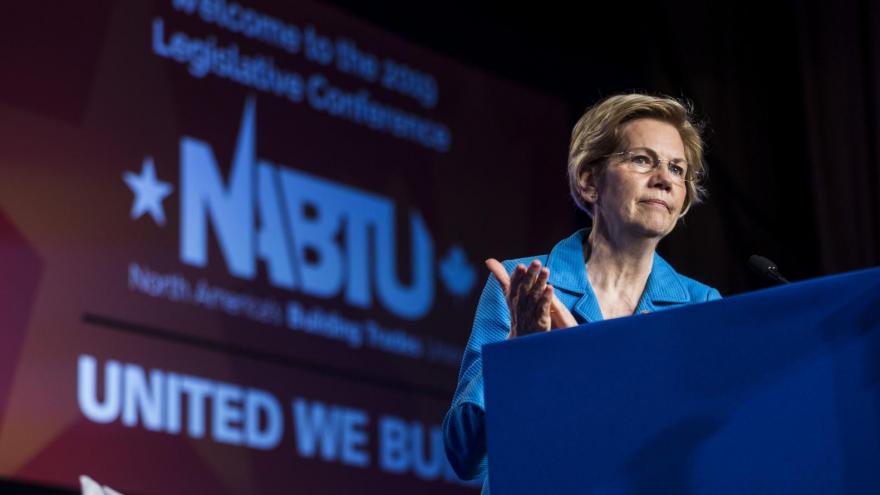 Sen. Elizabeth Warren on Monday proposed eliminating the student loan debts of tens of millions of Americans and making all public colleges tuition-free, staking out an ambitious stance on one of the central policy debates of the 2020 Democratic primary.

(CNN) -- Sen. Elizabeth Warren on Monday proposed eliminating the student loan debts of tens of millions of Americans and making all public colleges tuition-free, staking out an ambitious stance on one of the central policy debates of the 2020 Democratic primary.

Student debt and college affordability have become a key dividing line in the Democratic race, between more progressive candidates who favor sweeping new tuition and student-loan benefits and others who support more incremental adjustments to the way Americans pay for education.

Warren's new plan would forgive $50,000 in student loans for Americans in households earning less than $100,000 a year. According to analysis provided by her campaign, that would provide immediate relief to more than 95% of the 45 million Americans with student debt. The Massachusetts Democrat and 2020 contender is also calling for a drastic increase in federal spending on higher education that would make tuition and fees free for all students at two- and four-year public colleges and expand grants for lower-income and minority students to cover costs like housing, food, books and child care.

The campaign estimates that the plan would cost $1.25 trillion over 10 years.

The revenue from Warren's wealth tax proposal -- a 2% tax on wealth above $50 million and a 3% tax on wealth above $1 billion -- would pay for her newest proposal, her campaign said. According to details shared by her campaign, the massive debt cancellation and free college plan additionally asks states to chip in to cover the cost of tuition and fees. Warren has also said her universal child care proposal would be paid for by her wealth tax.

Asked about connecting the viability of her new proposal to another, Warren insisted that there is broad support for the idea of taxing the ultra-rich.

"For two cents on the dollar, we could pay for universal child care, universal pre-K, universal college and knock back the student loan debt burden for about 43 million Americans and still have nearly, just short, of $1 trillion leftover," Warren said in an interview with CNN. "It tells you how badly out of whack our economy is right now."

Warren -- a co-sponsor of Sen. Bernie Sanders' 2017 legislation that would make four-year public colleges tuition-free for some students -- said her new plan is "bigger" and "goes further" than Sanders', who is also vying for the Democratic nomination.

"It covers more and it addresses both the access question of going to college and the problem of the debt burden for our students," she said.

The former college dropout and law professor described the proposal as one of the most "personally important" of her growing White House platform.

"I got married at 19 and I took a job answering phones and I thought that was going to be my whole life. And the fact that there was a commuter college about 45 minutes away that I could pay for on a part-time waitressing job -- you know, it opened a door," said Warren, who has made the story a fixture of her stump speech. "It all started with that chance in college."

But Warren's proposal of forgiving outstanding student debt goes a significant step further than previous Democratic policy plans. (One bill introduced in Congress last year did call for using revenue from President Donald Trump's tax cuts to cancel all student loans, but it was largely viewed as a political rebuttal to the President and gained little traction in Congress.)

Warren's plan would offer debt relief based on income. Households that make less than $100,000 a year would get $50,000 in loan cancellation, with the amount of relief getting gradually smaller as income level goes up, with households that make more than $250,000 not eligible for any debt relief.

Altogether, it would wipe out all student debt -- including both federal and private loans -- for more than 75% of Americans with outstanding loans, according to analysis provided by Warren's campaign.

The "Universal Free College" portion of Warren's plan makes public college free for everyone, regardless of their finances. While Sanders' 2015 proposal offered free tuition for everyone, a 2017 bill scaled back eligibility based on income -- language built on a compromise proposal agreed on between Sanders and Clinton during the 2016 election.

Warren's proposal also makes significant investments to help lower-income and minority students afford the non-tuition costs associated with attending college. She wants to invest an additional $100 billion in Pell grants over the next 10 years, making them available to more students and increasing the size of the award. Currently, the lowest-income students are eligible to receive about $6,200 a year from the federal Pell program.

"It's not just paying the tuition. It's how they pay for books," Warren told CNN. "It's how they pay for the expenses of having a baby taken care of if they already have a child at home or being able to cover commuting expenses or maybe it's a chance to live in a dorm and have the kind of college experience that other kids can."

There is broad support among the Democratic presidential candidates for making college more affordable, though they differ on how to do so. Sens. Cory Booker, Kamala Harris, and Kirsten Gillibrand -- along with Warren -- are all co-sponsors of Sen. Brian Schatz's Debt-Free College Act. It would establish a matching grant to states that commit to helping students pay for the full cost of attendance without taking out loans.

But other candidates -- including Sen. Amy Klobuchar and South Bend, Indiana, Mayor Pete Buttigieg -- have stopped short of embracing a free-college platform.

"I am not for free four-year college for all, no," Klobuchar said at a CNN town hall in February, though she noted she would support making community colleges free.

Buttigieg has argued that free college would result in those who earn less because they didn't go to college subsidizing those who did go to college and tend to enter higher-paying careers. But he has called for expanding Pell grants and incentivizing states to invest more money in higher education.

Asked whether she agrees with Buttigieg's analysis, Warren answered: "No."

"The way we build a future where everyone's got a chance is we start out by investing in their education," Warren said.

Since announcing an exploratory campaign on New Year's Eve, Warren has released sweeping policy proposals at a rapid clip. They include the wealth tax, universal child care and a proposal to break up the biggest tech companies.

Warren is unapologetic about her heavy focus on policy.

"Look. Policy is personal. It touches people's lives," she said. "People come up to me in tears talking about their student loan debt. People talk to me about their fear that healthcare is going to be taken away. People talk to me about drugs, prescription drugs that they take that they simply can't afford. The way we fixed these problems? It's with policy. It's policy that touches where people live."