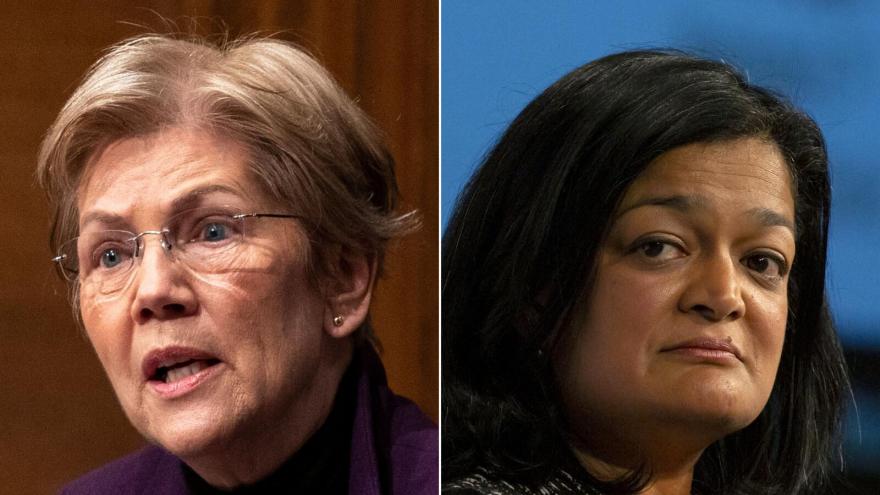 Now that Democrats control the White House and Congress, President Joe Biden and other party leaders are pushing to spend big to revive the economy and address income inequality.

(CNN) -- Now that Democrats control the White House and Congress, President Joe Biden and other party leaders are pushing to spend big to revive the economy and address income inequality.

The three Democrats unveiled the Ultra-Millionaire Tax Act on Monday morning. It would levy a 2% annual tax on the net worth of households and trusts between $50 million and $1 billion as well as a 1% annual surtax on assets above $1 billion, for a 3% tax overall on billionaires.

The controversial proposal, which is co-sponsored by Vermont Sen. Bernie Sanders and others, is similar to the one Warren pitched in 2019 as a Democratic primary candidate. Taxing the rich served as a primary way for Warren and Sanders to fund their plans to expand health coverage, child care and other proposals when they were vying for the primary nomination.

"As Congress develops additional plans to help our economy, the wealth tax should be at the top of the list to help pay for these plans because of the huge amounts of revenue it would generate," Warren said in a statement. "This is money that should be invested in child care and early education, K-12, infrastructure, all of which are priorities of President Biden and Democrats in Congress."

About 100,000 American families would be subject to the tax, which would raise around $3 trillion over a decade, according to an analysis provided by the lawmakers. It was conducted by University of California Berkeley Professors Emmanuel Saez and Gabriel Zucman, who are well-known for their left-leaning work on income and wealth inequality.

The revenue estimate is higher than the one with which they provided Warren during the campaign in part because the wealth at the top, particularly among billionaires, has grown over the past two years and is expected to continue increasing, they said. Two years ago, they estimated it would raise $2.75 trillion over a decade and affect 75,000 households.

Though the coronavirus triggered a steep economic downturn in the US, it has had a very disparate impact on American families. Higher-income households have largely kept their jobs through telecommuting, and stock market gains have increased their net worth. Those at the opposite end of the scale have been hit disproportionately by layoffs and have had a harder time find new jobs during the so-called "K-shaped" recovery.

Taxing wealth, however, could be very difficult to do. There are questions about whether it is permitted by the US Constitution, with legal scholars falling on both sides of the argument.

Also, wealth taxes can be tough to administer since the rich often have assets that are hard to value.