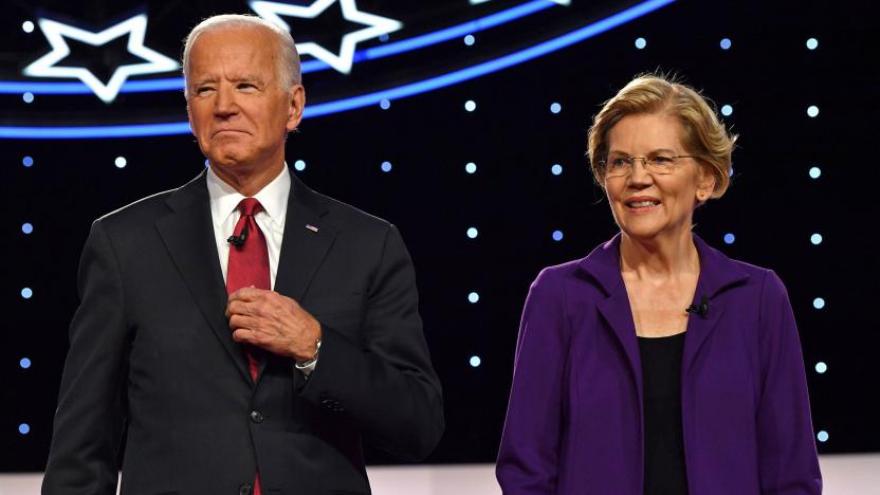 The former 2020 Democratic presidential candidate tweeted out her endorsement with a video message, noting the empathy Biden extends to struggling Americans.

"Empathy matters. And, in this moment of crisis, it's more important than ever that the next president restores Americans' faith in good, effective government," Warren says. "Joe Biden has spent nearly his entire life in public service. He knows that a government run with integrity, competence, and heart will save lives and save livelihoods. And we can't afford to let Donald Trump continue to endanger the lives and livelihoods of every American."

"That's why I'm proud to endorse Joe Biden as president of the United States," she added.

Biden touted Warren's endorsement on Twitter, writing, "We are in a battle for the soul of this nation and I'm proud to have the fiercest of fighters, Senator @ewarren, on my side. With her help, we're going to beat Donald Trump and create a government that works for everyone — not just the wealthy and well-connected. Let's do this."

Warren is the last of Biden's top former rivals to throw their support behind the former vice president. The endorsement comes as the Democratic Party attempts to unify and turn its focus to a general election campaign against President Donald Trump. Former President Barack Obama endorsed his former running mate on Tuesday.

Warren's endorsement comes two days after Sen. Bernie Sanders officially got behind Biden's campaign, with the Vermont senator calling on his allies to now support the presumptive Democratic nominee.

When Warren ended her campaign last month, there was intense speculation about whether she would get behind either Biden or Sanders.

But as time passed and Biden continued to grow his delegate lead, when asked about a potential endorsement, Warren publicly said that she was focused on the coronavirus pandemic and also that she wanted to give Sanders "space to decide what he wants to do next."

Warren, a leader in the progressive movement, was at one point considered a top contender for the Democratic nomination. The Massachusetts senator centered her presidential bid on fighting corruption in Washington, and released more than 70 comprehensive policy plans that addressed a wide range of issues. But after disappointing finishes in primary contests across the country on Super Tuesday and failing to build a broader political coalition in a Democratic Party, Warren ended her presidential campaign in March.

Warren, who is more aligned with Sanders on policy positions and ideology, was fiercely critical of the former vice president in the primary campaign. The same night former South Bend, Indiana, Mayor Pete Buttigieg, Minnesota Sen. Amy Klobuchar, and former Texas Rep. Beto O'Rourke endorsed Biden, Warren said at a rally in Los Angeles that "no matter how many Washington insiders tell you to support (Biden), nominating their fellow Washington insider will not meet this moment." Biden had previously accused Warren on a radio show of having an "elitist attitude," and told donors that her campaign was based on a "my-way-or-the-highway attitude."

But in an attempt to win over progressive voters, Biden has been taking steps to embrace his former rivals, including Warren, and adopt parts of their platforms. Biden in March backed Warren's bankruptcy proposal to repeal portions of a law Biden and Warren had clashed over 15 years earlier. Biden and Warren in 2005 had a high-profile battle over a bill that made it more difficult to declare bankruptcy, when Biden was a Delaware senator and leading advocate of the measure and Warren was a Harvard professor and vocal opponent. Warren is an expert on bankruptcy law and was an adviser to the National Bankruptcy Review Commission in the 1990s.

Warren alluded to their past disagreement over bankruptcy in her endorsement video, saying, "Joe Biden was there at the very moment I became a senator -- he swore me in. And when he did, he said 'you gave me hell! And you're gonna do a great job.'"

"Because that's the thing about Joe: He wants you in the fight with him. And when you're in the fight with Joe at your side, you know you have a partner who's committed to getting something good done for this country," she said.

This story has been updated to reflect Warren announcing her endorsement.