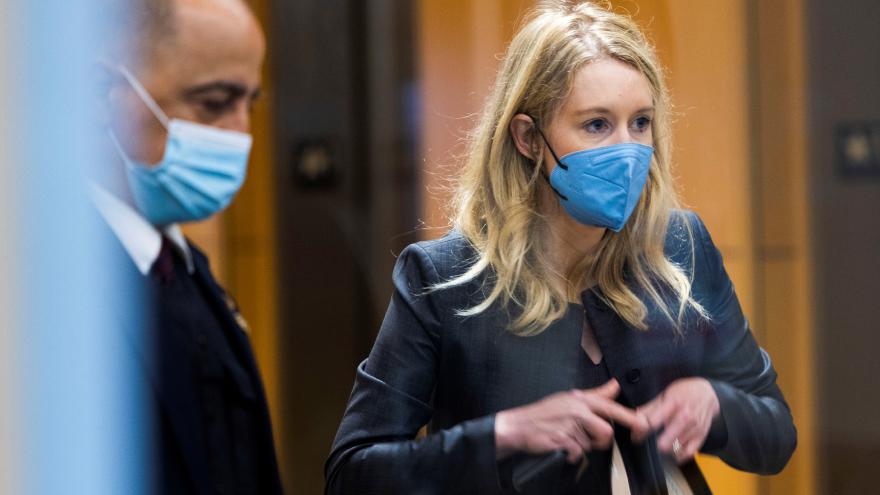 (CNN) -- Journalist Roger Parloff, who wrote the first major cover story on Theranos' Elizabeth Holmes and later issued a retraction, was called to testify in her criminal trial Thursday.

The government has alleged Holmes used the media, and Parloff's Fortune Magazine story titled "This CEO is Out for Blood" in particular, to perpetuate a scheme to defraud investors.

Parloff's testimony comes as the government has said it is close to resting its case against Holmes. She faces a dozen counts of federal fraud and conspiracy charges, and up to 20 years in prison over allegations that she knowingly misled doctors, patients and investors in order to take their money. Holmes has pleaded not guilty.

Holmes was for a time upheld in the media as a rare female founder who'd raised significant sums of capital and driven her startup to an eye-popping $9 billion valuation. Parloff's story was the first of many laudatory cover stories of Holmes and has been shown repeatedly in the San Jose courtroom.

Through Parloff's testimony, the government is piecing together the various layers of the alleged fraud that it has spent more than 10 weeks establishing before jurors through witness testimonies. Parloff testified he has 10 hours of audio recordings from interviews associated with his 2014 Fortune story, clips of which have been played for the jury. The recordings contrast how Holmes represented the company's capabilities with what jurors have heard from other witness testimonies.

Parloff's article, which contained false and misleading statements, was circulated to stakeholders and how it played a role in validating the company to outsiders.

"This morning I had one of the most interesting meetings I can recall with the women [sic] profiled in the attached Fortune magazine article," read one email shown to jurors from the CEO of RDV Corp, the family office of the billionaire family of former Education Secretary Betsy DeVos. The email was sent to members of the DeVos family before they invested $100 million into Theranos.

Investor Chris Lucas, whose firm Black Diamond Ventures invested more than $7 million across two funding rounds in 2006 and 2013, testified earlier this month that the piece made him "proud of the situation. Proud that we are involved. Proud of Elizabeth."

In a column more than a year later titled "How Theranos Misled Me," Parloff acknowledged that the article "helped raise to prominence" Holmes. (There is now an author's note at the top of his original article that links to the column and reads, "On December 17, 2015, I published a protracted correction to this article here.")

"As much as I'd like to say that Holmes lied to me, I don't think she did. I do believe I was misled — intentionally — but I was also culpable, in that I failed to probe certain exasperatingly opaque answers that I repeatedly received," wrote Parloff, who was formerly an attorney.

The government said in a court filing that it will not seek to admit the follow-up column but "reserves the right to introduce that article for a non-hearsay purpose should the defense open the door by questioning Parloff about statements he made in that article."

For weeks, attorneys have been wrangling over what Parloff can testify to, and what information he can be compelled to provide. While Parloff has turned over audio recordings and notes from his interviews with Holmes and former Theranos COO Ramesh "Sunny" Balwani as part of a grand jury subpoena order, he successfully fought a trial subpoena order by Holmes' defense team for notes and recordings from interviews he conducted with others for his story. (Balwani faces the same charges as Holmes; his criminal trial is slated to begin next year. He has also pleaded not guilty.)

Holmes' attorneys argued those notes may serve to refute the claims that Holmes misled Parloff, and through him, investors. Judge Nathanael Cousins, who presided in a hearing on the matter, called the quest for Parloff's additional notes "a fishing expedition as to whether there might be material out there that could be helpful to the defense."

Parloff's remorse over the story has been well-documented.

"Roger was first [to the story] and felt a tremendous amount of guilt," said Alex Gibney in 2019. Gibney is the prolific documentary filmmaker whose HBO film, "The Inventor," chronicled the rise and fall of Theranos. Gibney, who has said his work started with interviewing journalists who felt duped, has called Parloff the "beating heart" of his film. (CNN and HBO share a parent company.)

In addition to Parloff's article, a 2013 piece by a Wall Street Journal opinion writer, who has since passed away, has been frequently brought up in the courtroom. The government has alleged that, prior to its publication, Holmes approved the piece, which offered a glowing look at Holmes and Theranos, but also contained misleading claims about the company's capabilities at the time. The article corresponded with a broader unveiling of the startup after years of operating in stealth and was leveraged by Holmes as validation of the company.

In a statement to CNN Business in September, Journal spokesperson Steve Severinghaus said, "editors make publishing decisions based on their independent judgment."

The statement continued, "Our writer asked Elizabeth Holmes to confirm complicated facts on a technical subject, not to approve publication. Our writer visited Theranos, spoke with numerous sources in and outside the company about its technology, and had his blood tested on a Theranos machine that appeared to offer credible results. If that was all a deception, then the responsibility lies with Ms. Holmes and Theranos."